When it comes to individual taxes, key Republican legislators seem to think “reform” is mainly about limiting or eliminating certain itemized deductions, rather than about raising revenue in ways that do the least damage to the economy (by minimizing tax distortions and disincentives). 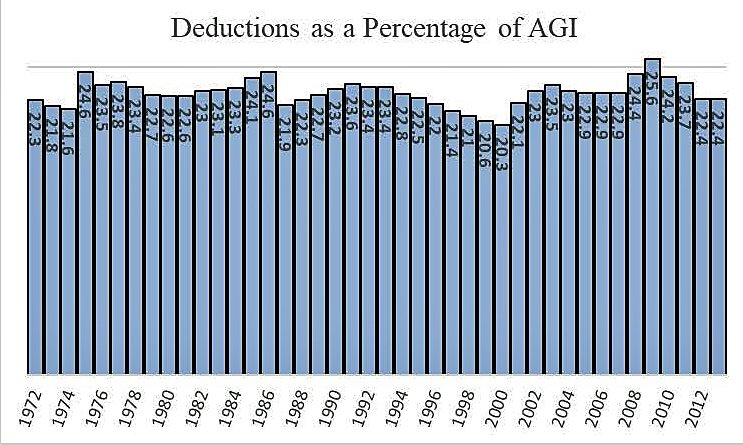 Note that total deductions were also unaffected by the fact that the maximum marginal benefit of itemized deductions (the amount saved per dollar) had fallen to 28–31% from 1988 to 1992. President Obama proposed to limit itemized deductions to 28% of the amount spent, but we already tried that in 1988–90, without success. Whatever the effect of the 1986 law eliminating several itemized deductions, plus the deep reduction in the marginal tax benefit, both were overwhelmed by the larger standard deduction.

If the standard deduction soon rises to $24,000 per couple, as the GOP proposes, even couples with a $100,000 income would automatically have higher than average deductions.

The graph also shows that the ratio of deductions to income is clearly cyclical – rising in recessions like 1975 and 2009 because income fell more than deductions, then falling during the 1997–2000 stock boom as incomes (including capital gains and stock options) grew faster than deductions.

Laws to limit itemized deductions, unlike booms and busts, have never had a noticeable lasting impact, largely because of Congressional fondness for raising standard deductions (and refundable tax credits, a super-loophole not counted here).

Doubling the standard deduction to $24,000 per couple appeared to be the primary revenue-losing objective of the GOP Big Six plan (losing $890 billion over 10 years by one estimate).  Meanwhile, there have been reports of backpaddling on trial-balloons about ending property tax deductions and curbing contributions to 401(k) plans.  It is not difficult to imagine the end result being that any revenue gained from limiting deductions barely offsets revenue lost by expanding the standard deduction, leaving deductions still stuck around 22–23% of AGI.

That would be like 1986 but with one big difference. In 1986, the top tax rate was cut by 22 percentage points, leaving a nearly-flat 15–28% rate structure. This year, by contrast, high-income taxpayers are not giving up big deductions and personal exemptions for a lower-rate, since the top rate is apparently to stay at 39.6%. Itemized deductions go down, personal exemptions completely vanish, yet targeted tax credits get larger (e.g., for children under age 17) and the standard deduction goes up. Tax-deferred contributions to retirement savings plans may be deeply slashed.

By rejiggering exemptions, deductions, and credits with essentially no change in the highest, most damaging tax rates, the individual side of the Republican “tax cut” is shaping up as a sizable tax increase for well-educated two-earner couples with college-age kids living in high-cost metropolitan areas, among others.