E-Verify is the federal government’s national identification system that some employers currently use to verify the employment authorization of their new hires either voluntarily or under a requirement by state law. The Legal Workforce Act (LWA) would make this program mandatory for all employers in all states. Its proponents contend that E-Verify is simpler than the current I-9 form process and that it will protect employers from government raids and I-9 audits. But these talking points are false, and seemingly for this reason, employers refuse to use it voluntarily.

In 2017, 729,595 employers participated in E-Verify. Using a calculation from a USCIS-commissioned study, this figure corresponds to 9.5 percent of the 7.7 million private sector employers, which is somewhat higher than the actual level because some E-Verify users are public employers. It also greatly inflates the level of voluntary compliance. Only 10 states and D.C. have greater than 10 percent participation in E-Verify—all of them have expansive E-Verify mandates of some kind. To achieve this level of compliance, states need to require E-Verify for some private sector employers—either by fining non-users or rescinding subsidies from them. President Bush’s 2008 executive order mandating E-Verify for federal contractors drives the relatively high level of compliance in D.C.

Nearly half of all employers who use E-Verify operate in the 10 top E-Verify-using states, while only 17 percent of the businesses operate there. Only 6 percent of the 40 states without the more expansive mandates use E-Verify. As the Figure below shows, the true level of “voluntary” compliance is undoubtedly much lower than 6 percent. Another dozen states have various E-Verify requirements for public employers or contractors, and federal contractors exist in every state, meaning that it’s impossible to determine the precise level of voluntary participation. 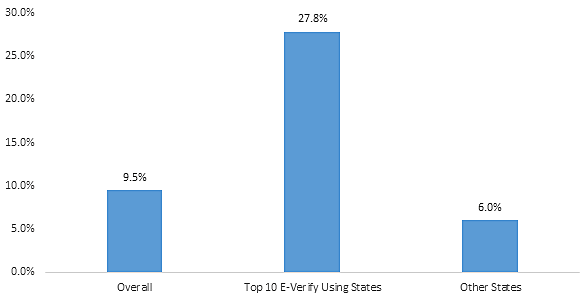 Unfortunately, USCIS has not released more recent data since 2013 on the size of the businesses using E-Verify, but assuming the 2013 proportions, 98 percent of businesses with less than 10 employees were not using E-Verify in 2017. The numbers also reveal that even when the law requires businesses to use E-Verify, they are reluctant to do so. Even in Alabama, which has achieved the highest E-Verify participation rate with a universal E-Verify requirement, less than half of the state’s businesses actually use the program. Arizona, which has the oldest universal E-Verify requirement and where two intentional violations can result in the “business death penalty,” actually fares worse. Only 39 percent of businesses use the program.

These facts demonstrate that most businesses—especially small businesses—do not consider E-Verify “business friendly.”