The $822,000-per-Year Bureaucrat and the Death of California

Over the years, I’ve shared some outrageous examples of overpaid bureaucrats.

Hopefully we’re all disgusted when insiders rig the system to rip off taxpayers. And I suspect you’re not surprised to see that the worst example on that list comes from California, which is in a race with Illinois to see which state can become the Greece of America.


Well, the Golden State has a new über‐​bureaucrat. Here are some of the jaw‐​dropping details from a Bloomberg report.

The numbers are even larger in California, where a state psychiatrist was paid $822,000, a highway patrol officer collected $484,000 in pay and pension benefits and 17 employees got checks of more than $200,000 for unused vacation and leave. The best‐​paid staff in other states earned far less for the same work, according to the data.

Wow, $822,000 for a state psychiatrist. Not bad for government work. So what is Governor Jerry Brown doing to fix the mess? As you might expect, he’s part of the problem.

…the state’s highest‐​paid employees make far more than comparable workers elsewhere in almost all job and wage categories, from public safety to health care, base pay to overtime. …California has set a pattern of lax management, inefficient operations and out‐​of‐​control costs. …In California, Governor Jerry Brown hasn’t curbed overtime expenses that lead the 12 largest states or limited payments for accumulated vacation time that allowed one employee to collect $609,000 at retirement in 2011. …Last year, Brown waived a cap on accrued leave for prison guards while granting them additional paid days off. California’s liability for the unused leave of its state workers has more than doubled in eight years, to $3.9 billion in 2011, from $1.4 billion in 2003, according to the state’s annual financial reports. …The per‐​worker costs of delivering services in California vastly exceed those even in New York, New Jersey, Illinois and Ohio. 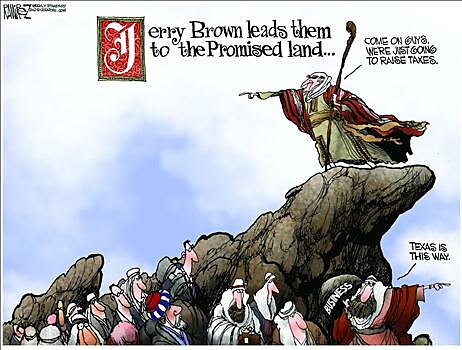 Actually, it’s not just that he’s part of the problem. He’s making things worse, having seduced voters into approving a ballot measure to dramatically increase the tax burden on the upper‐​income taxpayers.


I suppose the silver lining to that dark cloud is that many bureaucrats now rank as part of the top 1 percent, so they’ll have to recycle some of their loot back to the political vultures in Sacramento.


But the biggest impact of the tax hike—as shown in the Ramirez cartoon—will be to accelerate the shift of entrepreneurs, investors, and small business owners to states that don’t steal as much. Indeed, a study from the Manhattan Institute looks at the exodus to lower‐​tax states.

The data also reveal the motives that drive individuals and businesses to leave California. One of these, of course, is work. …Taxation also appears to be a factor, especially as it contributes to the business climate and, in turn, jobs. Most of the destination states favored by Californians have lower taxes. States that have gained the most at California’s expense are rated as having better business climates. The data suggest that many cost drivers—taxes, regulations, the high price of housing and commercial real estate, costly electricity, union power, and high labor costs—are prompting businesses to locate outside California, thus helping to drive the exodus.

Yet another example of why tax competition is such an important force for economic liberalization. It punishes governments that are too greedy and gives taxpayers a chance to protect their property from the looter class.