$61 Billion in Cuts in Perspective

Talk of a government shutdown is heating up. The current continuing resolution funding the government is set to expire on March 4th. Last week, House Republicans passed a bill that would fund the remainder of fiscal 2011 at $61 billion below fiscal 2010 levels. Senate Democrats are balking at the $61 billion in cuts and the president has issued a veto threat.


The following chart measures $61 billion in cuts against the president’s fiscal 2011 estimates for total federal spending, the deficit, and interest on the debt: 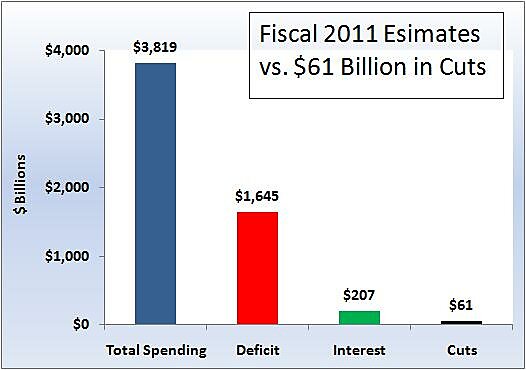 As the chart shows, the proposed cuts amount to less than a third of what taxpayers will pay in interest on the debt alone this year.


The $61 billion in cuts, which are woefully insufficient, would come from a relatively small category of government spending (non‐​defense, discretionary spending). However, that merely indicates the need to tackle defense spending and budget‐​busting “mandatory” programs. Unfortunately, the president’s latest budget proposal punted on these critical areas, and the Republicans have yet to put forth a plan let alone a coherent message.