Recent Gallup polling finds that 58% of Americans view themselves as “haves” while 38% say they are “have nots.” Nevertheless, most Americans (54%) reject the premise that the United States is a rigid economic hierarchy, while 45% say it’s a fair depiction. 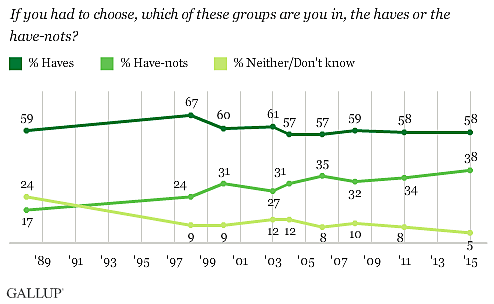 
These data suggest that Americans have begun to focus more on economic status with increasing debate over rising income inequality.


Interestingly, while Hispanics are more likely (51%) to say they are a “have not” when pressed, a fully 60% reject the premise that America is “divided into haves and have nots.” This suggests that Hispanic Americans believe in upward income mobility. While some may not view themselves as a “have” today they or their children could be eventually.


While African‐​Americans are about equally likely as Hispanics to say they personally are a “have not” (48%), 69% view the country as divided between “haves” and “have nots,” 32 points higher than Hispanics.


White Americans tend to agree (57%) with Hispanics that America is not a divided land of “have” and “have nots,” however, they are about 20 points less likely to say, when pressed, they personally are a “have not.”

The share of Americans who think they are winners of the economic system has remained fairly constant over the past decade. However, more Americans are beginning to think the overall system is rigged in favor of economic division, but this view is not necessarily a product of their own experience. Instead, passionate public discourse over income inequality has likely played a key role in changing Americans’ perceptions about how the system works for others.