Most would probably agree that this year’s race has already exceeded expectations in terms of sheer entertainment value, but as we head into January the presidential campaign season will really start to heat up. Foreign policy is poised to play an even bigger than expected role in this election, thanks to the many fires burning across the globe. In particular, of course, every candidate will have to explain how he or she intends to grapple with the mess in the Middle East. Unfortunately, as we heard during the most recent debates, most of the answers so far involve more American military intervention.

Over at the Council on Foreign Relations, Micah Zenko has started keeping track of all the candidates’ calls for the use of force. The Presidential Candidates Use of Force Tracker, as he calls it, is a wonderful public service, providing voters with an easy way to compare the candidates’ proposals for intervening in Iraq, Syria, and elsewhere. What’s missing, however, is an even quicker way to compare just how interventionist one candidate is compared to the others.

In order to simplify the data provided by Zenko and his research associate, Amelia M. Wolf, I have created a scoring system so we can compare the candidates more easily. I call it the "Presidential Candidate Intervention Meter." The Intervention Meter is based on an analysis of proposals made between August and December 14, 2015 and quantifies each candidate’s interventionist position by scoring each proposal for the use of force according to how expansive, expensive, or entangling it is. A call for the major use of ground force, for example, earns more points than a call for the limited use of Special Forces. Likewise, carpet-bombing proposals score higher than calls for air support of Iraqi troops (the scoring rules follow at the end of this post).

Admittedly, the Intervention Meter is a simple and not entirely scientific tool. Reasonable people will disagree on exactly how many points to assign each type of proposal as well as how to categorize each of the proposals. Nor can a single score encompass all the complexity and consequences of a policy proposal. Nonetheless, by applying the same scoring process to each candidate’s policies the Intervention Meter contributes to the conversation about what level of military intervention each candidate would pursue as president.

So, what do we find when we run the analysis? There have been 67 calls for the use of force to date, an average of four per candidate; 25 for the use of ground forces, 17 for airstrikes, 20 for no fly/safe zones, and 5 for non-specific action to combat terrorism globally. The average candidate score was 181. Unsurprisingly, Senator Graham topped the chart, scoring 360 points in our inaugural edition thanks to his appeal for sending U.S. ground troops to the Middle East. More surprising, perhaps, is the fact that Hillary Clinton took the second spot. This was due in large part to the fact that although Clinton has called for a somewhat less interventionist approach to the Middle East (i.e. no major use of ground troops), she has called for the unlimited global pursuit of terrorists, which earned her an extra 100 points in our scoring system. With Graham out of the race Clinton now leads the field over the not much less hawkish Senator Marco Rubio.

At the other end of the spectrum, Senator Rand Paul unsurprisingly brings up the rear as the least interventionist candidate, along with Governor O’Malley. Governor Christie also scores quite low given the hawkish tone he has struck in all of the Republican debates thus far. It seems likely that as the campaign progresses and he continues to press his case as the counterterrorism expert that we will see his score go up. Senator Sanders, on the other hand, may not deserve quite as high a score as he gets. Although he has called for air support for Iraqi forces in the fight against ISIS, most of his score comes from a half-hearted call to combat terrorism worldwide in response to a question in the last Democratic debate.

Things will shift as the campaign moves forward. It will be interesting to see how the Republican candidates do or don’t shift their interventionist rhetoric as they approach the primaries and then again when the eventual nominee launches into the general election. Meanwhile, Hillary Clinton is already running as the most hawkish and interventionist Democrat in a very long time. Having staked out such a position as she appeals to Democratic primary voters, it is hard to see her becoming any less interventionist in the general election as she begins to appeal more energetically to moderate voters. 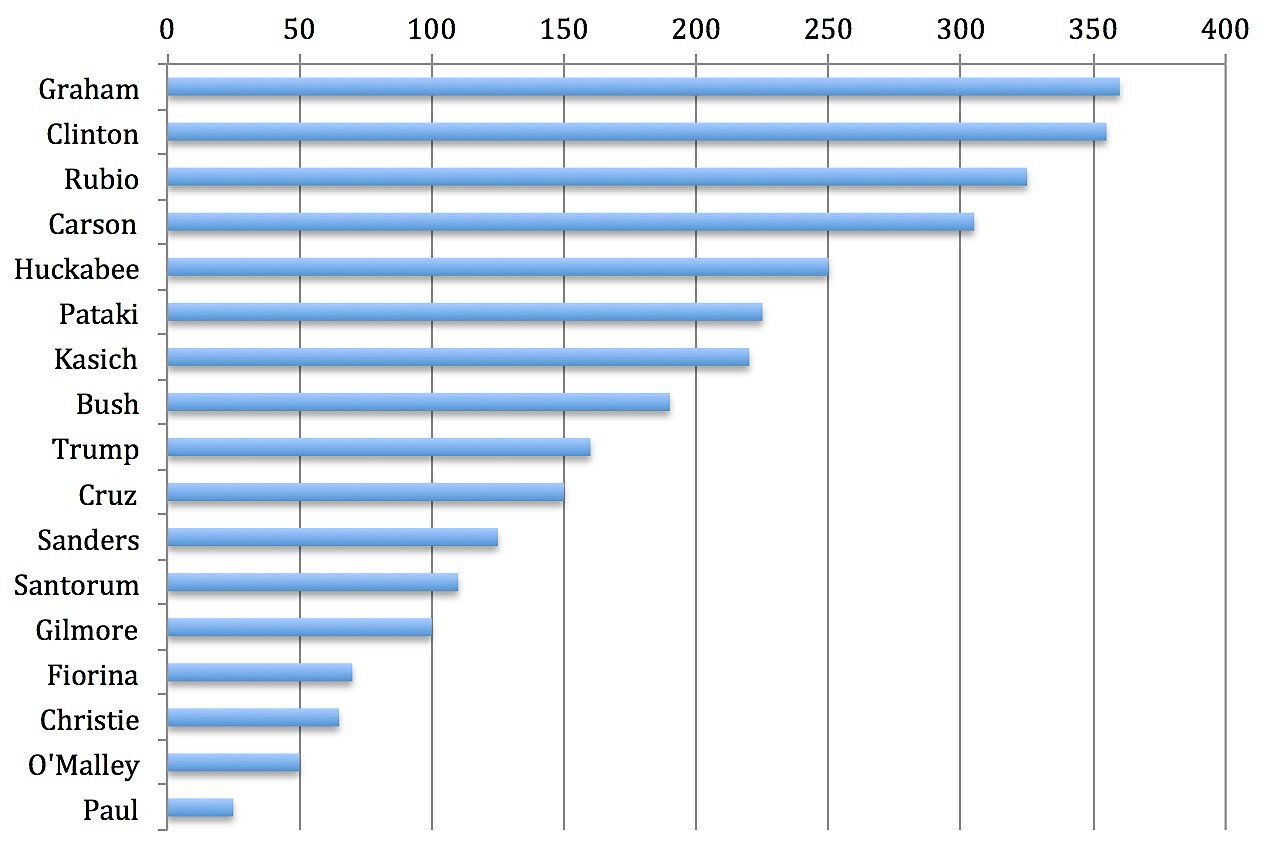 Calls for No Fly/Safe Zones: 10 points