$2 Trillion in Cuts in Perspective


Cutting $2 trillion in federal spending sounds like a lot, but it’s actually relatively small because the cuts would likely occur over ten years. According to the Congressional Budget Office’s most recent budget baseline, the federal government will spend almost $46 trillion over the next ten years.


The following chart shows what $2 trillion in spending cuts over the next ten years looks like when measured against the CBO’s baseline. Even with the cuts, federal spending would still increase by $1.8 trillion: 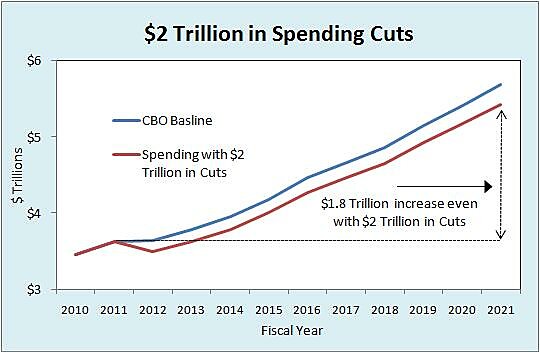 Rather than actually cutting spending, federal spending (and debt) would continue to grow – just at a slightly lower rate. And as Chris Edwards continues to warn, there is a strong possibility that some or all of the “cuts” could be phony.