We hate to be the party poopers, but the new regulations will do no such thing.

The EPA’s regulations seek to limit carbon dioxide emissions from electricity production in the year 2030 to a level 30 percent below what they were in 2005. It is worth noting that power plant CO2 emissions already dropped by about 15% from 2005 to2012, largely, because of market forces which favor less-CO2-emitting natural gas over coal as the fuel of choice for producing electricity. Apparently the President wants to lock in those gains and manipulate the market to see that the same decline takes place in twice the time.  Nothing like government intervention to facilitate market inefficiency. But we digress.

The EPA highlighted what the plan would achieve in their “By the Numbers” Fact Sheet that accompanied their big announcement.

For some reason, they left off their Fact Sheet how much climate change would be averted by the plan. Seems like a strange omission since, after all, without the threat of climate change, there would be no one thinking about the forced abridgement of our primary source of power production in the first place, and the Administration’s new emissions restriction scheme wouldn’t even be a gleam in this or any other president’s eye.

But no worries.  What the EPA left out, we’ll fill in.


Using a simple, publically-available, climate model emulator called MAGICC that was in part developed through support of the EPA, we ran the numbers as to how much future temperature rise would be averted by a complete adoption and adherence to the EPA’s new carbon dioxide restrictions*.

The answer? Less than two one-hundredths of a degree Celsius by the year 2100.

We’re not even sure how to put such a small number into practical terms, because, basically, the number is so small as to be undetectable.

Which, no doubt, is why it’s not included in the EPA Fact Sheet.

It is not too small, however, that it shouldn’t play a huge role in every and all discussions of the new regulations.

* Details and Additional Information about our Calculation

We have used the Model for the Assessment of Greenhouse-gas Induced Climate Change (MAGICC)—a simple climate model emulator that was, in part, developed through support of the EPA—to examine the climate impact of proposed regulations.

MAGICC version 6 is available as an on-line tool.

We analyzed the climate impact of the new EPA regulations by modifying future emissions scenarios that have been established by the United Nation’s Intergovernmental Panel on Climate Change (IPCC), to reflect the new EPA proposed emissions targets.

Specifically, the three IPCC scenarios we examined were the Representative Concentration Pathways (RCPs) named RCP4.5, RCP 6.0 and RCP8.5.  RCP4.5 is a low-end emissions pathway, RCP6.0 is more middle of the road, and RCP8.5 is a high-end pathway.

The emissions prescriptions in the RCPs are not broken down on a country by country basis, but rather are defined for country groupings.  The U.S. is included in the OECD90 group.

To establish the U.S. emissions pathway within each RPC, we made the following assumptions:

Figure 1 shows the carbon dioxide emissions pathways of the original RCPs along with our determination within each of the contribution from U.S. electricity production.

The new EPA regulations apply to the lower three lines in Figure 1.

To examine the impact of the EPA proposal, we replace the emissions attributable to U.S. power plants in the original RCPs with targets defined in the new EPA regulations. We determined those targets to be (according to the EPA’s Regulatory Impacts Analysis accompanying the regulation), 0.4864 GtC in 2020 and 0.4653 GtC in 2030.  Thereafter, the U.S. power plant emissions were held constant at the 2030 levels until they fell below those levels in the original RCP prescriptions (specifically, that occurred in 2060 in RPC4.5, 2100 in RCP6.0, and sometime after 2150 in RCP8.5).

We then used MAGICC to calculate the rise in global temperature projected to occur between now and the year 2100 when with the original RCPs as well as with the RCPs modified to reflect the EPA proposed regulations (we used the MAGICC default value for the earth’s equilibrium climate sensitivity (3.0°C)).

The output from the six MAGICC runs is depicted as Figure 2. 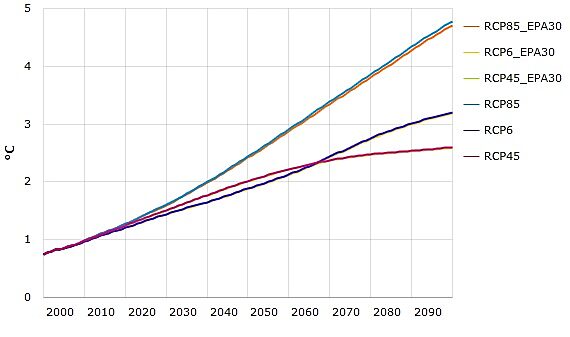 Figure 2. Global average surface temperature anomalies, 2000-2100, as projected by MAGICC run with the original RCPs as well as with the set of RCPs modified to reflect the EPA 30% emissions reductions from U.S power plants.

In case you can’t tell the impact by looking at Figure 2 (since the lines are basically on top of one another), we’ve summarized the numbers in Table 1.

In Table 2, we quantify the amount of projected temperature rise that is averted by the new EPA regulations.

The rise in projected future temperature rise that is averted by the proposed EPA restrictions of carbon dioxide emissions from existing power plants is less than 0.02°C between now and the end of the century assuming the IPCC’s middle-of-the-road future emissions scenario.

While the proposed EPA plan seeks only to reduce carbon dioxide emissions, in practice, the goal is to reduce the burning of coal. Reducing the burning of coal will have co-impacts such as reducing other climatically active trace gases and particulate matter (or its precursors). We did not model the effects of changes in these co-species as sensitivity tests using MAGICC indicate the collective changes in these co-emissions are quite small and largely cancel each other out.