Vice Chair Klobuchar, members of the Committee, thank you for this opportunity to testify about the debt limit. My name is Dan Mitchell. I’m a Senior Fellow at the Cato Institute. The views I express here today are my own.

I want to make five points.

First, it's important to understand that America's chief fiscal problem is an excessive burden of government spending. That's true today, and, as yesterday's long-run CBO fiscal outlook demonstrated, too much spending is our problem in the future.

Deficits and debt are undesirable, of course, but so are high taxes and printing money, which are the other two ways of financing government spending.

Simply stated, the true fiscal tax on our economy is how much government is spending. That's the problem. Deficits and debt, by contrast, are symptoms of that problem. Overall government spending is the measure of how much money is being diverted from the economy's productive sector. That's the primary problem. The various ways of financing that spending are secondary problems.

Second, the best way to gauge the success of fiscal policy is to see whether the burden of government spending is growing faster or slower than private economic output. If the private sector is growing faster than the government — which I consider to be the Golden Rule of Fiscal Policy — then lawmakers are doing a good job.

But if the converse is true and the burden of spending is rising faster than the private sector, then policy is heading in the wrong direction.

The data for any one year is important, but the real test is what happens over time. In other words, fiscal trendlines are critical.

But if the opposite occurs, and government grows faster than the private sector for an extended period, then it's just a matter of time before serious fiscal and economic problems occur. Nations such as Greece, for instance, got in trouble because the politicians did the opposite of the Golden Rule of Fiscal Policy.

Third, it's possible to make rapid progress with even a modest amount of spending restraint. Consider what's happened the past two years. For the first time in more than 50 years, we've enjoyed two consecutive years when overall government spending was lower than the previous year.

This has led to a big improvement in the key fiscal indicator, with the burden of federal government spending falling from 24.1 percent of GDP to 21.5 percent of economic output. And because there was progress on the real problem, the symptom of red ink got much better as well, with the deficit falling by more than 50 percent, from $1.3 trillion to $642 billion. 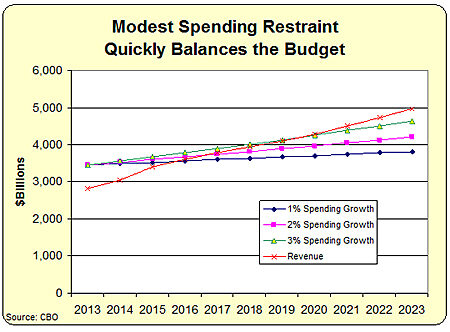 Indeed, it’s worth noting what Canada achieved in the 1990s. The burden of government spending had reached crisis levels by 1992, with government consuming more than 50 percent of economic output. But Canadian lawmakers — primarily during a time when the Liberal Party was in charge — put the brakes on spending.

For a period of five years, government outlays grew by an average of just 1 percent per year. That dramatically reduced the burden of government relative to the private sector. And by dealing with the underlying problem, Canada also went from having a large deficit of about 9 percent of GDP to a budget surplus.

Let’s now deal directly with the debt ceiling. My fourth point is that an increase in the debt ceiling is not needed to avert a default. Simply stated, the federal government is collecting far more in revenue than what’s needed to pay interest on that debt.

To put some numbers on the table, interest payments are about $230 billion per year while federal tax revenues are approaching $3 trillion per year. There’s no need to fret about a default.

But don’t believe me. Let’s look at the views of some folks that disagree with me on many fiscal issues, but nonetheless are not prone to false demagoguery.

Donald Marron, head of the Urban-Brookings Tax Policy Center and former Director of the Congressional Budget Office, explained what actually would happen in an article for CNN Money.

If we hit the debt limit… that does not mean that we will default on the public debt. …[The Treasury Secretary] would undoubtedly keep making payments on the public debt, rolling over the outstanding principal and paying interest. Interest payments are relatively small, averaging about $20 billion per month.

And here is the analysis of Stan Collender, one of Washington’s best‐​known commentators on budget issues.

There is so much misinformation and grossly misleading talk about what will happen if the federal debt ceiling isn’t increased…it’s worth taking a few steps back from the edge. …if a standoff on raising the debt ceiling lasts for a significant amount of time… a default wouldn’t be automatic because payments to existing bondholders could be made the priority while payments to others could be delayed for months.

Or what about the Economist magazine, which made this sage observation.

Even with no increase in the ceiling, the Treasury can easily service its existing debt; it is free to roll over maturing issues, and tax revenue covers monthly interest payments by a large multiple.

Let me add one caveat to all this analysis. I suppose it’s possible that a default might occur, but only if the Secretary of the Treasury deliberately chose not to pay interest in the debt. But that won’t happen. Not only because the Obama Administration wouldn’t want to needlessly roil financial markets, but also since research by Administration lawyers in the 1960s concluded that the Secretary of the Treasury might be personally liable in the event of a default. Mr. Lew has more than one reason to make sure the government pays interest on the debt.

My final point is that a fight on the debt limit might be worthwhile, even if it does cause considerable short‐​run angst and uncertainty. It all depends on whether it leads to desirable reforms.

Let’s look at the example of Greece. There’s nothing akin to a debt limit in that country, but imagine there was. Let’s further imagine that a group of lawmakers 15 years ago dug in their heels and refused to allow more red ink.

That probably would have caused a lot of turmoil at the time. But if the net result was to force Greek politicians to restrain spending for a multi‐​year period, then it’s quite likely that the people of Greece would have been spared the economic and fiscal misery that they’ve been suffering over the past few years.

Let’s close with an analogy. Yesterday’s long‐​run fiscal outlook from CBO shows that a do‐​nothing or status‐​quo approach guarantees fiscal chaos. We don’t know if a crisis will occur in fifteen years or twenty‐​five years. Or maybe we even have more than 25 years since the U.S. will benefit from capital flows when nations such as Japan and France implode.

But at some point the United States will suffer the same type of crisis that we’ve witnessed in other nations. We’re in a car and we’re heading toward a cliff, even though it’s hard to estimate how much father we can drive before we careen over the edge.

Wouldn’t it be a good idea to take steps today — when it’s relatively easy — to avoid that potential future crisis? To at least begin to steer away from the cliff? Perhaps by adopting something akin to Switzerland’s “debt brake,” which basically imposes an annual spending cap?

In other words, I’m not at all worried about short‐​run brinksmanship. Particularly since there’s no realistic possibility of default. But I am worried about the long‐​run trendline of government spending. And if some brinksmanship today means spending in the future won’t grow as fast, then the nation will be in a much stronger fiscal position.