Tort reform that limits medical malpractice (“med mal”) suits can affect healthcare spending in two distinct ways. Tort reform can directly lower health care spending by lowering the cost of med mal insurance, which covers indemnity payouts on claims plus defense costs. However, these direct costs account for only about 0.3 percent of healthcare spending. Thus, any decline in med mal premiums will have a minor impact on overall spending.

Tort reform can also affect healthcare spending indirectly, by changing providers’ incentives. In particular, if med mal risk falls, providers might engage in less “defensive medicine” — the practice of ordering tests and other procedures that do not benefit patients (or lack sufficient benefit to justify their costs), to reduce the risk of a med mal lawsuit. If tort reform leads to fewer lawsuits, it may also lead to less defensive medicine. Policymakers have long seen the elimination of defensive medicine as a source of major savings in healthcare costs (e.g., more than a hundred billion dollars).

However, on theoretical grounds, it is not clear whether tort reform will reduce healthcare spending. Providers may perform additional procedures and order additional tests for a number of reasons other than liability risk, including economic incentives to provide services; patient preferences for more healthcare (with costs paid largely or entirely by others); the desire to be thorough; conforming to local norms (Matlock et al., 2013); concerns about reputation (Sclar and Housman, 2003); and risk of professional discipline. If most physicians are inclined to “do more” for multiple reasons, tort reform could have only a modest impact on spending.

Indeed, tort reform might cause healthcare spending to rise. Some defensive practices involve “avoidance behavior” — doing less rather than more. Providers may avoid high‐​risk patients or refrain from performing risky procedures, due to fear of malpractice liability (Illinois State Medical Society and ISMIE Mutual Insurance Company, 2011). Tort reform could reduce these avoidance incentives. Also, if physicians have economic incentives to provide risky services, med mal risk could provide a counterweight against this “physician‐​induced demand.” These sources of higher spending could offset any savings from fewer defensive procedures (Currie and MacLeod, 2008).

Thus, the overall impact of med mal risk on healthcare spending is an empirical question. Several prior studies investigate this question in the Medicare population. A prominent early study by Kessler and McClellan (1996, 2002) finds that caps on non‐​economic or total damages (“damage caps”) lead to 4–5 percent lower in‐​hospital spending on cardiac patients covered by Medicare. Later studies also find negative point estimates for hospital spending (Medicare Part A), although their estimates are statistically insignificant (-2.3 percent for the Congressional Budget Office (CBO, 2006); and -3.7 percent for Sloan and Shadle, 2009). Only the CBO studies physician‐​directed spending (Medicare Part B); they find a statistically insignificant 1.6 percent decline. However, these studies all involve damage caps adopted during the second (e.g., mid‐​1980s) med mal reform wave — a period when Medicare’s hospital pricing rules were in their infancy.

We revisit the impact of tort reform and med mal risk on healthcare spending. We use several approaches. First, we study more recent damage caps in the nine states that adopted damage caps during the third med mal reform wave of the mid‐​2000s (2002–2005). We find that thirdwave damage caps do not significantly affect per enrollee Medicare Part A (hospital) spending, but lead to 4–5 percent higher Medicare Part B (physician‐​directed) spending. Total Medicare spending, a blend of Part A and Part B spending, rises by 1–3 percent (statistically insignificant in most specifications). 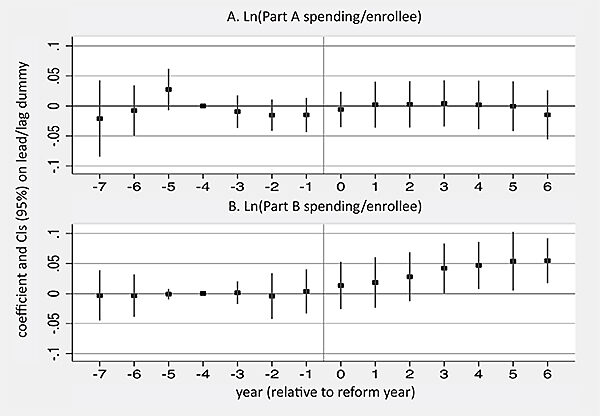 Decreases in claim rates predict significantly higher Part B spending and total Medicare spending. We find hints (but only hints) of higher Part A spending as well.

Thus, both approaches lead to results that are contrary to the conventional wisdom on defensive medicine. Lower med mal liability risk predicts higher Part B spending and does not predict lower Part A spending, Third, we reconsider the evidence on healthcare spending following cap adoptions in the 1980s. If we use control variables similar to those used by Kessler and McClellan (1996, 2002), we find a post‐​cap drop in Medicare spending, comparable in magnitude to theirs. But the estimated drop shrinks to near zero if we use additional controls and is not statistically significant.

Taking both the 1980s caps and more recent caps together, there is no evidence that adoption of damage caps reduces either Part A or Part B Medicare spending. There is, however, evidence that the 2000s caps lead to higher Part B spending.

We provide evidence that physicians “do more” for Medicare patients after adoption of damage caps, but we do not study what physicians do differently, or why. Our results suggest the need for further work, using more granular data, ideally at the patient level, to assess the specific changes in patterns of care that drive our results and to determine whether a similar pattern holds for non‐​Medicare patients.