A new Cato Institute/​YouGov survey of public attitudes toward the police finds a 38‐​point gap between white and black Americans’ perception that police are too quick to resort to deadly force.1 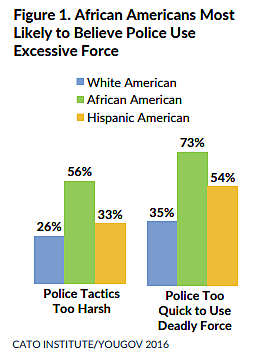 Nearly three-fourths (73%) of African Americans and 54% of Hispanics believe the police are “too quick to use deadly force,” compared to 35% of white Americans. Instead, 65% of white Americans believe police resort to lethal force “only when necessary” (see Figure 1). When it comes to police tactics overall, black Americans (56%) are more likely to think they are “too harsh” compared to white (26%) and Hispanic (33%) Americans. Majorities of whites (67%) and Hispanics (58%) believe police generally use the right amount of force for each situation.