The presidential primary contests of 2011-12 brought renewed attention to the idea of reinstituting a gold standard. The 2012 Republican Party platform ultimately included a plank calling for the creation of a commission to study the issue.

The favorable attention given to the idea of reinstituting a gold standard has attracted criticism of the idea from a variety of sources. Considered here are the most important arguments against the gold standard that have been made by economists and economic journalists in recent years.

A few recent arguments are novel to some extent, but not all add weight to the case against a gold standard. Several authors identify genuine historical problems that they blame on the gold standard when they should instead blame central banks for having contravened the gold standard.

Gold standards, being real‐​world human institutions, fall short of perfection. No doubt a well‐​trained academic economist can describe on the whiteboard an ideal monetary system that produces greater stability in the purchasing power of money than a gold standard does—or scores higher on whatever one criterion the economist favors—while sparing us a gold standard’s resource costs by employing fiat money. But other well‐​trained economists have proposed different criteria, and even a flawless central bank cannot pursue all criteria with one policy.

More important, fiat standards in practice have been far from perfect monetary systems. We need to examine historical evidence if we want to come to an informed judgment about whether actual gold‐​based systems or actual fiat based systems display the smaller set of flaws. I find that the most automatic and least managed kind of gold‐​based system—a gold standard with free banking—can be expected to outperform a gold standard with central banking and to outperform the kind of fiat monetary systems that currently prevail. 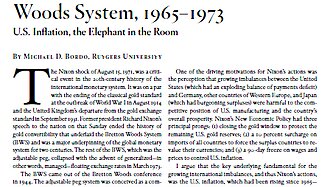