Many policymakers believe that an essential part of immigration reform is nationally mandating the use of E‐​Verify, the electronic employment eligibility verification system intended to prevent unlawful immigrants from working in the United States. A mandate requiring all employers to screen their new hires through federal government databases will likely be included in immigration reform measures contemplated by the 114th Congress. It is the latest in a decades‐​long effort to make “interior enforcement” of immigration law workable.

E‐​Verify is an intrusive labor‐​market regulation that places the onus of immigration law enforcement on American employers. E‐​Verify is expensive, and it has a startling degree of inaccuracy. It could exclude hundreds of thousands of Americans from employment—at least in the short run. E‐​Verify is also ineffective at preventing unauthorized immigrants from working in the United States, as the experience of Arizona with its E‐​Verify mandate shows. E‐​Verify does not lower wages for unauthorized immigrants enough to suppress unlawful immigration because the wage gap between the United States and other countries is too great. A national E‐​Verify mandate would not turn off the jobs magnet, but it would spur more unlawful immigrants to engage in identity theft and work under the table.

If E‐​Verify is mandated nationwide, worker and employer avoidance and noncompliance would cause supporters of interior enforcement of immigration law to seek harsher sanctions on businesses, more punitive measures for unauthorized workers, and a biometric identity system for all Americans—a step that must be avoided. E-Verify’s high costs and ineffectiveness at deterring unlawful immigration should disqualify it as a component of immigration reform. 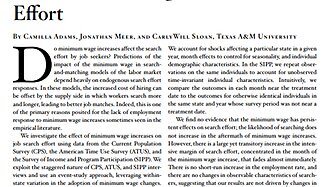 America’s Border Wars: What the Border Patrol Doesn’t Want You to Know