Robo‐​calls are a growing issue of public concern, and the Telephone Consumer Protection Act (TCPA) is the federal law that regulates and penalizes their use. The law makes businesses who violate the many consumer‐​oriented provisions liable to private lawsuit. This is no idle threat, either; in the last ten years 21 TCPA cases have settled for over $10 million. It is also a favorite of states’ attorneys general, who earn popularity for targeting the sources of unwanted calls.

The 1991 law was all‐​encompassing. Auto‐​dialers and pre‐​recorded calls were prohibited for political activists, local businesses, debt collectors, and charities alike. Unless a consumer has released their number willingly, they could not be called by such annoying methods. But in 2015, Congress passed a budget that contained an amendment exempting from the statute any calls made “solely to collect a debt owed to or guaranteed by the United States.”

That exemption engendered a constitutional challenge from the American Association of Political Consultants (AAPC), arguing that the law had become a content‐​based restriction that is presumptively invalid under the First Amendment. Content‐​based restrictions are those that ban speech based on the content of the communication. Calls to collect government debt are different from other types of calls because of what is said on the call. The Fourth Circuit agreed that the restriction was content based but oddly “fixed” that problem by striking down the debt‐​collection exemption, which means the statute now bans more speech than before.

The government petitioned the Supreme Court for review and the Court agreed to hear the case. Cato has filed an amicus brief in support of the AAPC. We argue that the exemption is a content‐​based restriction under any common‐​sense meaning of the term. Strict scrutiny is thus warranted partially because the exemption favors speech that benefits the government. 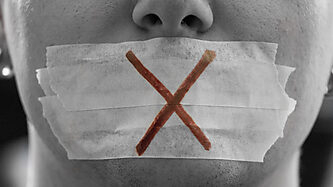 Poll: 62% of Americans Say They Have Political Views They’re Afraid to Share