A new ruling by the World Trade Organization in a dispute between two Middle Eastern states has added further refutation of the view of the Trump Administration that the WTO cannot second‐​guess sovereign states when they restrict trade for what they claim are reasons of national security.

In a case brought by Qatar against Saudi Arabia, a WTO panel has ruled that the Saudis cannot use national security as an excuse for failing to protect the intellectual property of Qatari rights holders from rampant piracy of their broadcast rights for sports, movies, and television programming. The ruling is one more example of the extensive reach of WTO obligations beyond such traditional trade topics as tariffs. And it is evidence anew of the limited reach of the exceptions to those obligations for professed purposes of national security.

In June 2017, Saudi Arabia cut diplomatic ties with Qatar because of Qatar’s alleged support and harboring of terrorists. Two months later, a shadowy company called “beoutQ,” described in the WTO panel report as the “NETFLIX of piracy,” began to engage in the wholesale theft of copyrights held by a Qatari company named “beIN” by illegally broadcasting everything from soccer matches to soap operas in Saudi Arabia. Exiled from the Saudi market, beIN and its numerous corporate allies in third countries were unable to assert their IP rights domestically in Saudi Arabia.

A new ruling by the World Trade Organization in a dispute between two Middle Eastern states has added further refutation of the view of the Trump Administration that the WTO cannot second‐​guess sovereign states when they restrict trade for what they claim are reasons of national security.

Qatar went to the WTO, where it accused Saudi Arabia of not fulfilling its treaty obligation to stop this commercial‐​scale copyright piracy.The WTO panel found no connection between upholding the asserted Saudi national security interest and the failure by the Saudis to apply criminal procedures and penalties to the pirate company, beoutQ. On this basis, the panel ruled in favor of Qatar. Given this ruling, Saudi Arabia should now shut down the pirates.

The ruling in this dispute follows and builds on a similar ruling by another WTO panel a year ago in a dispute between Russia and Ukraine over multiple restrictions imposed by Russia on the transit of Ukrainian goods through Russia. There, too, the United States, as a third party, maintained that, national security having been invoked, the WTO panel could not hear the case. In this instance, the Trump view is a longstanding U.S. view. The United States has long contended that the national security exception in WTO rules is self‐​judging and, when invoked, can neither be reviewed nor refused by WTO jurists.

The jurists in the Russian dispute disagreed. So too did those in the Saudi dispute. In sum, their reasoning goes: If the national security exception is self‐​judging, if it cannot be reviewed like any other obligation in the WTO treaty, then why do the national security exceptions in the WTO rules on trade in goods and services and on trade‐​related aspects of IP rights set out specific limited circumstances in which these exceptions can apply?

Notably, the panel in the Russian transit case– as mandated by the WTO treaty – drew on the “customary rules of interpretation of public international law” in noting that treaties must be upheld in “good faith” by those that are parties to them. On this basis, the panel in that case concluded that governmental actions for which a national security exception is claimed must “meet a minimum requirement of plausibility in relation to the proffered essential security interests.” So much then for President Trump’s implausible claims that imports of Canadian steel and European cars, among other imports, pose national security risks for the United States.

Under international law, technically, these two panel rulings apply only to the parties to these disputes and to the measures addressed in them. Practically, though, in the WTO, rulings are generally followed to fulfill the mutual desire expressed by the United States and 163 other countries in the WTO treaty for “security and predictability” in world trade.

One reason why President Trump and his trade enforcers have undermined the functioning of the WTO Appellate Body—the WTO court of final appeal—is their fear that the appellate judges would uphold panel rulings such as these. The Appellate Body is unable to hear new appeals because it has been reduced to just one of its full complement of seven judges by the refusal of the United States to join in a consensus to fill vacancies on the court. At least three judges are needed to hear an appeal.

Even so, the sound reasoning of these two panels makes it likely that when the national security defense is raised in other trade disputes, other WTO panels will follow these two rulings, just as the panel in the Saudi IP case did in following the panel in the Russian transit case. Making this still more likely is the fact that the chairs of the two panels are two of the most respected international jurists in the world – Georges Abi‐​Saab of Egypt, a former member of the Appellate Body, in the Russian case, and Donald McRae of Canada and New Zealand, in the Saudi case.

WTO rulings in disputes in which none of the disputing countries are from the West are often ignored in the politics and in the media of the West. These two rulings, though, are deserving of much global attention. They remove the foundations for the U.S. argument that it can do whatever it wishes in trade if it does so in the name of national security. And they foreshadow more such rulings to come. 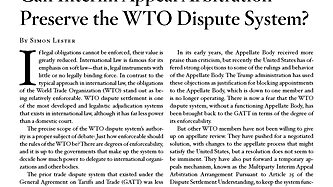 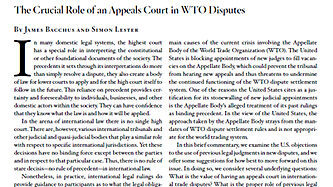 The Fate of the WTO and Global Trade Hangs on Fish

Dispute Settlement and the US-UK Trade Agreement: Lessons from the NAFTA Renegotiation