The United States Postal Service has lost over $20 billion since 2006 and is projected to lose another $8 billion this year. Government Mail is about to max out its $15 billion line of credit with the U.S. Treasury, and it faces $66 billion in unfunded obligations due to excessive labor costs. With more and more people using email, sending text messages and paying their bills online, the Postal Service’s long‐​term prospects are undeniably bleak.

Although USPS management has been able to cut costs, the savings haven’t been nearly enough to stem the rising tide of red ink. If the USPS were a private business, it might be able adapt to the rapidly changing economic landscape and evolve into a viable commercial entity. But it’s not a private business — it’s a branch of the federal government. As a result, the USPS has been hopelessly hamstrung by constant meddling from politicians, as exemplified by the difficulty the USPS faces when trying to close post offices.

Postal management announced this week that it will weigh the closure of 3,700 of its 32,000 post offices, hoping to save $200 million a year. Those savings are miniscule compared to the $8 billion alone that the USPS will lose this year, but it’s a start.

Unfortunately, there’s a very good chance that those members of Congress whose districts will be affected by a post office closure will raise a stink. In 2009, for example, the USPS looked at closing 3,200 post offices. Following a congressional outcry, the number under consideration was reduced to a mere 140. Two years later, only 80 have actually been closed.

The USPS is required to provide services to all communities, including areas where post offices have low traffic and are not cost‐​effective. Before closing a post office, the USPS must provide customers with at least 60 days of notice before the proposed closure date, and any person served by the post office may appeal its closure to the Postal Regulatory Commission. The USPS cannot close a post office “solely for operating at a deficit.” That’s a problem because four out of five post offices are operating at a loss.

Can anyone seriously imagine any other business not being able to close a store or factory for “solely operating at a deficit”? That would be a recipe for bankruptcy. While the USPS is structured like a business — revenues from the sale of postal products are supposed to cover costs and it receives virtually no federal appropriations — Congress prevents it from actually operating like a private business by inhibiting its ability to reduce costs, improve efficiency or innovate.

Postal management is attempting to head off the inevitable congressional interference by creating “Village Post Offices” in the communities affected by the closings. Local businesses, such as pharmacies and grocery stores, would be allowed to offer postal products and services. This makes sense because whereas post offices used to generate almost all postal retail revenue, 35 percent is now generated through alternative channels like USPS​.com, self‐​service kiosks and private stores.

Closing post offices is a small step towards cutting costs and “rationalizing” the retail network, which the USPS management recognizes as critical. However, that won’t be enough to overcome economic reality — let alone the control freaks in Congress. Ultimately, if the USPS is to continue operating like a business instead of becoming just another taxpayer‐​funded bureaucracy, Congress is going to have to hand the reins over to the private sector. That means privatizing the United States Postal Service.

To Save the USPS, We Must Privatize It 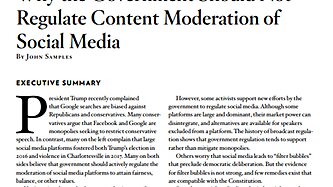