In 1996, at the start of the dot‐​com boom, the number of initial public offerings (IPOs) in the United States reached 677. This marked the peak of new share offerings on American exchanges. It seems particularly fitting that, at the end of that year, then‐​Federal Reserve chairman Alan Greenspan would warn of “irrational exuberance… unduly escalat[ing] asset values.”

To expect a return to the heady IPO days of the late 1990s may be unrealistic, perhaps even mistaken, given the recession that followed them. But since the turn of the millennium, and particularly in the wake of the 2008 crash, the pace of new share issues has slowed to a crawl. 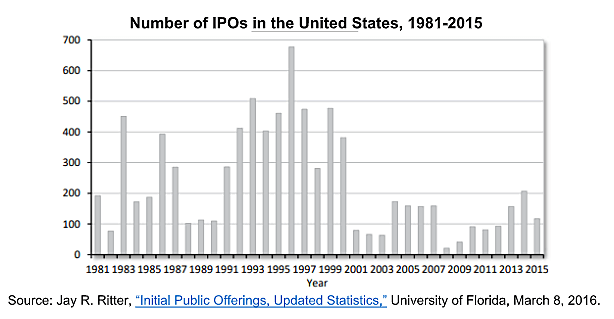 It is tempting to blame the slowdown on a post-recessionary hangover and a tepid recovery. Typically, periods of negative growth – especially those contemporaneous with bank failures and financial instability – are followed by some years of limited business creation and expansion. Furthermore, investors wary of recent losses might require rates of return beyond what listing firms can offer.

But there are reasons to doubt whether this story applies to our recent experience. Indeed, if anything, capital markets suffer from an embarrassment of riches. Investable funds are in plentiful supply. Global private pension assets amounted to $41.4 trillion in 2017. That's 2.3 times the size of the US economy. Chinese people and companies save 46 per cent of the country's GDP, even as the latter continues to grow at high rates. According to Credit Suisse, more than half of the world's $280 trillion aggregate wealth is in financial assets.

Higher barriers to entry into public markets not only raise the cost of capital for small firms, but they also foreclose investment opportunities for ordinary investors.

Bond yields, a measure of the return demanded by investors, remain relatively low, even if much is made of rates on US 10-year notes recently reaching 3 per cent. Price-earnings ratios on big American listed firms remain above 20, considered expensive by historical standards. The mood of investors, in other words, is closer to measured confidence than cautious retreat.

If the problem isn't capital supply, could it be that demand is absent? The rate of business "churn" – that is, the amount of annual entry and exit – has declined since the 1980s. To the extent that reflects a reduction in dynamism, it could have pushed down business demand for capital. 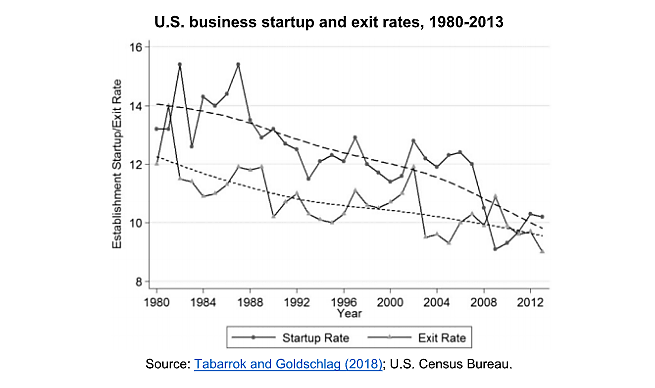 However, this narrative has some problems. Firm churn began its decline long before the advent of the IPO drought. Additionally, funds specialising in new and struggling firms have recently had some of their best years. In 2017, venture capital firms invested a record $148 billion. Private equity funds raised $453 billion.

Plainly, startup and growing firms are looking elsewhere than the public markets for capital. And who could blame them? Issuing shares to the public is expensive. Underwriters charge four to seven per cent of the value of the sale in fees. Together with other costs, an initial public offering (IPO) can set a firm back tens of millions of dollars. That's not even the end of it: remaining public costs the average firm $1.5 million, according to PWC.

Much of the cost of a public issue relates to regulatory burden. After the accounting scandals of the early 2000s, American legislators passed the Sarbanes-Oxley Act, which introduced new governance, accounting and disclosure requirements for public firms. Latterly, the Securities and Exchange Commission (SEC) has promulgated regulations aimed at increasing market efficiency and liquidity. But a side-effect of this rule-making activity has been to make trading in small-capitalisation firms less profitable.

Higher barriers to entry into public markets not only raise the cost of capital for small firms, but they also foreclose investment opportunities for ordinary investors. Venture capital and private equity funds typically have high net worth thresholds for their clients.

Furthermore, if one wishes to invest in non-public firms on her own account, regulators also place income and wealth requirements on investors. In the US, only those with an annual income in excess of $200,000, or $1,000,000 in assets, can buy in private offerings. Similar requirements are in place in the EU.

Declining yields and the dearth of public offerings have combined to push the market returns available to retail investors to historic lows. This will make it more difficult for ordinary people to save for retirement, home purchases and education. In the meantime, those already with financial means are able put their funds into promising new ventures. Well-known internet unicorns such as Airbnb and Uber remain private and thus largely restricted to "sophisticated" (read: wealthy) investors.

Nor is this problem strictly American. British and other European investors hold U.S.- listed stocks, so they should also be concerned about the dearth of new offerings. Moreover, a similar trend of declining IPOs has lately been apparent in the London market, too. Finally, because so many of the most transformative innovations are seeded in America, that capital to fund them is becoming costlier should concern us all.

Back in the 1980s, it was an explicit aim of policy to turn more people into shareholders. Bringing capital to the people was, in the eyes of many, what made capitalism popular. Today, however, regulation is restricting broadly dispersed asset ownership – and the long-term consequences may well be felt beyond households' retirement accounts.

Grace Blakeley’s Stolen Is a Tired Invective against Market Capitalism