Last week, the U.S. Supreme Court ruled that if you’re pulled over by the police for speeding or, say, not wearing your seatbelt, they may bring out drug‐​sniffing dogs to investigate your car without violating the Fourth Amendment.

On the Volokh Conspiracy website, Orin Kerr observes that Justice John Paul Stevens, writing for the majority, indicated that the Fourth Amendment protects not against violations of privacy or invasiveness, but against violation of property rights. Since one can’t have property rights for illicit drugs, a search can’t violate the Fourth Amendment.

It was a troubling precedent. It’s hard to see how any police search would violate any rights under Justice Stevens’ ruling, so long as the search turned up something illegal, which undermines what the Fourth Amendment is all about.

That case was the latest in a number of court rulings and pieces of legislation that have been chipping away at the criminal justice rights of substance‐​abuse suspects. Ours is quickly becoming a two‐​tiered criminal justice system — one in which there are one set of criminal protections for drug and alcohol defendants, and a broader set of protections for everyone else.

Last month in Virginia, pain physician Dr. William Hurwitz was convicted on dozens of counts of drug distribution. Prosecutors and the foreman of the jury that convicted him conceded that Hurwitz didn’t knowingly participate in a drug trade, but because the some of the pain medication he prescribed was sold on the black market, he was nevertheless found guilty. He faces life in prison. Proving intent — as is required to secure a conviction in nearly every other crime — apparently wasn’t necessary.

The drug war has been eating at the Bill of Rights since its inception. Asset forfeiture laws, for example, allow law enforcement to seize the assets of suspected drug dealers before they’re ever convicted of a crime. Even if the defendant is acquitted or the charges are dropped, the mere presence of an illicit substance in a car or home can mean the loss of the property, on the bizarre, legal principle that property can be guilty of a crime.

Thanks to mandatory minimum sentencing laws, a judge in Utah recently had no choice but to sentence a first‐​time marijuana dealer to 55 years in prison (he had a pistol strapped to his ankle during the one‐​time deal, though he never brandished it). Frustrated but hamstrung by drug laws, the judge in the case noted that just hours earlier, he had sentenced a convicted murderer to just 22 years for beating an elderly woman to death with a log. Courts have carved out a “drug war exemption” in the Bill of Rights for multiple search and seizure scenarios, privacy, wiretapping, opening your mail, highway profiling, and posse comitatus — the forbidden use of the U.S. military for domestic policing.

The other area where criminal protections are withering in the face of substance‐​abuse hysteria is in Driving Under the Influence or Driving While Intoxicated cases.

The most notable example is the 1990 case of Michigan vs. Sitz, where the Supreme Court ruled that the problem of drunk driving was so pervasive, the Court could allow “random sobriety checkpoints” in which cops stop motorists without probable cause and give them breath tests, a practice that would otherwise again violate the Fourth Amendment.

The Court has since ruled that the urgency of the drunken driving problem gives states the option to legislate away a motorist’s Sixth Amendment right to a jury trial and his Fifth Amendment right against self‐​incrimination. In 2002, the Supreme Court of Wisconsin ruled that police officers could forcibly extract blood from anyone suspected of drunk driving. Other courts have ruled that prosecutors aren’t obligated to provide defendants with blood or breath test samples for independent testing, even though both could be done relatively easily.

State legislatures have pounced on these rulings. The state of Washington just passed two laws remarkable in their disdain for everything our criminal justice system is supposed to represent. The first instructs juries in drunk driving cases to consider the evidence “in a light most favorable to the prosecution,” an evidentiary standard that’s unheard of anywhere else in criminal law. The second mandates that breath test evidence be admissible, no matter what — even if the defense can prove that the breath test machine was broken, or jiggered toward higher readings.

Last year, Pennsylvanian Keith Emerich had his license revoked by state authorities after he revealed to his doctor during an emergency room visit that he sometimes drinks a six‐​pack of beer per day. His doctor reported him. Emerich wasn’t accused or charged with drunk driving. In a bizarre twist on the principle of “presumption of innocence,” Emerich must now prove to the state that he doesn’t drive after drinking before he can get his license back.

More and more states are taking advantage of the Supreme Court’s granted exemption to a right to a jury trial for DUI-DWI suspects, particularly in states where judges are elected, not appointed. That, of course, is because elected judges deemed insufficiently harsh on such defendants can have their “leniency” used against them in a re‐​election campaign.

Though no such bill has yet been signed into law, several state legislatures have considered legislation that would mandate ignition interlock devices in every car sold in the state. New Mexico’s version of the law would require all drivers to blow into a tube before starting their car, then again every 10 minutes while driving. Drivers over the legal limit would not be able to start their cars or, if already on the road, given a window of time to pull over. Onboard computer systems would keep data on each test, which service centers would download once a month or so and send to law enforcement officials for evaluation.

The problem, as Thomas Jefferson famously said, is that the natural process of things is for liberty to yield and for government to gain ground. It would take a rare and brave politician to stand up and say that we need to roll back or reconsider our drug laws, or that it’s unfair to give accused murderers or rapists more rights than we give DWI defendants. But that’s exactly what needs to happen. 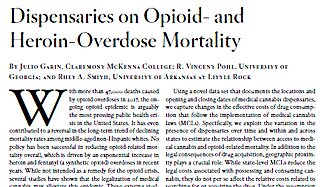