As Veteran’s Day approaches, the time has come to pay tribute to those who have given their lives to this country, though they were not born in this country. Immigrants have received the Medal of Honor in every war since the medal was first established. To receive it, a recipient must risk his life, the bravery of his act must be considered beyond the call of duty and distinguished from other acts, and at least two eyewitnesses must have observed the act and provide incontestable evidence that it occurred.

More than 20 percent (over 700) of the Congressional Medal of Honor recipients in U.S. wars have been immigrants. As the official guide to recipients notes, “Those who have received the Medal of Honor since it was established in 1861 as the nation’s highest decoration are as different as the melting pot population of our country.”

Vietnam: At the age of 29, Laszlo Rabel was the leader of Team Delta, 74th Infantry Detachment. Rabel, a staff sergeant, had immigrated to the United States from Budapest, Hungary, and entered the service in Minnesota. He was leading his men in reconnaissance when enemy movement was detected. His team started to leave the area when suddenly a grenade landed in the middle of the team. Without hesitation, Rabel threw himself on the grenade, covering it with his body and absorbing the explosion. He lost his life but saved those whom he had led on the field of battle.

Korea: Lieutenant John Koelsch, a London‐​born immigrant, flew a helicopter as part of a Navy helicopter rescue unit during the Korean War. He had entered the service in Los Angeles but on the evening of July 3, 1951, he found himself on the Korean peninsula with darkness fast approaching. Word came that the North Koreans had shot down a U.S. marine aviator and that the man was trapped deep in hostile territory amid mountainous terrain. John Koelsch volunteered to rescue him.

As he descended beneath the clouds to search for the aviator the enemy fired on him. After being hit, Koelsch kept going until he found the downed pilot, who had suffered serious burns. A burst of enemy fire struck the helicopter causing it to crash into the side of the mountain. Koelsch quickly helped his crew and the downed pilot out of the wreckage. He led the men out of the area, barely escaping the enemy troops. For nine days they were on the run until the North Koreans finally captured them. During questioning, John Koelsch refused to reveal information. He died at the hands of his interrogators.

World War II: Marcario Garcia, born in Mexico, was 24 years old when near Grosshau, Germany, he found his company pinned down by the heavy machine gun fire of Nazi troops and by an artillery and mortar barrage. Though wounded and in pain, he refused to be evacuated. Instead, he crawled forward, all alone, and lobbed hand grenades into the enemy’s emplacement. He singlehandedly assaulted the position and destroyed the gun.

A short time later when another German machine gun started firing, back toward the German position he went. Alone, he again stormed the enemy, destroyed the gun, killed three German soldiers and captured four prisoners, helping to save his company.

Valente saw another enemy nest close by that was pouring “deadly fire” on American soldiers. He and his fellow soldier assaulted that position as well, silencing that gun, too. They then jumped into a trench, killed two German soldiers and captured 16 others. Despite what the citation calls “conspicuous gallantry and intrepidity” and “utter disregard of his own personal danger,” Valente was not killed.

Michael Valente, born in Cassino, Italy, saved the lives of many American soldiers that day. Three years later, Congress passed the first national origins quotas under the theory that Italians and other southern Europeans were genetically inferior to native‐​born Americans and, therefore, should be kept out of the country.

Today some may still be concerned that immigrants do not share a commitment to defending America. These new concerns are as misplaced as the old. For as has always been the case, the evidence is that immigrants are as willing as natives to support the nation’s defense needs and, if necessary, to give their lives for their country. 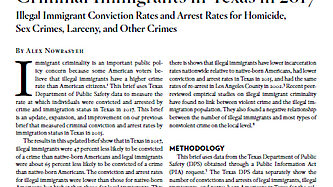 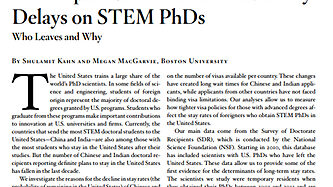 The Impact of Permanent Residency Delays on STEM PhDs: Who Leaves and Why