In a Fox News town hall last week, Donald Trump told Sean Hannity that he is softening on immigration and no longer favors the mass deportation of 11 million illegal immigrants currently residing in the country. “We will work with them,” he says.

If Trump can ‘soften’ on immigration and bring some of his core supporters with him, that could be a positive thing in his otherwise tumultuous legacy.

Trump explained: “Now everybody agrees we get the bad ones out. Now when I go through and I meet thousands and thousands of people on this subject…they’ve said ‘Mr. Trump, I love you, but to take a person that has been here for 15 or 20 years and throw them and the family out, it’s so tough, Mr. Trump.’” But he assured the audience “no citizenship” would be offered to unauthorized immigrants and “they’ll pay back taxes. They have to pay taxes.”

Trump’s reversal has come as a shock as he’s spent nearly his entire campaign as an immigration hardliner promising to build a “big wall” along the border with Mexico, calling immigrants “rapists” and “criminals,” and vowing to create a “deportation force” to remove every unauthorized immigrant in the country, even their citizen children. Furthermore, he had previously dubbed Jeb Bush and Marco Rubio’s similar immigration proposals as “weak.”

Why the pivot? Trump has been consistently trailing Clinton by 5-7 points over the past month, and his views of illegal immigrants are widely out of step with the median voter he needs to win over. For instance, consider a new Pew Research Center poll which finds majorities of Americans think that unauthorized immigrants fill jobs U.S. citizens don’t want (71%), are as hardworking and honest as Americans (76%), and are not prone to criminality (67%). Majorities also oppose building a wall (61%) and a PRRI/Brookings survey found that only 21% of Americans favor deportation of the undocumented. Instead, polls in recent years have consistently found about 70% support offering legal status to illegal immigrants and  about 60% support a pathway to citizenship. 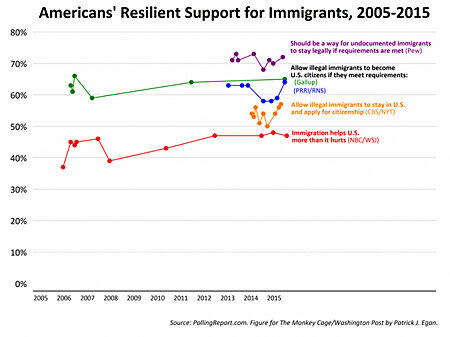 Trump's immigration pivots appears to be his campaign's attempt to attract voters Trump has struggled to secure—particularly college-educated voters and even many Republicans who feel his views are too extreme or indicative of prejudice rather than principle.

This is a total gamble. Why? Because statistical models based on public opinion polling data shows that immigration attitudes are by far the strongest driver of Trump's core support. Indeed, Trump supporters' immigration attitudes are far different from even fellow Republicans who did not vote for Trump in the primaries. Take for instance that a majority (52%) of Trump's supporters say illegal immigrants should not be allowed to stay in the country, while in sharp contrast 64% of non-Trump Republicans favor giving legal status. 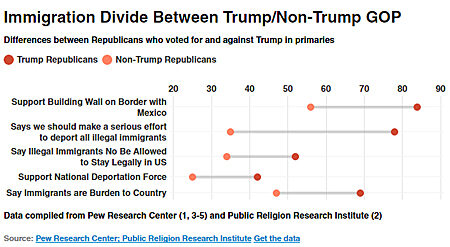 From his presidential announcement speech onward, Trump acknowledged and further validated the immigration concerns of millions of Americans. He said what Republicans in Washington either do not believe or won't say. Consequently, his supporters have been far more forgiving of his campaign missteps, routine insults, and aberrant policy positions. Thus, for Trump to undermine his core supporters' primary motivation risks depressing his base's turnout come November.

For instance, Ann Coulter, one of Trump’s strongest advocates, writes in her latest book (published the same day Trump first mentioned “softening”!) that the only unforgivable sin Trump could commit is to shift on immigration. And shift he did. The Washington Post reports that Sen. Jeff Sessions (R-Alabama) appeared shocked during a Trump rally in Austin—“Did he use the word ‘soften’?”— apparently struggling to interpret the implications.

Brilliant or Disaster for Trump?

But could this actually be a brilliant strategy for the Trump campaign? Digging deeper into the polling data, we find that Trump voters care far more about building a wall along the border of Mexico than about mass deportation of the undocumented. As one Trump supporter put it “He’s still going to build the wall—that’s the most important thing.” Fully 84% of Trump supporters favor building the wall, compared to 52% who say all illegal immigrants must be required to leave the country. So long as he remains committed to his border wall idea his supporters may give him flexibility.

Thus in theory, Trump could soften on immigration and still hang onto his core base of support and perhaps pick up more suburban college-educated voters, who have balked at his harsh immigration platform.

Nevertheless, it’s hard to imagine any degree of Trump “softening” on immigration at this point will have any meaningful impact among Hispanic voters. After Trump called Mexican immigrants criminals and rapists, seemed unconcerned if his mass deportation plan would deport some U.S. citizen children who are Hispanic, and deemed a judge incapable of adjudicating his Trump University case objectively because of his Mexican heritage, it’s no surprise that an overwhelming majority of Hispanics find Trump unacceptable.

In match-ups with Clinton, Trump garners 20% to Clinton’s 66%. Trumps’ favorability ratings are dismally low and on the decline. For instance, back in 2011 a third of Hispanics had a favorable view of Trump, by May 2016 this had slid to 23% and by August Trump’s favorables slid to a dismally low 15%. This is half the favorability rating (31%) Romney garnered at this point in the race in 2012.

Despite the chaos and damage caused by Donald Trump’s campaign, he may be able to help steer immigration hardliners toward accepting pragmatic reforms.

Political science research suggests that people are often willing to change their policy positions to align with political leaders they like and trust. Trump has become that trusted figure for many Americans who previously felt unheard on the issue of immigration.

For instance, at the Hannity town hall, Trump was very respectful of the people in the audience who favor mass deportation. He said to one such individual: “I love this guy. That’s my guy. I mean, I get it.  I get it. And I understand what you’re saying. ” He didn’t call him a racist, nativist, xenophobe, or some other nefarious label. He respected him instead. Perhaps not maligning a person’s character and showing them respect might make them more willing to consider new information and even change their minds.

If Trump can “soften” on immigration and bring some of his core supporters along with him, that could be one positive piece of his otherwise tumultuous legacy.