The good news is that there are more countries managing their economies in a fiscally responsible way than there were two years ago. Fiscally responsible means keeping average annual deficits less than average annual economic-growth rates, keeping net debt from exceeding one-third of gross domestic product, and maintaining a relatively small government. The bad news is that most of the world’s biggest economies, including that of the United States, are getting deeper and deeper in debt as a result of excessive spending, and will ultimately have to pay the price.

The accompanying chart gives the details. I included only countries that have a middle income or above, which I define as a $20,000 per-capita income on a purchasing power parity basis (to adjust for cost of living differences) as defined by the World Bank. I left out countries that are rich owing to oil, such as Saudi Arabia and Norway, and the very small economies. China, Turkey, Colombia, Mexico, Peru and the Philippines are also in very good fiscal shape, but have per-capita incomes of less than $20,000 per year.

Switzerland wins the award for having the overall best-managed and well-balanced economy, despite the fact that government spending is higher than the optimum. Switzerland has had prudent and responsible economic policies for decades, resulting in a higher per-capita income than that of the United States, despite pressures from its spendthrift neighbors and America to adopt less-responsible policies. Only slightly hobbled by having four official languages, it has maintained a very free and civil society. It ranks No. 4 on the Economic Freedom of the World Index, No. 5 on the International Property Rights Index, and has just kept its title as “the world’s most competitive economy for the fifth year running,” according to the World Economic Forum.

No. 2 is Chile, which now has the highest per-capita income in Latin America, after more than three decades of pro-growth, small-government policies. It has no debt and is running a surplus. The danger is that left-leaning politicians and media are pushing for bigger government, forgetting its disastrous socialist experiment 40 years ago. Hong Kong ranks No. 3 despite its small government and high income resulting from its rule by China, thus making the rule of law and property rights potentially less secure. Australia, South Korea and New Zealand continue to be prosperous and well managed, even though Australia and New Zealand have allowed government to grow well beyond optimal size. 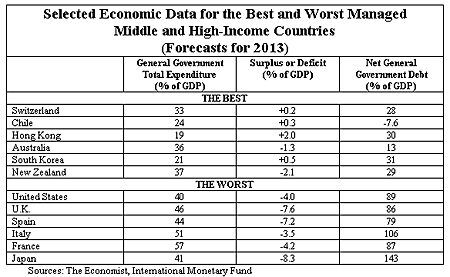 The major countries that are in the worst fiscal shape are the United States, the United Kingdom, Spain,Italy, France and Japan. All of these countries suffer from too much government, excessive taxation and regulation, and economic growth rates far below their annual deficits. A number of other middle- and high-income countries are also in very poor fiscal shape, but are not listed because of the relatively small size of their economies. They include Greece, Hungary, Ireland and Portugal.

The United States has been running unsustainable deficits for six years. Despite some recent improvements, the situation is expected to get worse as medical entitlements grow far faster than real economic growth. The Obama administration continues to be resistant to all serious attempts at entitlement reform. The United Kingdom is in a similar position, but the “Conservative” government has yet to enact the necessary spending reductions. Spain and Italy have made progress in spending-rate reduction, but they still need to do much more if they are going to avoid a Greek-style crisis. France is probably in far worse shape than it appears, given that its socialist government continues to promote anti-growth policies and its real debt burden is understated. The next big financial crisis is likely to originate in France. Japan has the worst debt situation of any major country, but fortunately for the rest of the world, most of its debt is owed to itself. Despite the current government’s attempt to spur growth in Japan, it is likely to fail because it is still resisting the necessary downsizing of government.

All of the large-debt countries illustrate the curse of democracy, in that a very high portion of their electorates receive more benefits from governments than they pay for, so they vote for politicians who promise even more, though the cookie jar is empty. The result will be increasing economic stagnation and likely political instability.

The additional tragedy for the world is that the big, poorly managed countries, rather than reforming their own economies, are putting pressure on the well-managed countries to raise taxes and increase harmful spending and regulations. The Obama administration has been very aggressive in trying to extend the very destructive U.S. tax laws to the rest of the world. The Obama “Justice” Department has gone so far as to harass and threaten Swiss financial institutions and others because they do not enforce U.S. tax law in Switzerland (even against those that do not operate in the United States and have not violated Swiss law). A wiser U.S. government would be trying to emulate the responsible Swiss policies and those of other smaller-government, low-debt countries, rather than trying to bully and punish the successful.