A meme making the rounds this week aimed at teachers and those concerned with classroom issues reads:

That’s one way to look at it. Alternatively, you could teach your kids about how law works, so that they would understand that the arguments made before the Supreme Court on Tuesday had nothing to do with anyone’s humanity being up for debate. In fact, the three cases at issue—Bostock v. Clayton County, Altitude Express v. Zarda, and Harris Funeral Homes v. EEOC—raise a number of issues of statutory interpretation, none of which call anyone’s humanity into question.

The question raised by these cases is whether existing federal civil rights law, when it bans any discrimination against an employee “because of … sex,” thereby banned private employment discrimination on the basis of sexual orientation and gender identity.

No one seriously argues that 1964 legislators intended to do either of those things. But under the principles of statutory interpretation that have proved ascendant with today’s Court, the most important element in determining what a statute means is the text within its four corners, not its intent or legislative history.

This is important because you can construct an ambitious—but not frivolous—argument that even if inadvertently, the “because of … sex” language sweeps broadly enough to reach situations its drafters never anticipated.

Memes that imply that, though couched in terms of concern for young people who are different from their peers, don’t really help if they instill in their subjects needless fear, unhappiness, and the belief that the world is out to get them.

The argument is this: If an employer would never fire Ginger for taking a romantic interest in men, but does fire George when it learns that he does so, it has treated him differently because of his sex. Similar arguments can reach the case of an employee’s gender identity.

You might call the phenomenon “surprise plain meaning”—a meaning of the text that the drafters did not intend or notice at the time. Every law student learns about this early on, as with the question of whether a “No Vehicles in the Park” rule covers bicycles, skateboards, or a statue of the general in his Jeep.

Of the five conservative Justices, Neil Gorsuch showed himself the most hospitable toward the plaintiffs’ case on Tuesday, and no wonder: as the most committed textualist, he’s the likeliest to see surprise plain meaning as beating legislative history. Gorsuch is also on the whole less likely than John Roberts and Brett Kavanaugh to be swayed by precedent, a factor that cuts in favor of the conservative side here: courts in early cases rejected the broad reading, even if some in more recent years have allowed it headway.

As justices know, this would not be the first branch of employment discrimination law to develop through surprise plain meaning readings. Bans on sexual harassment and sexual stereotyping, for example, were likely neither foreseen nor intended by the drafters of Title VII. But in time they came to be firmly enough established that Antonin Scalia himself wrote an opinion finding the law to cover sexually‐​oriented hazing of a male employee by heterosexual male co‐​workers.

About half the states—as well as many cities and counties—already ban sexual orientation discrimination, and most of these states also ban gender identity discrimination. The plaintiffs say this dispels a parade of horribles since the laws haven’t occasioned a high volume of litigation, or even much social upheaval. Conservatives counter that when such laws are adopted through legislation, critics are often able to obtain concessions, exemptions, and compromises. Not so if the courts reach the destination simply by reinterpreting current law.

And the liberal justices seemed to join in conservative worries about how to implement a broad reading. Both Ruth Ginsburg and Sonia Sotomayor seemed genuinely concerned that the law could mandate unisex bathrooms. Attorneys Pamela Karlan and David Cole responded that that would depend on the course of future litigation over, for example, what counts as significant, as opposed to de minimis, injury to a complainant.

All of the justices seemed to agree to steer clear of the now‐​notorious concurrence by Seventh Circuit Judge Richard Posner in Hively v. Ivy Tech, in which he not only approved of an expanded reading of the law, but applauded judges’ prerogative to frankly update old laws to reflect more modern thinking. This resulted in perhaps the funniest line of the Bostock transcript (p. 22):

MS. KARLAN: Well, the fact that a loose cannon like Judge Posner says, “do whatever you feel like” is not what we’re asking for.

But whichever way the Court rules, no one’s humanity hangs in the balance. Memes like the one pictured at top, though couched in terms of concern for young people who are different from their peers, don’t really help if they instill in their subjects needless fear, unhappiness, and the belief that the world is out to get them.

Nor—lest you think I’m picking on the one meme—does it help for the website Bustle to advise readers to “create an action plan” for “self‐​care” against “the strain, anxiety, and agony of being told that who you are makes you unqualified to support yourself and your family.”

Because no one at the Supreme Court this week was telling anyone anything of the sort.

Crisis at the Supreme Court 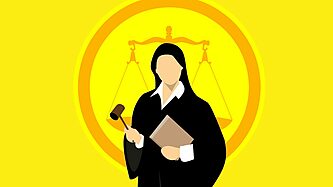 Just Accept It: The Supreme Court Has Always Been Political