Super Typhoon Haiyan left a path of tremendous devastation as it traversed the Philippines. Virtually all Category 5 hurricanes that make landfall do the same, with the number of casualties modulated by poverty, preparation, and preparedness (which are two different concepts).

While they are not infrequent over the open ocean, Category 5 storms don’t hit land very often. There’s some evidence that hurricanes of this intensity are unstable, and the eyewall structure required to maintain such winds often undergoes a natural change that reduces them to Category 4, or even three.

The best defense against Category 5 storms is resilient infrastructure and preparedness—characteristics surely better achieved through a free‐​market, than global governance.

But some of them do devastate a coastline before this occurs. That includes the current record‐​holding storm for (estimated) maximum wind, 1969 Hurricane Camille, which one of us (Michaels) rode out in an oceanfront laboratory not far from the eastern eyewall. Haiyan may well beat Camille’s records, but we won’t know until damage surveys are completed.

If Category 5 landfalls were more common we’d probably be more cautions as to how and where (and if) we decided to construct coastal communities. It’s a fact that buldings can be hardened to withstand some pretty severe winds. Hong Kong is going to get a Category 5 one day, and the high‐​rise building codes there are extremely stringent. It’s a matter of cost and benefit, like so many other things.

Nowadays, in the aftermath of every weather‐​related disaster, proponents of restricting fossil fuel use in the name of halting climate change are quick to place the blame for the tragedy on human‐​caused climate change (i.e., industrialized nations like the U.S.). The calls to “do something” amplify.

This is happening right now in Warsaw, at the latest (19th) in a long string of U.N.-organized Climate Change Conferences aimed at getting countries to agree to some sort of action aimed at mitigating climate change.

On the conference’s opening day, an envoy form the Philippines, Yeb Sano, gave an emotional address to the delegates in which he vowed to stop eating until something was accomplished.

“I will now commence a voluntary fasting for the climate. This means I will voluntarily refrain from eating food during this (conference) until a meaningful outcome is in sight.”

“We can fix this. We can stop this madness. Right now, right here.”

Sano got a tear-filled standing ovation.

In other words, limitations, even strict ones, on anthropogenic emissions of carbon dioxide and other greenhouse gases—the very thing that Sano seeks—will have no detectable (at least based on our current scientific understanding) impact on the characteristics of future tropical cyclones, such as Haiyan, or Sandy, or Katrina, or any other infamous storm. And as for sea level rise, projections are far more lurid than observations.

The hard numbers (from Ryan Maue’s excellent compilation) show that global tropical cyclone activity for the last 40+ years—during the time of decent observations and the time with the greatest potential human impact from greenhouse gas emissions—while showing decadal ups and downs, show little overall change. In fact, global cyclone activity has been below average for the past 5 years. 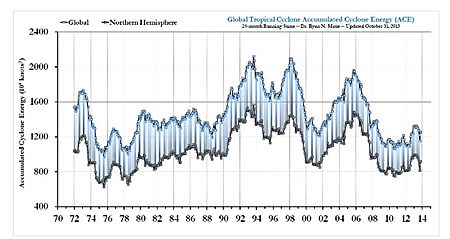 Figure 1. Global cyclone activity as measured by the ACE ACE -2.14% (accumulated cyclone energy) index since 1972 (top). The Northern hemisphere ACE index is denoted by the lower (black) points, and the Southern Hemisphere ACE is the area in between the two curves (from Ryan Maue).

The science on tropical cyclones is complicated and ultimately unclear in terms of the influence of greenhouse gas emissions, but is quite clear when it comes to the influence of demographics and wealth vs. climate change—the former grossly dominates the latter when it comes to future tropical cyclone disasters. So, no matter what this year’s U.N. climate confab does (forecast: nothing significant), it will not result in any meaningful changes to damages from future tropical cyclones.

Category 5 storms like Haiyan, Andrew, and Camille will always pose a threat to coastal communities (and beyond) in tropical cyclone-prone areas of the globe. The best defense against them is resilient infrastructure and preparedness—characteristics surely better achieved through a free-market, than global governance. But no matter what actions are taken, more Category 5 monster storms are coming. When they arrive, the news ought to focus on where they hit, not that they hit.

On North Korea, a Return to Fire and Fury Isn’t Worth the Risks