As an eighth‐​generation Scottish‐​American, I’m disappointed that my ancestral homeland has chosen not to be a nation once again. But that’s the decision of today’s Scots, and no doubt they have a better sense of what’s best for Scotland than I do. I’m struck by all the news reports calling the 55 percent vote against independence “decisive” or even “overwhelming.” If I were the leaders of the United Kingdom, I don’t think I’d feel that I’d won a decisive victory when 45 percent of the people of Scotland voted after much discussion to leave the UK. But a vote’s a vote, and that will end the demand for independence — though not for devolution — for the foreseeable future.

I want to take a moment to note something that has not been much remarked on, though it is in fact remarkable. The leaders of the United Kingdom allowed this referendum to take place, allowed the Scots to peacefully decide their own fate. Just think how remarkable that is. We Americans weren’t allowed to peacefully leave the United Kingdom. India went through years of violence before gaining its independence.

I offer a tip of the hat today to the Parliament and the governments of the United Kingdom.

In fact, peaceful separations are notable for their rarity. Perhaps the most often cited is the Velvet Divorce of the Czech Republic and Slovakia in 1992. Leaders of the two regions of Czechoslovakia couldn’t agree on the nature of their post‐​communist federation, so they agreed to separate. Under the leadership of Czech prime minister Vaclav Klaus and Slovak prime minister Vladimir Meciar (and over the opposition of Czechoslovak president Vaclav Klaus), a peaceful separation promptly took place.

In the United States, of course, an attempt by 13 Southern states to secede in 1860 led to four years of bloody civil war, which ended in the continuation of the union.

A few secession efforts in the United States also demonstrate the remarkable nature of the Scottish independence referendum. The San Fernando Valley region wanted to secede from the city of Los Angeles in the 1970s, and eventually a vote on secession was held in 2002. But the entire city of Los Angeles got to vote on whether the Valley could leave, and the effort was defeated. Today there are counties in both California and Colorado that have discussed secession, but in both cases the state law says that the legislature would have to approve. Few central governments look kindly on the loss of any portion of their taxpayers.

And that’s why I offer a tip of the hat today to the Parliament and the governments of the United Kingdom. They allowed the people of Scotland to decide their own fate. They did not insist that any secession had to get the approval of the government from which the dissident region wanted to secede. They did campaign hard to persuade Scottish voters to stick with the UK. But they let the Scots decide. May the road rise up to meet them, and may the sun shine warm upon their faces. And may other central governments learn from their example. 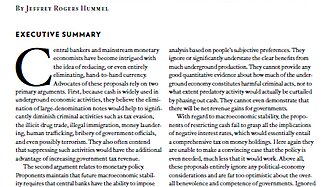 ‘Academics’ Devotion to the Socialist Dream Looks More Like Self‐​Interest