Ross Douthat and Reihan Salam’s recent New York Times article laying out a policy response to Trumpism argues, in part, that their preferred immigration policy will help the GOP avoid the likes of a demagogic megalomaniac such as Donald Trump. Unfortunately their policy ideas address neither the symptoms nor the causes, real or imagined, of Trump’s rise.

Wider public opinion does not justify the GOP adopting an anti‐​immigrant platform or candidate. Gallup has been tracking Americans’ immigration opinions for decades. Currently, 25 percent of Americans want increased immigration, a four‐​fold increase from the nativist high‐​water mark in 1993. Those who are happy with the present level of immigration since 1993 are now up 13 percent to 40, or about equal with the percent of people saying this in 1965 when Gallup started tracking. Meanwhile, the percentage of people who want less immigration, Trump’s position, dropped from 65 percent to 34 since 1993.

That 34 percent is increasingly concentrated within the Republican Party, according to Pew polls. Consistent with that partisan divide, a recent NBC News/​Wall Street Journal poll found that 56 of American voters agree immigration helps more than it hurts, but only 35 percent of Republicans agree with that statement. A June FiveThirtyEight and SurveyMonkey poll found that agreement with the statement the “number of immigrants who come to the United States each year” should “decrease” is one of the best ways to identify a Republican voter.

An anti‐​immigration position may help a candidate win a GOP primary, but it is a hindrance once he faces the rest of the electorate.

An anti‐​immigration position may help a candidate win a GOP primary, but it is a hindrance once he faces the rest of the electorate. Public support for immigration hasn’t surged due to rapid wage growth or an improving economic environment. Shockingly, economic concerns do not drive nativism or even much affect it.

It’s Not About Personal Pocketbooks, But the Economy

Douthat and Salam assumed economic concerns are driving Trump’s popularity. They incorrectly interpreted a recent review of academic work on what drives opinions about immigration, writing that “immigration skepticism seems to be rooted as much in concerns about how quickly immigrants assimilate, whether they rely on welfare programs and whether they compete for American jobs as it is in racial or cultural anxiety.”

This is what the literature review they reference actually says about economic and labor market anxiety driving nativism: “Conclusion 1. As an explanation of mass attitudes toward immigration, the labor market competition hypothesis has repeatedly failed to find empirical support, making it something of a zombie theory.”

Elsewhere in the survey the authors write, “[t]he accumulated evidence weighs strongly against the idea that self‐​interested concerns about labor market competition are a powerful driver of mass attitudes toward immigration … the significant majority of prior work finds that labor market competition does not shape attitudes of the mass public.” We can shed the myth that Trump’s nativism is popular among GOP voters because they are worried about immigrants taking their jobs.

Lower‐​Skill Immigrants Are Beneficial, Too

Immigrants of all skill levels have both a supply and demand effect on the economy as a whole and on the labor market specifically. On the supply side, immigration increases the number of workers. In a very simple model this would decrease wages, but immigrants and natives tend to work in very different occupations, meaning there isn’t much competition between the two groups. In other words, an increase in the supply of farm workers will not lower the wages for accountants.

The estimated negative wage impacts of lower‐​skilled immigrants are very small when they are even discovered. George Borjas’ famous work discovered small relative wage declines from immigration that are concentrated among lower‐​skilled Americans. According to a recent update of that paper which copies his methods but adds another ten years of analysis, the negative effect statistically disappears. At worst, the roughly 10 percent of Americans with only less than a high school degree actually compete against immigrants, but there are reasons to doubt that finding.

Other research finds complementary effects whereby lower‐​skilled Americans actually experience wage increases due to immigration. In such cases, more immigrant workers create job opportunities for lower‐​skilled Americans, pushing them up the wage ladder. Crucial here is noticing that occupations can face falling wages as a result of immigration but American workers change their behavior and shift into higher‐​paying occupations as a result.

Americans shifting into different occupations have produced a division of labor whereby lower‐​skilled immigrants compete for manual labor occupations while similarly skilled natives concentrate on the one area of low‐​skilled jobs where they have an advantage: communicating with customers and managers in English. Communications jobs pay more than those focused on manual labor.

There are also very few instances where immigrants displace natives from the labor market. The most common estimate in the academic literature is that for every 10 percent increase in the foreigner share of the population of a country, native employment rates fall by a minuscule 0.2 to 0.7 percent. Countries with relatively liberal labor markets, like the United States, face the smallest effects. In fact, an increase in lower‐​skilled migration can induce skilled natives to reenter the workforce. If immigration restrictionism improves wage growth, Japan certainly missed the memo.

None of These Concerns Hold Water

On the demand side, immigrants of every skill level buy goods and services. According to a recent working paper, each additional immigrant creates 1.2 local jobs mostly for native workers. Remarkably, 62 percent of these new local jobs are in non‐​tradable services, thus raising the wages for lower‐​skilled natives. That is why lower‐​skilled natives and lower‐​skilled immigrants frequently move to the same booming cities. By increasing both the supply and demand sides of the economy, immigration is a big win for Americans.

If younger lower‐​skilled American men are more interested in playing video games in their parent’s home than in working, kicking out a few hard‐​working immigrants, stopping their future flow, and possibly raising wages by a few percent won’t make a difference. All we’d be doing is replacing good, willing workers with nobody.

Worse than skirting the economic evidence in favor of liberalized immigration, Douthat and Salam’s support for skilled immigration will fall on deaf ears. Trump has read his supporters well and crafted his white paper and public statements to oppose skilled immigration, proposing reforms that would kill the H-1B program and opposing the type of reform Douthat and Salam might support with this statement: “Mark Zuckerberg’s personal Senator, Marco Rubio, has a bill to triple H‐​1Bs that would decimate women and minorities.”

Perhaps Douthat and Salam are concerned about the problems with the H-1B program—and there are many—so they defend Trump’s opposition to H-1B expansion. Trump also supports “a pause” in handing out green cards to foreign workers. Virtually all employment‐​based green cards that go to workers go to the high‐​skilled workers that they want to see liberalized.

Douthat and Salam will argue their specific immigration proposals would have prevented these people from flocking to support Trump. However, the anti‐​immigration views increasingly common among the GOP provide little salve for their faith. Candidates have touted views similar to Douthat and Salam’s, and they got outvoted by Trump’s more extreme anti‐​immigrant position.

As Salam recently wrote in the Dallas Morning News, “I’m not sure if you’re aware of this, but one of the biggest reasons Trump won the GOP presidential nomination is that he pledged to strengthen America’s borders, oppose amnesty and reduce immigration levels.” A nuanced position in favor of expanding some legal immigration but restricting other types might appeal to moderate voters, but they did not turn the GOP into a nativist fever‐​swamp of economic ignorance.

That brings us back to the original problem: How to have a GOP immigration policy that appeals to an increasingly nativist base and an increasingly pro‐​immigration public, and is economically coherent. Douthat and Salam chose a policy that is none of those. I’m not convinced that anybody really understands populism or the Trump phenomenon, but they seem particularly off.

Trump represents, in part, a rebellion against political elites like Salam, Douthat, and myself who use every political change to state loudly and confidently that this confirms their long‐​held opinions. The first part of preventing populist‐​inspired rebellions is to actually listen to voters instead of pretending your preferred policies are really what they wanted all along despite all of the evidence. Little is more condescending than that. Trump’s supporters will not be assuaged by the immigration position Douthat and Salam proposed, any more than they’d be convinced by mine.

Douthat and Salam also assume Trump’s candidacy is an entirely demand‐​driven phenomenon, that there is some uprising of support from a long‐​ignored constituency craving nationalism and protectionist economic policies who are attracted to Trump and fueled his rise. That ignores the other plausible supply‐​side theory for Trump: that he is a brilliant political entrepreneur who largely created the market in which he is competing. Rick Santorum, Scott Walker, and Mike Huckabee all had similar anti‐​immigration policy positions, yet they made it nowhere. Trump had one advantage: he acts like a demagogue, while those others didn’t, and populists love a demagogue.

While there is always a latent nativism, protectionism, and nationalism lurking in the populist corners of the American electorate, it needed a demagogue to activate it, and Trump was the right candidate. Without those notions lurking, Trump would not have succeeded; but without Trump or a character like him (someone like Ross Perot or George Wallace) those ideas wouldn’t be talked about, either.

Elite condescension is another reason Trump rose so fast among Republican primary voters. The piece by Douthat and Salam is a prime example of that condescending attitude. Condescension reeks most when elites argue that every political development supports their long‐​held preferred policy positions. Cherry‐​picked data that ignore the vast majority of economic evidence, patriotic correctness, and the same case for Salam’s preferred immigration policies that he’s promoted for years don’t make the GOP Trump-proof—they provide an example of why Trump succeeded.

Douthat and Salam misstate the degree of public enthusiasm for their own immigration reform ideas and are too willing to concede the factual “high ground” to people who believe lower‐​skilled immigrants are a net economic drain. Worse, their policy proposals will not appeal to the nativist wing of the GOP, will be ignored by the small sliver of establishment types who were able to keep their 2016 platform less extreme than it could have been, and will thus do nothing to prevent a future Trump. 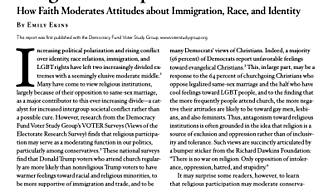 Trump’s Wall Will Not Stop Terrorism