The country just “celebrated” the five‐​year anniversary of the so‐​called American Recovery and Reinvestment Act, more commonly referred to as the “stimulus.” The White House wants us to think the legislation was a success, publishing a report that claims the stimulus “saved or created about 6 million job‐​years” and “raised the level of GDP by between 2 and 3 percent from late 2009 through mid‐​2011.”

These seem to be preposterous claims. According to data from the Minneapolis Federal Reserve’s interactive website, the current recovery (red line) is the weakest expansion since World War II. And keep in mind that this anemic recovery started in the summer of 2009, right about the same time as the stimulus was beginning. So if the President’s plan was effective, it should be apparent in the growth numbers. 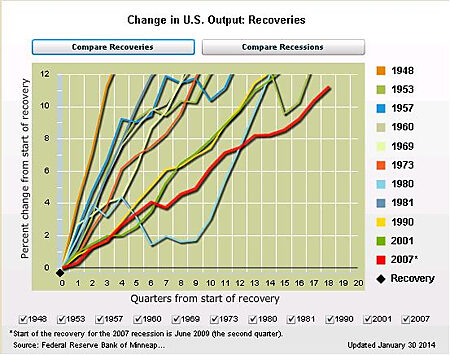 And the second chart shows that the labor market numbers are equally dismal. We’re stumbling through the second-worst recovery for job creation in the post-WWII era based on Minneapolis Fed data. The red line shows changes in total employment since the summer of 2009 and the results are lackluster at best. If this is a sign of a successful stimulus, it takes a vivid imagination to see what failure looks like. 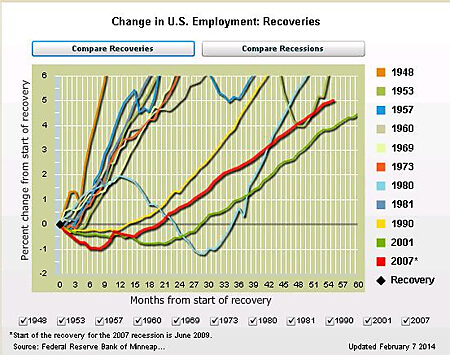 So is the data from the Minneapolis Fed a slam-dunk refutation of the so-called stimulus?

The White House would disagree with that conclusion. They would argue that it’s wrong to compare this recovery to past recoveries. Instead, you have to look at employment and GDP and then compare those numbers to what they would have been in the absence of the stimulus. And that’s precisely how the Obama Administration came up with the jobs and growth numbers in its recent report.

But how, pray tell, did the White House know what jobs and growth would have been in a hypothetical world with no stimulus? The simple answer is that they pulled numbers out of thin air based on economic models using Keynesian theory.

A Program of Redistribution

To explain how this works, let’s briefly digress and explain Keynesian economics. This is the theory that you can jump-start a weak economy by having government borrow a lot of money and then “inject” this money into the economy. And that’s precisely what Obama did with the stimulus, mostly with more spending, but also with some tax cuts for favored constituencies. According to the theory, the money that is being spent by the government (and the recipients of tax cuts) will goose growth and create a ripple effect as producers hire people to deal with the increase in “aggregate demand.”

The Keynesians basically assume that there are no “opportunity costs” when government borrows money and spends it. That’s a bit of economic jargon, but it’s simply a way of saying that Keynesians think that money, for all intents and purposes, will sit idle and gather dust during an economic downturn in the absence of government.

This is a very nice theory...but only on a blackboard.

In reality, there is an “opportunity cost” when government borrows money and spends it. Resources are diverted from the productive sector of the economy. This might not be a problem if government spent money wisely, but stimulus schemes tend to reward interest groups with the most political clout. So instead of outlays for physical and human capital, which at least theoretically might improve the economy’s productive capacity, the White House directed the bulk of the stimulus to redistribution programs and handouts to state governments.

Moreover, the Keynesians don’t seem to appreciate that recessions generally are the result of bad government policies — such as inflation, housing subsidies, etc — that lead to fundamental and unsustainable economic imbalances. Unfortunately, more government spending often is designed to prop up these imbalances, which can create a longer and more painful period of adjustment.

But the biggest problem with Keynesianism is that the real-world evidence is so unfriendly. Consider, for instance, that the White House claimed that the unemployment would never climb above 8 percent if the stimulus was adopted. The following chart shows the actual unemployment projection put together by the Obama Administration, but modified to show the actual monthly unemployment rates the country experienced. 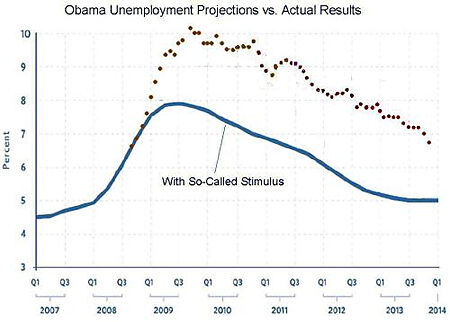 The Obama Administration will argue, with some legitimacy, that the recession wound up being more severe than originally forecast. But that’s why the earlier Minneapolis Fed is so instructive. Even if the White House is merely guilty of failing to correctly predict the recession (a common failing of economists), that hardly explains why the recovery has been so weak, whether measured by GDP or job creation.

But the Keynesians aren’t fazed by these criticisms. No matter how poorly the economy performs during periods of Keynesian spending, they have an automatic response of “just think of how much worse it would have been!”

In other words, Keynesian economics is the perpetual motion machine of the left. They build models that assume government spending is good for the economy and they assume that there are zero costs when the government takes money from the private sector.

That type of model then automatically generates predictions that bigger government will “stimulate’ growth and create jobs. The Keynesians are so confident in their approach that they’ll sometimes even admit that they don’t look at real world numbers. And that’s what the White House did in its estimate. The jobs number (or, to be more technical, the job-years number) is built into the model. It’s not a count of actual jobs.

Needless to say, the political class loves Keynesian theory because it tells them that their vice is a virtue. They’re not buying votes with other people’s money, they’re “stimulating” the economy!

Now that we’ve looked at some of the big flaws in Keynesian economics, a couple of closing thoughts provide some important nuances.

First, some argue that spending cuts (the opposite of Keynesian economics) are the right way to boost growth. We enjoyed a very rapid and strong recovery from a serious post-World War I recession, for instance, presumably in part because reductions in the burden of government spending helped free up resources for more productive use. And we also got a quick recovery after World War II even though the Keynesians warned that reductions in war spending would throw the economy into a tailspin.

That being said, resources don’t get instantaneously reallocated when the burden of government spending is reduced. There could be some temporary economic dislocation as labor and capital get absorbed into the productive sector of the economy.

Second, it’s also important to acknowledge that a nation can artificially enjoy more consumption for a period of time by borrowing from overseas. So if deficit spending is financed to a degree by foreigners (as is the case with American red ink), overall spending in the economy will be higher and people will feel more prosperous.

That’s not an argument for Keynesian economics, particularly since any short-run boost in consumption will be more than offset by long-term interest payments. But it helps to explain why politicians, with their short time horizons, are susceptible to the theory.

So what’s the bottom line? It’s quite likely that the debate about Keynesian economics and “stimulus” will never go away. Supporters of bigger government like the theory and its advocates in academia seem to sincerely believe that debt-financed spending is an elixir that automatically delivers good results.

The historical record doesn’t seem to matter, even if we go all the way back to the failure of Keynesianism in the 1930s. A comparison of Reaganomics and Obamanomics doesn’t have any impact, notwithstanding the economy’s far stronger performance in the 1980s. Supporters aren’t even dissuaded by the fact that the 2009 stimulus radically under performed compared to the White House’s own projections.

Rather than contrition and apologies, the Obama Administration puts out a five-year anniversary report filled with glowing numbers about jobs and growth. But those numbers are artifacts of a model that presupposes a favorable result. If you think those numbers are a good guide to policy, I’ve got some Greek government bonds to sell you.