Did former President Obama himself “leak” the audio of his conversation with some of his former administration officials, in which he falsely claimed that former National Security Advisory Mike Flynn was charged with perjury (it was false statements to the FBI) while describing the Barr Justice Department’s dismissal of the Flynn case as putting “the rule of law at risk”? Or did a former Obama aide take liberties (and possibly violate the law) by recording and leaking the conversation? We’ll probably never know the answer to that one, but what we do know for certain is this: Barack Obama is the last person on earth who should try to lecture anyone about “the rule of law.”

It was then‐​Sen. Obama who in 2005 lambasted the PATRIOT Act as a mortal threat to constitutional liberties, and who two years later during his presidential run said he would end warrantless wiretapping of Americans. Instead, Obama went on to urge renewal of the controversial and ineffective surveillance that Edward Snowden subsequently exposed during Obama’s second term in office, and then sought Snowden’s prosecution for exposing the very warrantless surveillance Obama had previously pledged to end.

In response to the 2008 Senate Select Committee on Intelligence report about the CIA’s rendition and torture program, the newly elected President Obama admitted that “we tortured some folks” but then told Americans to “look forwards, not backwards”—not firing a single CIA employee involved in the torture program, including the Agency’s now‐​current director, Gina Haspel.

Obama arguably violated the Constitution and the War Powers Act by ordering military action against Libya in 2011, despite no attack by Libya on U.S. interests or personnel anywhere in the world prior to Obama’s green‐​lighting a military campaign without congressional consultation, much less authorization.

America’s 44th president set all too many precedents for executive power grabs and miscarriages of justice, as so many of his predecessors did before him. Obama’s lack of self‐​awareness regarding his own role, and that of prior chief executives, in setting the stage for Trump is what makes his hypocrisy in this episode all the more amazing. And the idea that his running mate and vice president for eight years is behaving any differently now—consider the Tara Reade episode—would be laughable were the stakes this November not so incredibly high.

The reality is that Obama, and many of his predecessors over the last 100 years, took deliberate actions that hastened the decline of the rule of law we now confront at the federal level in 21st century America.

That Washington’s Political Class is self‐​serving, corrupt, and not terribly concerned with the daily struggles of most Americans is something many of those voters long ago recognized. The “hope” Obama promised was a chimera, and “Make American Great Again” was the cynical fantasy Trump sold a desperate, and gullible, white working class in his first campaign. As the COVID-19 pandemic has demonstrated, protecting Americans from a genuine threat to their health and safety is the furthest thing from Donald Trump’s mind; his focus, as ever, is on only himself. But it is the gall of Obama’s “rule of law” riff that underscores his political fraudulence—it is the flip side of Senate Majority Leader Mitch McConnell’s (R‐​Ky.) rigged impeachment “trial” of Trump earlier this year.

Obama’s failure to actually hold his own predecessor, and key federal bureaucrats at the CIA, NSA, and FBI, responsible for their “War on Terror” misdeeds at home and abroad makes it easier to understand why the FBI has been able, for so long, to abuse the Foreign Intelligence Surveillance Act (FISA) court process to improperly spy on Americans. The reality is that Obama, and many of his predecessors over the last 100 years, took deliberate actions that hastened the decline of the rule of law we now confront at the federal level in 21st century America. Our path out of this legal and ethical morass must begin with the understanding that ending out‐​of‐​control presidential power is the most important, long‐​term task facing Congress and the nation.

The Obama Administration Destroyed Libya. Could Trump Make It Worse?

The American Bar Association Broke Its Own Rules 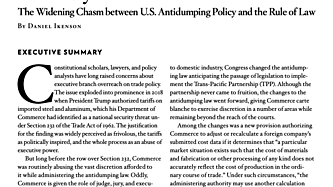 Tariffs by Fiat: The Widening Chasm between U.S. Antidumping Policy and the Rule of Law