If you knew nothing else about President Obama other than looking at the data, you might conclude that he was insensitive to blacks, given that they have done far worse economically under his administration than Hispanics or whites. What is striking is that the president and his advisers still seem to be clueless about which economic policies work and which don’t work. Despite his (at least for this week) emphasis on the economy, he persists in being the anti‐​Reagan, with anti‐​growth policies. In his speech Wednesday in Illinois, the president came up with no new pro‐​growth proposals, just more of what has not worked. 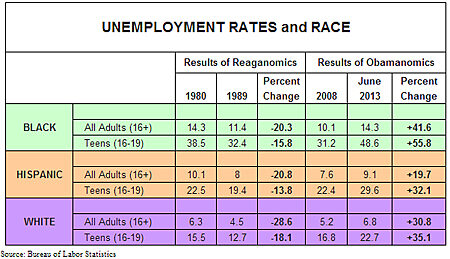 Most people, when confronted with the evidence presented above, probably would realize that they had been mistaken and then try a set of policies that were successful in the past. Not Mr. Obama. Given the tenor of his most recent talks, he seems to be intent on doubling down on his own failed policies.

The president and his advisers still seem to be clueless about which economic policies work and which don’t work.

It was true until the Industrial Revolution of two centuries ago, in a world of little economic growth, that for any individual to become better off, others would have to become worse off. Adam Smith was one of the first to understand that as a result of new technologies and better political and business institutions and organizations — and, most important, the rule of law and proper incentives — everyone could become better off without taking anything from anyone else. Despite the empirical evidence of the past 200 years that Smith and all of the clear and rational thinkers who followed him were right about economic growth, there is still the widespread belief that for one person to prosper someone else needs to suffer. It is this mindset that serves as the basic rationale for socialism and the state as an instrument of income redistribution. One would think that only the uneducated still would have this mindset, but it is most prevalent in universities.

Perhaps a major reason that professors and other educators are so dense when it comes to productivity increases and the resulting economic growth and real rise in living standards is that most classrooms are not much more productive than they were when Aristotle was speaking to a dozen or so students 2,500 years ago. By contrast, entrepreneurs see better ways of producing more for less and visualize and create things that never existed (i.e., the automobile, the airplane, the iPad, etc.) — and they create wealth and jobs. Mr. Obama comes from the government/​academic class rather than the entrepreneurial class and has a much more static view of the world.

Reagan thought like an entrepreneur, and thus intuitively understood that economic growth creates opportunities for everyone — most important, for those who have the least. Mr. Obama has fewer senior advisers and top officials in his administration who have had significant private‐​sector experience than any previous president; hence, like all too many of the European statists and socialists, they think in static terms.

The unfortunate irony is that America’s first black president seems bent on continuing a set of policies that can lead only to continued slow growth or stagnation. The ones who are and will suffer the most from these policies are those who have the least. Mr. Obama no doubt has real compassion for the poor, but until he can begin to understand the destructive second‐​order effects of his policies and see that getting the foot of government off the forces of economic growth is the only real way to make life better for most of them, all too many will continue to suffer unnecessarily.

Oversimplified Economics Is No Substitute for Common Sense