President Obama is proposing to blow through the limits on the federal budget established in the 2011 Budget Control Act, known as sequestration. After years of soaring federal spending, that law actually led to modest spending decreases in 2012 and 2013. But now Obama wants to raise federal spending by $75 billion next year, in addition to the “automatic” rise of about $220 billion in entitlement spending, which his budget does nothing to slow.

Once again journalists are warning of “congressional dysfunction,” recalling the years without a budget, the debt ceiling fights, 11th‐​hour deals, and lame‐​duck showdowns that have characterized the past few years of budget politics.

Republicans and Democrats alike should be able to find wasteful, extravagant, and unnecessary programs to cut back or eliminate.

Back in the summer of our discontent, 2011, when the airwaves were full of warnings about default, I talked to a journalist who was very concerned about the “dysfunction” in Washington. So am I. But I told her then what’s still true today: that the real problem is not the dysfunctional process that gets the headlines, but the dysfunctional substance of governance. The real dysfunction is a federal budget that doubled in 10 years, unprecedented deficits as far as the eye can see, and a national debt sailing past $18 trillion and 100 percent of GDP.

We’ve become so used to these unfathomable levels of deficits and debt — and to the once-rare concept of trillions of dollars — that we forget how new all this debt is. In 1981, after 190 years of federal spending, the national debt was “only” $1 trillion. Now, just 34 years later, it’s more than $18 trillion. Traditionally, the national debt as a percentage of GDP rose during major wars and the Great Depression. But there’s been no major war or depression in the past 34 years; we’ve just run up $17 trillion more in spending than the country was willing to pay for. That’s why our debt as a percentage of GDP is now higher than at any point except World War II. Here’s a graphic representation of the real dysfunction in Washington: 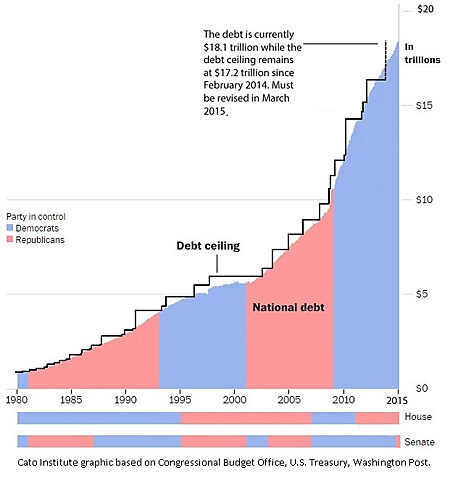 (Hat tip to the Washington Post for the original graphic and to Jonathan Babington for updating it.)

Those are the kind of numbers that caused the tea party movement and the Republican victories of 2010. And many tea partiers continue to remind their representatives that they were sent to Washington to fix this problem.

And where did all this debt come from? As the tea partiers – and all members of Congress — know, it came from the rapid increase in federal spending over the past decade.

Annual federal spending rose by a trillion dollars when Republicans controlled the government from 2001 to 2007. It rose another trillion during the Bush-Obama response to the financial crisis. So spending every year is now twice what it was when George W. Bush entered the White House 14 years ago, and the national debt is more than three times as high.

Republicans and Democrats alike should be able to find wasteful, extravagant, and unnecessary programs to cut back or eliminate. And yet many voters know that both parties have been responsible for the increased spending. Most Republicans, including many of today’s House leaders, voted for the No Child Left Behind Act, the Iraq war, the Medicare prescription drug entitlement, and the TARP bailout during the Bush years.

That’s why fiscal conservatives have become very skeptical of promises to cut spending some day — not this year, not next year, but swear to God some time in the next ten years. As the White Queen said to Alice, “Jam to-morrow and jam yesterday — but never jam to-day.” Cuts tomorrow and cuts in the out-years—but never cuts today.

Federal spending has doubled in the Bush-Obama years. From entitlements to corporate welfare to radically higher military spending to unused NASA towers, surely every member of Congress can find some spending to cut. Fiscally responsible members of both parties should hold firm on the budget caps agreed to in 2011, and then look for opportunities to cut spending. As this incredibly slow recovery staggers on, the economy doesn’t need another $75 billion of deficit spending.

The dysfunction in our governance is not a potential showdown on Capitol Hill, it’s spending, deficits, and debt.