“Why Are Murders Of Gay And Bi Men Up A Staggering 400 Percent?” asks the headline atop Michelangelo Signorile’s new HuffPost column, shared at least 13,000 times so far “Hint: This Alarming Surge Has Taken Place Since Donald Trump Became President,” adds HuffPost unsubtly in a tweet promoting the column. 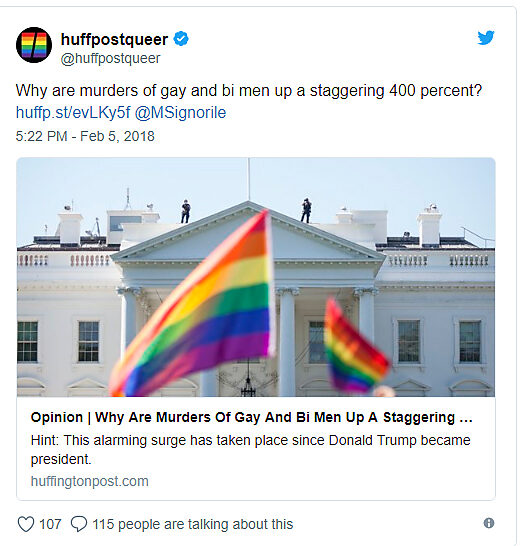 If your response was to wonder first whether such murders are in fact skyrocketing, yours is the right instinct.

With the FBI reporting 11,821 male homicide victims in the U.S. in 2016, even a conservative estimate of how many are gay or bisexual yields a number of annual victims well into the hundreds, and perhaps significantly above that.

Were such a number to jump by 400 percent, it would generate a noticeable blip of 1,000 or more extra gay male murder victims in a single year. Terrifying, right?

One large gay nonprofit, Victory Fund, has already been citing the study in fundraising outreach.

But Signorile, it seems, is working with a different data set. Citing a report by an advocacy group called the National Coalition of Anti-Violence Programs, he says the number rose “from four in 2016 to 20 in 2017.”

Maybe these figures are meant to count only those murders of gay or bi men in which the motive is anti-gay hatred. Signorile notes darkly that hateful groups and persons “may feel emboldened” by current political trends, perhaps explaining a murder spree. And he leads off his piece with the story of one murder last month, the Blaze Bernstein case in California, in which hateful ideology does appear to have played a key role.

But Signorile also mentions in passing that the NCAVP stats include murders following social media hookups. That seemed curious: when do those get counted as hate-related crimes, and when not? So I went and looked at the underlying report, entitled “A Crisis of Hate.”

The first problem with the data is one that the advocates at NCAVP make no effort to hide, which is that the recently launched database consists only of killings reported to them. Among its sources are “media reports, police reports, or … our member programs.” If more killings are being brought to NCAVP’s attention, it’s hard to know whether that reflects an actual increase, or just that the group has been more successful in receiving reports.

The report also relegates to a footnote a fact that might seem significant: the database includes only “individually reported” murders of LGBT persons. It thus excludes the 2016 slaying of 49 persons in Orlando’s Pulse nightclub by an Islamic State adherent. Had these numbers been included, 2017 would have shown a steep plunge rather than sharp rise. The omission is ironic given NCAVP’s (and Signorile’s) concern for murders motivated by hateful ideologies, of which Islamic State’s is assuredly one. 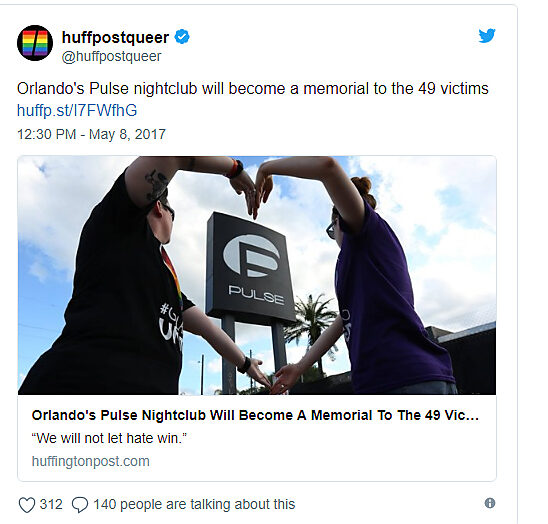 One valuable aspect of the NCAVP report is that it goes on to narrate the individual stories of murders in its 2017 database, including the 20 murders of gay men on which Signorile relies. In one place it asserts that each killing was listed because of “information that indicates a strong likelihood that the motivations behind the violence were either primarily or partially related to anti-LGBTQ bias.” And yet the individual narratives tell an entirely different story. In fact, for 16 of the 20, it is hard to see any evidence at all that the perpetrators were motivated by such bias. In two cases, it’s mentioned specifically that police don’t attribute the killings to hate.

More than a third of the murders were known to have followed hookups in person or on social media, with another quarter consisting of victims found slain at home in unexplained circumstances. Of the social-media-related killings, there is no indication that any resulted from the sorts of persecution games, notorious from certain Russian videos, in which local thugs motivated by a desire to hurt gays as such (as opposed to, say, trying to get money) lure an unsuspecting person to an assignation.

For 2017, I counted in NCAVP’s database not 20, but rather four murders of men in which anti-gay feeling appeared to be a factor. In one especially horrible case from Florida, Juan Javier Cruz was gunned down after defending his friends, who were leaving a restaurant, from anti-gay slurs shouted by Nelson Hernandez Mena, who has been charged in Cruz’s death. The three other cases included a Nevada man fatally shot by his disapproving, abusive father; a prison inmate in Michigan killed by a fellow inmate after a dispute over sexual orientation; and a man shot on a Manhattan street whose killer claimed that the victim had “come on to” him.

Even one murder is too many, but none of these four narrations — in fact, none of the 20 — has an obvious link at all to hate groups or to national political tensions, as Signorile devotes much of his column to implying. Much less does anything in the report document a plot to kill gay men, fueled by organized haters, that has succeeded in quadrupling the murder rate.

Yet many readers will be petrified with fear at such a report, which may be one reason at least one large gay nonprofit, Victory Fund, has already been citing the study in fundraising outreach.

The more you scare, after all, the more they’ll share — and donate.

Gay Marriage Is Here to Stay, Even with a Conservative Court