Earlier this week, the Show‐​Me Institute released “Live Free and Learn,” the first analysis of New Hampshire’s trailblazing scholarship tax credit program, which is the first in the nation to include homeschoolers. The study found that participants in the program were overwhelmingly low‐​income and nearly universally satisfied.

Enacted in 2012, the Opportunity Scholarship Act went into effect for the 2013-14 school year. The program allows businesses to receive an 85 percent tax credit on contributions to nonprofit scholarship organizations that fund low- and middle-income families attending the private school, home school, or out-of-district public school of their choice. The program grants scholarship organizations the flexibility to vary the sizes of the scholarships, but the maximum average of all scholarships disbursed must be no greater than $2,500 for private school students and $625 for homeschoolers.

Parents of scholarship recipients reported extremely high levels of satisfaction. Nearly 97 percent responded that they were satisfied with their chosen private or home school, including 89.5 percent that were very satisfied. 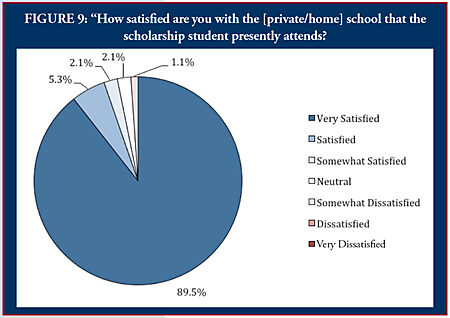 All of the parents whose child attended a public school in the previous year reported that they were more satisfied with their current chosen school. Some parents expressed frustration that the public school to which their children had been assigned was not responsive to their needs, whether academic, social, or disability-related. Several parents complained that the public schools were unable or unwilling to prevent repeated incidences of bullying. One parent wrote:

My daughters were bullied for 4 months in a public school and the school expected my 5 year olds to defend themselves. There was not enough protection. For example, another 5 year old [told] my daughters to “get out of town” and [pushed] them around. The school [brushed] it off [and that] did not settle with me. It upsets me so much that I felt like I had no other option or choice but to continue to bring them there.

Much of the parental satisfaction with their chosen schools is related to academic performance. Though the survey was conducted only a few months into the 2013-14 academic year, 68 percent of parents reported that they had noticed measurable improvement in their child's academic performance since receiving the scholarship. In the words of one parent:

My daughter has already shown improvement in confidence and is becoming more outgoing. She is participating more in classes as they are small. Her teachers are all connected to her in many ways as advisors or coaches. She feels part of a community at this school. She is taking courses like Mandarin and getting an A. This would not have been possible in the public school option. I am extremely happy and grateful that my daughter is at this school. I have cried more than once as I watch her reach new highs. 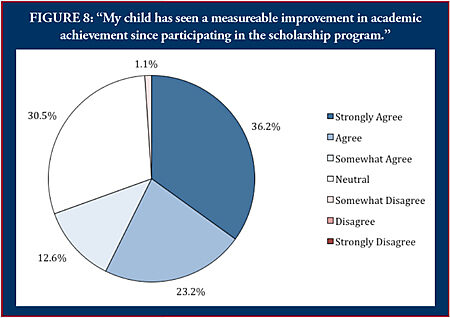 Our school has always tried very hard to make it possible for my daughter to attend, but with a modest income and growing basic family expenses (such as housing, heating, transportation and fuel costs) continuing at a private school has been increasing difficult and stressful. I am grateful that in combination with the Network for Educational Opportunity, we somehow have managed to enroll my daughter for this year’s school term, which would have been impossible without the help our school and that of the additional funding from the Network. 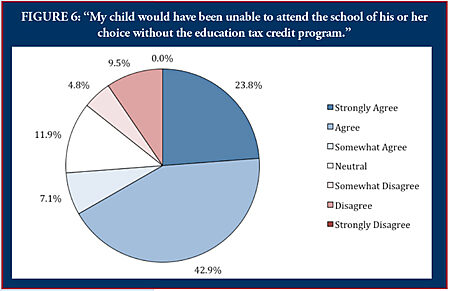 Two attempts to eliminate the program in its first year limited its size. The first was an effort to repeal the law—the NH House passed the repeal by the NH Senate narrowly voted to save the program. Nevertheless, the uncertainty about the program’s future drove away potential donors, thereby limiting the amount of funds available for scholarships.

More damaging was the lawsuit alleging that the program violated the state’s historically anti-Catholic “Blaine amendment.” In a flawed and unprecedented decision, the trial court judge excluded religious schools from the options available to scholarship recipients, which greatly reduced the number of families who wanted to participate in the program. That decision is being appealed at the state supreme court.

Families participating in New Hampshire’s pioneering scholarship tax credit program report near-universal levels of satisfaction because it enables them to choose the best educational fit for their children. Whatever parents are seeking for their children—improved academic performance, more engaged teachers, social acceptance, freedom from bullying, special needs programming, and so on—they are more likely to find it when they have more than one choice. Policymakers across the country who are seeking to expand the educational choices available in their state should look to New Hampshire as a model.