As The Washington Post has documented, few police officers are ever arrested, let alone prosecuted or convicted, after officer‐​involved shootings and in‐​custody deaths. Although there have been several recent high‐​profile cases in which officers have been charged with crimes for shootings in the line of duty — most recently in Baltimore and Fairfax County, Virginia — the number of officers arrested is likely to remain negligible. Supreme Court precedent and certain aspects of police culture and internal discipline combine to protect officers in use‐​of‐​force cases that can preclude criminal investigation and arrest.

All of this supports police officers who are involved in justified shootings. But it also makes it difficult to impossible to convict officers of bad shootings. And because of the protections afforded to public employees in general, and to police officers especially, it often requires a criminal conviction to remove an officer from the job. Consequently, bad cops are notoriously difficult to fire. Consequently, we often see a small percentage of officers account for a huge percentage of many policy agencies’ shootings and brutality complaints.

Three principle Supreme Court decisions have essentially laid out the lethal force standard for police officers in the United States. But in those decisions, the court also inadvertently created a blueprint for officers to duck accountability. In Graham v. Connor (1989), the Supreme Court said that any seizure of an individual — including the use of force — must fall under the “objectively reasonable” standard: Would an average police officer in the same position view the officer’s actions as reasonable given all the information at the officer’s disposal? Put another way, if the circumstances led an officer to reasonably believe the suspect was armed and threatening, the officer would be deemed justified in using lethal force, even if the person turned out to be unarmed.

Graham ties closely to another ruling just a few years before, Tennessee v. Garner (1985). In that case, a police officer fatally shot an unarmed burglar as he was fleeing the scene. The Court said that because the burglar, Edward Garner, posed no direct threat to the officers, nor did they have reason to believe he was a threat to the public, the police were not justified in shooting him simply to prevent escape.

The last case, often overlooked, is Garrity v. New Jersey (1967). It looks at how police agencies investigate their own. Since law enforcement agencies are often responsible for their own personnel oversight, police departments may compel officers to give statements about an incident in order to determine whether or not there was any misconduct. However, under Garrity, any compelled statements that would otherwise incriminate the officer may not be admitted in criminal proceedings, due to the Fifth Amendment protection against self‐​incrimination. As a result, police officers are granted many procedural protections before questioning in shooting incidents. Some of these protections have extended Garrity and been codified in what have become known colloquially as “Law Enforcement Officers’ Bills of Rights” (LEOBR).

LEOBR vary from jurisdiction to jurisdiction where they exist, but generally they provide a litany of privileges to officers that aren’t afforded to non‐​law enforcement suspects. For example, there may be mandatory “cooling off” periods after a shooting, guaranteeing the officer anywhere from 48 hours to 10 days before being initially questioned about his version of events. (Sometimes, officers go longer than that without being questioned.) Indeed, some of the emerging body camera policy proposals, such as one considered in Los Angeles, would give officers the opportunity to review the video evidence before giving a statement, a privilege rarely afforded to citizens who aren’t police officers.

Maryland was the first state to institute LEOBR and held hearings last month in which 15 LEOBR proponents—police union representatives and leadership—testified in support the law. The police unions denied that officers would or have ever used the cooling‐​off periods to concoct a false story and collude with other officers to cover up misdeeds.

Even in areas where LEOBRs are not present, there is evidence that officers indeed collude with one another to create false narratives about violent encounters with suspects.

University of Cincinnati officer Ray Tensing reported that he was being dragged by a car he pulled over for a missing tag when he fired his weapon point‐​blank into the face of Samuel DuBose. His body‐​worn camera ended up undermining his story. But Tensing’s report — that he felt he was in imminent danger, and thus in line with the Supreme Court standard — was initially corroborated by fellow officers on the scene. The internal policing cultural demand known as the “Blue Wall of Silence” very often puts loyalty over honesty and personal integrity, particularly when it comes to misconduct investigations. Without video, it is unlikely Tensing would have been criminally prosecuted and, very possibly, would still be on the job today.

Likewise, the initial reports in the shooting death of Tamir Rice were unsupported by surveillance video. The footage showed the officer, Timothy Loehmann, jumped out of the patrol car and shoot the 12‐​year‐​old almost instantly. The more experienced officer who was driving the car, Frank Garmback, was not cooperative with the county prosecutor’s investigation, according to the 224‐​page prosecutor’s report.

Of course, not all officers comply with the Blue Wall’s demand for silence. Fairfax County, Virginia officer Adam Torres’s shooting of John Geer in 2013 was not caught on camera. Furthermore, every officer and supervisor on the scene effectively described the incident as a ‘bad shoot,’ despite Torres’s claims that Geer had “brought both his hands down in a quick motion towards his waist.” Torres’s claim is a variant of an oft‐​repeated explanation for officer‐​involved shootings that a suspect ‘reached for his waistband.’ Why it took two years to fire and indict Torres has yet to be disclosed by the Fairfax County police and prosecutor, but his indictment shows that the Blue Wall is at least not completely impregnable.

The recent charging of Baltimore police officer Wesley Cagle for shooting a burglar in December 2014 indicates that some prosecutors are becoming more skeptical of police narratives after use‐​of‐​force incidents. The facts of the Baltimore shooting are not yet clear. But prosecutor Marilyn Mosby says Cagle shot Michael Johansen in the groin after he made light of being shot for being non‐​compliant. Johansen survived, and Cagle is facing five criminal counts, including attempted first‐​degree murder.

Mosby determined that the other two officers’ initial shooting of Johansen was justified, even though he was unarmed. Cagle’s actions were not justifiable because Johansen was on the ground and incapable of being an imminent threat. Again, it is unclear why eight months passed between the incident and Cagle’s indictment.

Sift through The Post’s database of people killed by police officers in 2015, and you’ll begin to notice a pattern: Most of those were armed and pointed or otherwise approached police with a weapon drawn and ready to use. Undoubtedly, the accounts are true in many instances. And it is unfair to suggest that officers usually create a story that would justify an otherwise “bad shoot,” but it is unlikely that they’re all entirely accurate.

But even if every single account is true, the “objectively reasonable” standard provides legal cover for shootings that can be plausibly justified under the law, but may not have been necessary. Given the sheer number of killings recorded (686 to date in 2015), and that more than 15 percent of those killed were unarmed (65) or had a toy weapon (23), non‐​lethal methods of resolution or de‐​escalation could have saved at least 88 lives.

Officers have a dangerous job and sometimes have reason to fear for their safety. In 2015, 84 officers have died in the line of duty, according to the Officers Down Memorial Page. Of those, 28 have died by non‐​accidental gunfire or non‐​vehicular assault. The police have the right to protect themselves, but they are also expected to assume a certain amount of risk in order to protect the public. As several former officers and trainers wrote on a popular police website, there is no officer safety exception to the Constitution. As such, the mere possibility of danger should not precipitate a “shoot first, ask questions later” police mindset on the streets. And yet it has.

Because we ask police officers to put themselves in harm’s way, they should get some leeway for split‐​second reactions in situations they perceived to be dangerous. Sometimes those reactions will be wrong, and innocent people will die because of an honest error in judgment that does not necessarily warrant prison time. However, in those circumstances, public safety demands that officers who make those sorts of mistakes even once be removed from the force and from policing. It doesn’t seem unreasonable to say that if you kill an innocent person, we aren’t going to wait to see if you do it a second or third time. The public shouldn’t have to absorb that risk. And of course, officers who display gross negligence or malice should be prosecuted.

Unfortunately, use‐​of‐​force jurisprudence allows police officers to use lethal force at the first instant a suspect flinches or moves in any way that could be construed (or recounted) as hostile. The Blue Wall of Silence then encourages police to support their colleagues’ accounts of events, even when they result in the unnecessary death of an innocent. Laws and policies that protect police leave the door open for less‐​than‐​forthright accounts of confrontations that more often than not end in the police officer’s favor.

Changing the constitutional standard for use of force would be difficult. The Supreme Court doesn’t generally rewrite its rules on such issues, and it is very unlikely Congress would pass a law to increase police officers’ criminal liability.

Although local officials can’t change what’s legal, they can change what’s permitted as a matter of policy. Mayors, city councils, and other policymakers can instruct police agencies to change their rules guiding use of force to require more emphasis and training for deescalation and peaceful conflict resolution.

Police contracts can be negotiated to make it easier to terminate officers who shoot too quickly, even if those contracts retain the same protections against criminal prosecution. Termination should result for any officers named in lawsuits that municipalities settle or lose in excessive force and wrongful death cases. At minimum, such settlements should trigger administrative reviews of the officers named and those cases should be noted in their personnel files.

The available data indicate that current laws and policies make police‐​involved shootings too common, leaving many families shattered and the general public less safe. Absent radical legal change at the federal level, police departments and local governments can still take steps to reduce the number of police shootings and remove the officers responsible for unnecessary use of force from their ranks.

Whether or not a shooting is legal is a separate question than whether it was right. We need to change use‐​of‐​force policies to reflect that. 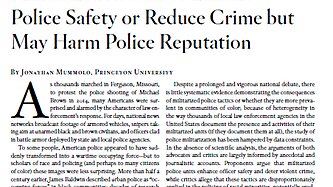