Immigration and Customs Enforcement (ICE) is seeking tools that will automate the monitoring of visa applicants and produce leads for deportation proceedings. The proposed “Extreme Vetting Initiative” will be ineffective and erode the civil liberties of immigrants and citizens alike.

That the Trump administration is pursuing such an initiative is hardly surprising. During his presidential campaign candidate Donald Trump came out in favor of so‐​called “extreme vetting,” including immigration bans based on ideological views. During an August 2016 rally Trump said, “We should only admit into this country those who share our values and respect our people.”

In the early days of his administration Trump signed an executive order requiring the Department of Homeland Security secretary, the director of National Intelligence, and the director of the Federal Bureau of Investigation to build an immigration program that would include (in part), “a process to evaluate the applicant’s likelihood of becoming a positively contributing member of society and the applicant’s ability to make contributions to the national interest.” ICE plans to have the initiative up and running by September next year, although last month Trump ordered DHS to “step up” extreme vetting.

The Extreme Vetting Initiative’s Statement of Objectives includes the requirement outlined in the executive order, noting that it fulfills the order’s mandate:

Needless to say, “contributing member of society” and contributions to “national interests” are not legally defined terms.

In a letter to Acting Secretary of Homeland Security Elaine Duke fifty‐​four computer scientists, engineers, and mathematicians explained that algorithms would not be effective at singling out “national interests” or people who will be a contributing members of society.

Nonetheless, a backgrounder on the initiative shows that the Extreme Vetting Initiative will include the analysis of social media activity:

ICE has also indicated that it is interested in using “advanced analytic, data science, or machine learning capabilities to evaluate the likelihood of an applicant conforming with ICE and immigration law expectations.” This is a significant concern, not least because the predictive abilities of current technology is hardly up to the task of providing the analysis ICE seeks. In a letter to Elaine Duke last week, fifty‐​six civil liberties and immigrant rights groups made this point:

[..] it is likely that any developer tasked with building this system will rely on proxies—for example, using an individual’s income to measure his or her contribution to society, or analyzing social media posts for “tone” considered threatening to the United States. Indeed, ICE documents place a heavy emphasis on social media monitoring, ignoring the fact—recently verified by a DHS Inspector General report—that DHS has failed to put into place adequate mechanisms to measure the value of its monitoring programs.

What’s more, the criteria that ICE intends to use social media analysis to predict are outside the realm of existing technology. The meaning of content posted on social media is highly context‐​dependent. Errors in human judgment about the real meaning of social media posts are common. Algorithms designed to judge the meaning of text struggle to make even simple determinations, such as whether a social media post is positive, negative, or neutral. Moreover, most tools cannot reliably analyze text in languages other than English.

This initiative is tailor‐​made for discrimination. The proposed program’s aims—to evaluate whether an individual will become “a positively contributing member of society” or whether he or she “intends to commit criminal or terrorist attacks”—are lifted directly from the president’s “travel ban” executive orders, multiple versions of which federal courts enjoined as discriminatory. Indeed, President Trump has expressly said that his proposed ban on Muslim immigration had “morphed into extreme vetting for certain areas of the world”—the very name of this initiative.

In short, the initiative is set to be unreliable and discriminatory.

As if this wasn’t disturbing enough, the background document on the initiative states that it will produce at least 10,000 “investigative” leads each year.

This initiative won’t only be used on visa applicants. As the slide from an ICE PowerPoint presentation shows, the initiative will also be used to “perform regular, periodic and/or continuous review and vetting of nonimmigrants for changes in their risk profile after they enter the United States.” Nonimmigrants include tourists, students, and temporary workers. 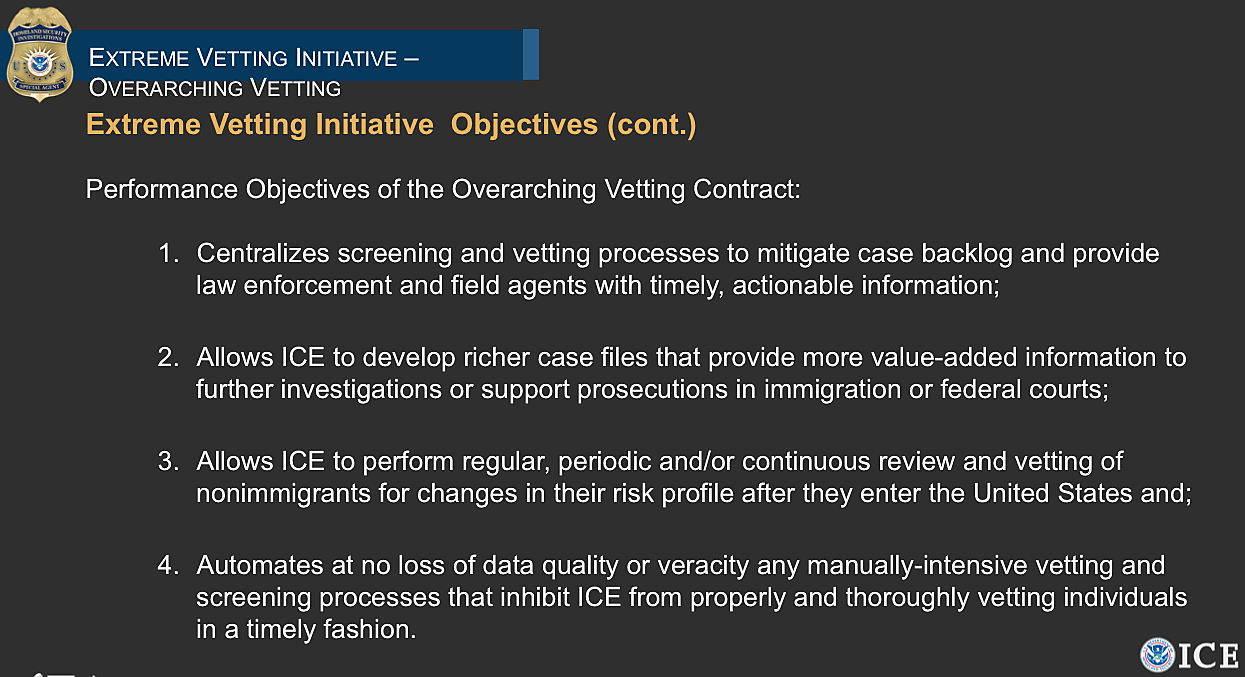 The Extreme Vetting Initiative should concern citizens as well as non-citizens. If ICE uses the automated snooping technology outlined in the initiative documents the agency will undoubtedly encounter information related to not only visa applicants and nonimmigrants but the citizens they communicate with as well. Anyone working closely with students and foreign workers, for instance, should be worried about an ICE initiative that aims to collect and analyze troves of these people’s social media information. Once the Extreme Vetting Initiative is up and running citizens and foreigners alike will surely limit their online speech.

Even citizens who don’t work with immigrants ought to be wary of the technology that will be used to implement this ICE initiative. State and local law enforcement have been increasingly using data analysis tools. The Los Angeles Police Department, for example, is already using social networking tools designed by Palantir, which has built powerful intelligence tools for ICE.

In Chicago police use predictive tools to assign arrested persons a threat score. Those with a high enough score will make the “heat list” and be the target of community surveillance or receive a home visit from an officer.

But, as Andrew Guthrie Ferguson, a law professor at the University of the District of Columbia, David A. Clarke School of Law, outlined in his recent book The Rise of Big Data Policing, this program is hardly without flaws:

Because of the heat list’s prominence in the national discussion about predictive policing, a few of the problems with the practice have emerged. For example, the Chicago Tribune reported on the story of Robert McDaniel, a 22‐​year‐​old man who was visited by a police commander at his home. Like others on the heat list, he was warned to avoid a criminal path. He had one misdemeanor conviction but had been placed on the heat list anyway. When he inquired about why he ranked high enough to warrant a visit, he was informed that his inclusion stemmed from the shooting death of his best friend a year ago. His personal loss increased risk his risk of violence, according to the algorithm.

When considering initiatives such as the Extreme Vetting Initiative we should keep in mind that the technology that makes such projects possible won’t be discarded once Trump leaves office. Nor will the technology be abandoned once the national security focus shifts from Islamic extremists to the next target.

Plans for a discriminatory and unreliable program that threatens civil liberties is too high a price to pay for fulfilling the president’s ill‐​considered campaign pledge. Scrap them.