President Trump signed an order banning most legal immigration from abroad last month. It was the latest in a string of actions by the Trump administration to restrict immigration and travel. The president has touted these “bans,” first on China and then other countries, as being early and effective measures to stop the pandemic, but he was wrong.

A new analysis by the Cato Institute shows that U.S. airports recorded nearly 10.7 million entries (mostly by travelers without U.S. citizenship) directly from countries with confirmed COVID-19 cases as of April 7. The government waited an average of 18 days after a country had confirmed cases to impose any travel restrictions, and for more than two dozen countries, it waited more than a month.

Trump’s bans didn’t and couldn’t stop all travel by U.S. citizens and legal permanent residents. Even if they were much stricter toward other noncitizens and much earlier, it wouldn’t have mattered. Too much travel had already occurred, and too many U.S. citizens travel. Yet Trump relied on these bans as his primary early response to the pandemic. He repeatedly cited them as protecting Americans, but the evidence shows he should have focused far more on domestic measures.

The president has touted these “bans,” first on China and then other countries, as being early and effective measures to stop the pandemic, but he was wrong.

In early February, he assured the public that his February 2 ban on most noncitizen travel from China had “shut it down.” Yet by the time of the ban, the United States had already accepted more than 436,000 passengers from China (mostly non-U.S. citizens) since the outbreak there was reported on December 31.

Among these Chinese passengers were more than 6,000 from Wuhan — the center of the outbreak. One of these Wuhan travelers entered the U.S. in Chicago on January 13, the first known entrance of a person with a COVID-19 infection. Even after the president restricted travel, another 43,000 passengers entered the country on direct flights from China — 62% were not U.S. citizens.

In mid‐​March, the president decided to restrict travel from Europe, stopping it from Europe’s Schengen Area and then from Ireland and Britain three days later. In early April, the president was bragging that he “cut off Europe very early.” But again, already about 2.6 million entries (again mostly non-U.S. citizens) had occurred from countries with COVID-19 in Europe and the British Isles.

The last restriction occurred on March 20 when the U.S. stopped issuing new visas worldwide except in emergency circumstances. This final restriction was looser than the others because it only applied to new visa applicants. People who already had visas (i.e., permission to travel) could still come to the U.S.

Numerous countries without any restrictions had recorded cases many weeks earlier. The Philippines and India, for example, identified their first cases 50 days before the Trump administration restricted visas. For Japan, South Korea, Taiwan, and Australia, it was closer to two months after. Even now, noncitizens from these countries can legally all still travel visa‐​free.

In the case of China and Europe, the bans exempted U.S. citizens, legal permanent residents, and their immediate families. In the case of the visa suspension, the ban exempted all current visa holders of any kind. The result was nearly a million entries from countries with COVID-19 cases after restrictions took effect.

Yet the president’s order last month was narrower than this broad suspension, applying only to a subset of visas. In practice, it didn’t really change anything.

It was always hopeless to expect that reactive travel restrictions on foreigners would have had any meaningful effect on the U.S. epidemic then or now. Too many Americans (either U.S. citizens or legal permanent resident noncitizens) travel, and the epidemiological research shows that even a tiny number of travelers will spread a highly infectious disease just as well.

This is why COVID-19 has been found in virtually every country regardless of its immigration level. The problem isn’t that Trump acted too slow. It’s that he fixated on international travel almost exclusively and long after the U.S. became the world’s leader in COVID-19 cases. This myopic focus on migration may explain why his administration did so little to prepare a vigorous domestic response.

Trump wants credit for restricting travel before other countries. Yet many of those other countries have contained the epidemic far better than the U.S. by expending their energies on testing and tracing cases. America needed a leader who sought out novel tools to stop a novel virus, rather than returning to his favorite tool again and again. 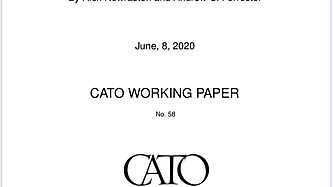