How would you measure congressional success? Even though the new Congress is only two months old, there has been much criticism of both the leadership and the members. The Republicans promised to reduce government spending, reform the tax code, and reduce the regulatory burden.

In order to measure whether Congress is indeed reducing spending, it is important to establish the appropriate baseline.

In order to measure whether Congress is indeed reducing spending, it is important to establish the appropriate baseline. In the enclosed table, I have taken total government spending minus the amount that state and local governments raise and spend on their own. I have also taken out net interest payments, and then provided two sets of figures, one including defense spending and one without it. The reason for separating it out is that defense is the primary function of the federal government, and the amount spent on defense should be what is necessary to protect the American people from external threats. The size and allocation of the defense budget is subject to endless debate. All other government spending should be subject to the following constraints: Is it constitutional? Do the benefits exceed the costs without restricting liberty? Finally, can the problem that the spending is supposed to cure be best done by the federal rather than some other level of government?

By the end of the Reagan administration in 1988, nondefense spending had been reduced to 11.9 percent of GDP. Remember, the Reagan administration had increased defense spending as part of its strategy to end the Cold War. As late as 1988, it was still running almost 6 percent of GDP (as contrasted with about 3.8 percent last year). By the end of the Clinton era in 2000, total federal government spending minus interest payments had dropped to 15.4 percent of GDP, more than 2 percent below Reagan, but all of the reduction in spending during the Clinton years had come out of defense spending. Both defense and nondefense spending rose during the George W. Bush era, but spending really took off at the beginning of the Obama presidency with the passage of the “stimulus” bill. The surge of government spending in 2009 resulted in four years of trillion-dollar-plus budget deficits (8-10 percent of GDP).

The concern over the massive deficits resulted in the heavily criticized “sequestration.” But sequestration has worked by causing a real reduction in government spending as a share of GDP. The president now wants to do away with the sequestration and increase spending again. During the next few months, the new Republican majority will be producing the new budget for the fiscal year that will start on Oct. 1. The Republicans have said they are going back to “regular” order, which should result in them sending 13 separate spending bills to the president for his signature. 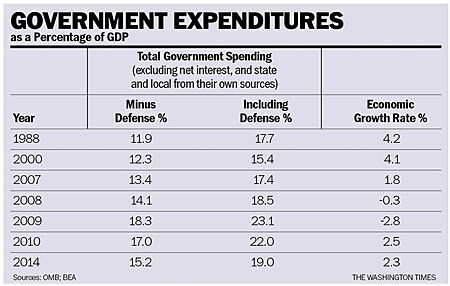 The Republicans should hang tough and play hardball with the president, including letting parts of some government departments go without funding (which the mainstream press will portray as a partial government shutdown), or deficits and spending will begin to rise again as a share of GDP, which will further slow economic growth.

Many taxpayer advocacy groups and economic think tanks, including the Cato Institute, frequently provide the press and Congress with lists of counterproductive, destructive and wasteful spending, so those in the new Congress will not lack for places to cut spending, provided they are willing to stand up to the special spending interests (those who are focused on exploiting taxpayers for personal gain). It is well recognized that within the next few years, the increasing share of the budget going to entitlement spending will overwhelm the rest of the budget, so the next Congress and the new president will no longer be able to kick the can down the road.

The evidence continues to grow that once total government spending (federal, state and local) in almost any country reaches 25 percent or so of GDP (the U.S. government spends well over one third of GDP), economic growth begins to slow, and at some point the economic death spiral begins (note Greece). We will know by the end of next year's budget cycle whether the Republicans are serious about reducing real government spending or, like their political opponents, are content with letting the United States continue to drift further toward economic stagnation or worse.