Housing prices are rapidly rising in many urban areas. Prices in the San Francisco Bay Area are higher today — even after adjusting for inflation — than they were at the height of the 2006 bubble. Data from the Federal Housing Finance Agency bears this out: 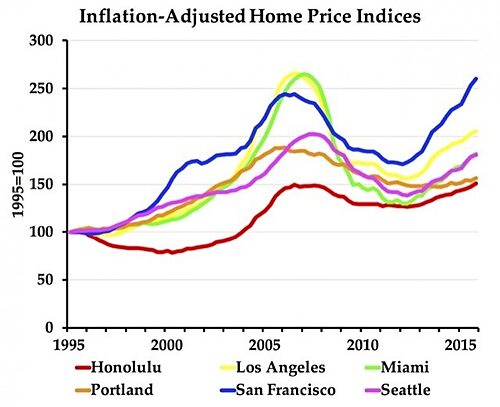 Yet this is not a nationwide problem. Prices in many other areas remain quite reasonable. Houston and Dallas/Fort Worth are the nation's fastest-growing urban areas, yet they remain affordable (which is one reason they are growing so fast). Here are home prices for areas that don't try to control urban sprawl (again, the data comes from the Federal Housing Finance Agency): 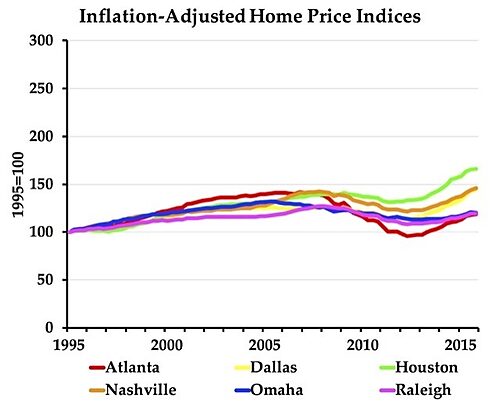 The difference is that the urban areas with high housing prices have almost all tried to contain urban "sprawl" by limiting the amount of land around the cities that can be developed, using policies such as urban-growth boundaries, urban-service boundaries or concurrency requirements that limit new growth until infrastructure is totally financed. Anyone who understands supply and demand knows that limiting supply in the face of rising demand leads to higher prices.

The only real solution is to repeal the state laws and local plans that created the problem in the first place.

The next president should learn from these trends and realize that federal housing policies that increase demand, such as down-payment assistance, will only raise housing prices even more in areas with supply restrictions. The best approach for the federal government would be to encourage state and local governments to reduce land-use constraints.

Supposedly, we need to contain urban growth to protect farms, forests and open spaces. But America uses just one-third of its agricultural lands for growing crops, and only 3 percent of the country has been urbanized; the rest is rural open space.

To protect resources we have in abundance, growth constraints create artificial and costly shortages of housing and other real estate. These constraints not only make housing more expensive but also make housing prices more volatile (meaning bubbles and crashes).

Growth constraints are also one of the main causes of increasing wealth inequality, as they give huge windfalls to existing homeowners while impoverishing renters and first-time home buyers. Census data shows that high housing prices are pushing low-income black families out of many urban areas.

The San Francisco/Oakland urban area, for example, had 10 percent more people in 2010 than in 2000, but 14 percent fewer blacks. Putting growth constraints around your city is like putting up a sign saying, "No blacks or working-class people allowed."

The White House and others have proposed to make housing more affordable by "building up," that is, by rezoning existing neighborhoods to higher densities and subsidizing developers who will build those densities. But this never works; the densest urban areas tend to be the least affordable, due partly to higher land costs and partly because higher-density housing costs more to build per square foot than single-family homes. Data from the 2010 Census illustrates this well: 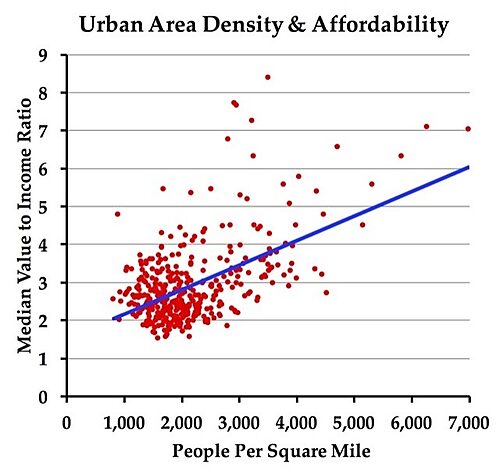 The only real solution is to repeal the state laws and local plans that created the problem in the first place. That means abolishing growth boundaries and other constraints and allowing developers to build and sell homes outside of existing urban areas.

Don’t Hate Airbnb – Profit from It