It was a hashtag prosecution, a social‐​media campaign posing as a legal case: #ExxonKnew. And like yesterday’s media balloon become today’s litter, its deflated remains floated back down to earth last week in a New York courtroom.

Whatever you think of them otherwise, ExxonMobil’s communications on climate change had neither the intent nor the effect of wronging the company’s investors. New York’s since‐​disgraced attorney general Eric Schneiderman had no business bringing a securities‐​fraud case on that basis, and there was nothing his successor, Letitia James, could have done to rescue the case.’

In a 2003 case called Nike v. Kasky, no less a liberal authority than Supreme Court Justice Stephen Breyer warned that it was dangerous to freedom of speech to arm ideological adversaries with legal power to bring fraud charges against businesses based on those businesses’ public statements about contentious issues. (The full Court in Nike did not reach that issue, instead dismissing the case on other grounds.)

New York’s prosecution of Exxon deserves to be studied in law schools for years to come. But not for the reasons its authors once hoped.

The Nike case involved claims by the apparel maker about the treatment of its workforce, but the climate issue offered a similar line of attack. Since at least 2012 activists had been looking for ways to gin up lawsuits or even prosecutions over what they termed climate denial — or, to use a more neutral phrase, advocacy on the wrong side of climate debates. Win or lose, and First Amendment or no, gaining access to the internal files of energy companies and their ideological allies could be politically valuable. The ambitious Schneiderman, widely spoken of as a future New York governor, was willing to go first.

As part of the same effort, a team of state AGs used subpoenas to go after free‐​market non‐​profits such as the Competitive Enterprise Institute as well as university scientists deemed too close to Exxon’s views. The pushback on both that and the Schneiderman suit was intense, from places such as the editorial boards of USA Today (an “exercise in politics” raising “serious First Amendment concerns”) and the Washington Post (“Exxon deserves criticism, but it didn’t commit a crime .… Legitimate scientific inquiry depends on allowing strong, even unfair, criticism of the claims that scientists make.”)

At the last minute Schneiderman’s successor as New York attorney general, James, dropped two counts that would have required a showing of intent by the oil company. That still left the state’s elastic, ultra‐​broad Martin Act, which gives her office unusual powers that are hard to square with due‐​process protection. (“The Martin Act is a nearly empty vessel into which the AG can pour virtually any content that he wants,” per Reuters).

But even the Martin Act charges failed. Over the course of the trial, Judge Barry Ostrager also chided the state — to quote the New York Post’s account — “for being unprepared, for indulging in ‘agonizing, repetitious questioning about documents that are not being disputed’; for pretending a witness was an expert when she wasn’t,” and much more.

In his full, scathing opinion, Judge Ostrager rejected each of the state’s themes. “ExxonMobil’s public disclosures were not misleading.” While the company had used figures for a proxy cost of carbon that varied at different times and places, it gave intelligible and legitimate reasons for doing that. Despite three and a half years of investigation and pre‐​trial discovery, New York had “failed to establish” any misrepresentation material to investors. While not reaching the issue of damages, the court “would have found that the Office of the Attorney General failed to prove any damages.”

In particular, “The Office of the Attorney General produced no testimony either from any investor who claimed to have been misled by any disclosure, even though the Office of the Attorney General had previously represented it ‘would call such individuals as trial witnesses.’” The state had made a fuss over various reports from the company without being able to demonstrate that the content of those reports ever influenced investment analysts or had any other market impact.

That was just for starters. New York’s conduct of the prosecution, the judge noted, had begun with “politically motivated statements” by Schneiderman claiming that a “longstanding fraudulent scheme” had been “sanctioned at the highest levels of the company,” which had supposedly erected “a Potemkin village to create the illusion that it had fully considered the risks of climate change regulation” for its business operations. “The Court finds these allegations to be without merit.” As the state’s withdrawal of its intent‐​based charges late in the game made clear, the misrepresentations on this set of issues were not the ones emanating from Texas.

The Exxon corporate culture, known as a straight‐​arrow kind of place that emphasizes meticulous planning and documentation, came off well at trial. There “was not a single ExxonMobil employee whose testimony the Court found to be anything other than truthful.” Meanwhile, the judge wrote, cross‐​examination had “eviscerated” the contentions of the state’s expert witnesses. In one particularly dubious bit of legal argumentation, the state had argued that an anti‐​Exxon press hit in the Los Angeles Times that momentarily nicked the company’s share price should itself be taken as evidence of the state’s claims about investor harm, being “corrective disclosure.” The L.A. Times piece, of course, reflected agitation by the same body of activist critics who had urged Schneiderman to sue. The judge aptly declared the theory “circular.”

New York’s prosecution of Exxon — a legal vendetta against a target chosen for essentially political reasons — deserves to be studied in law schools for years to come. But not for the reasons its authors once hoped.

Greta Thunberg and Prince Harry Are Wrong. Our Ingenuity Is the Earth’s Ultimate Resource 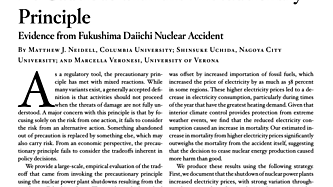