Much of Northern Europe, including Britain, is suffering under the coldest winter and spring of the last 30 to 100 years. The Northeastern part of the United States has had a record cold March. The record cold in Europe has killed thousands and cost billions. It was not supposed to be this way.

Back in 1998, scientist Michael Mann published a paper with the famous “hockey stick” showing a sharp rise in global temperatures. Mr. Mann and others argued that if global action was not taken immediately, then the temperature rise would be rapid and uncontrollable. Much of Mr. Mann’s work was the basis for Al Gore’s famous film An Inconvenient Truth. What has turned out to be an inconvenient truth is that Mr. Mann and his allies were sloppy in their research and engaged in a campaign to disparage their critics.

The United Kingdom’s Met Office has been a major source of global temperature data in recent decades, and has been heavily relied upon by global‐​warming proponents. On March 12, a report written by David Whitehouse and published by the Global Warming Policy Foundation concluded that “there has been no statistically significant increase in annual global temperatures since 1997.” In the accompanying chart, using the same official data from the Met Office that the United Nations Intergovernmental Panel on Climate Change uses, it can be easily seen that global temperatures have not been rising as predicted by the best‐​known climate models.

According to the Global Warming Policy Foundation, “The report shows that the temperature standstill has been a much discussed topic in peer‐​reviewed scientific literature for years, but that this scientific debate has neither been followed by most of the media, nor acknowledged by climate campaigners, scientific societies and prominent scientists.” Lord Turnbull, former Cabinet secretary and head of the Home Civil Service, commented: “Dr. Whitehouse is a man who deserves to be listened to. He has consistently followed an approach of examining observations rather than projections of large‐​scale computer models, which are too often cited as ‘evidence.’ He looks dispassionately at the data, trying to establish what message it tells us, rather than using it to confirm a pre‐​held view. “Those of us who have studied “public choice theory” are not particularly surprised that many scientists and their media followers are in denial about what is increasingly obvious — that is, most of the climate projections were just plain wrong. If a person has a strong vested interest in a particular point of view and obtains government grants to show what politicians want to hear, or if he has been very public in his beliefs based on faulty data or information, it is hard to say, “I was wrong.” Politicians embrace any theory that justifies more taxing, spending and regulating because their power increases along with the accompanying financial opportunities. Nobel laureate, economist and philosopher F.A. Hayek explained how there are limits to the knowledge that any one individual can possess, yet many have the “fatal conceit” that they know more than they do, and thus, they think they can plan and predict in ways they cannot. It is no surprise that climate models were wrong. For them to have been right, the model builders would have had to know all of the significant variables that affect climate, and the magnitude and interaction of each of those variables. There is virtually no single variable on which scientists are in total agreement about the magnitude of its effect. Carbon dioxide (CO2), for example, is considered to be very bad by most global‐​warming alarmists, including many officials in governments. We know that some level of CO2 is necessary for life, but we do not know the optimum level. The higher the level, the more rapidly plants grow, and the cheaper food becomes. It is just as plausible to say that there is too little CO2 in the atmosphere as that there is too much to maximize human well‐​being. 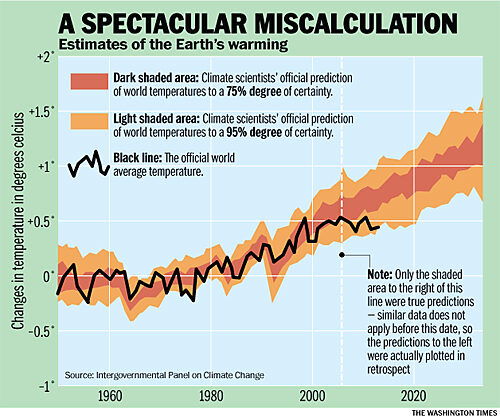 One of the world’s foremost experts on climate change, professor Roger Pielke Jr. of the University of Colorado at Boulder, recently wrote: “Flooding has not increased over the past century, nor have landfalling hurricanes. Remarkably, the U.S. is currently experiencing the longest‐​ever recorded period with no strikes of a Category 3 or stronger hurricane.” These anecdotes, along with a cold March, prove nothing one way or the other except that human beings know very little about what drives the climate.

Germany has spent more than 100 billion euros ($130 billion) on subsidizing the solar industry; yet, as Der Spiegel reported, “the 1.1 million solar systems have generated almost no power” this winter, and Germany is forced to import power from elsewhere. They are paying three or four times the U.S. rate for electricity, making many of their industries noncompetitive. The U.S. has been equally stupid. Even The New York Times has acknowledged that the U.S. ethanol experiment has been a disaster. It has actually increased carbon emissions and the price of fuel and world food, which really whacks the poor — all because of a “fatal conceit.”