We have all been watching a long mystery with no ending: What the Federal Reserve governors are trying to do, how they intend to do it and why they imagine their efforts will work.

The key questions boil down to two: (1) What target should the Fed aim at, and (2) what policy instruments should it use to hit that target? 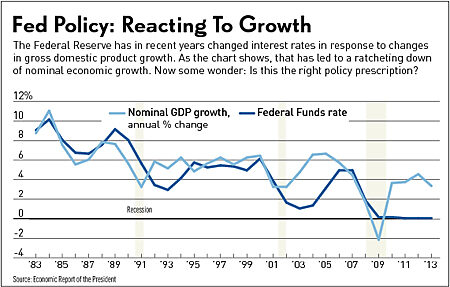 The Fed's only explicit target — an unemployment rate of 6.5% — was shrewdly discarded as "outdated" as that target grew near. Actually, the idea of focusing on unemployment is outdated, since it presumes that high unemployment guarantees low inflation — as though stagflation in 1975 or 1982 could not have happened.

Why not simply target inflation? Ben Bernanke advocated inflation targeting before 2002, when he became Fed chairman. On Nov. 21, 2002, he gave a speech warning that inflation was too low, threatening deflation.

Today, as in 2002 or 1998, many are again warning that inflation is too low — just 1.1% last year when gauged by the deflator for personal-consumption expenditures (PCE), or 1.5% over the past 12 months, according to the March consumer price index.

In the end, economic growth depends on incentives to expand and improve labor and capital.

Many other central banks do set inflation targets, but the Fed encourages the popular delusion that central bankers, like central planners, possess the knowledge and skill to boost real economic growth and employment.

Fed officials thus speak of their "dual mandate" to promote growth of the economy and jobs while keeping an eye on inflation.

Prominent economists of all stripes have proposed that the Fed should focus instead on keeping the growth of nominal GDP (NGDP) growing at a steady rate. But growth of NGDP is simply the inflation rate added to the real GDP growth rate. So how does an NGDP target differ from a dual mandate?

The graph above shows that before 2010, the Fed moved the federal funds rate up whenever nominal GDP growth picked up, and also reduced the fed funds rate when it slowed.

If the Fed reacted more promptly, how is an nominal GDP target supposed to work? 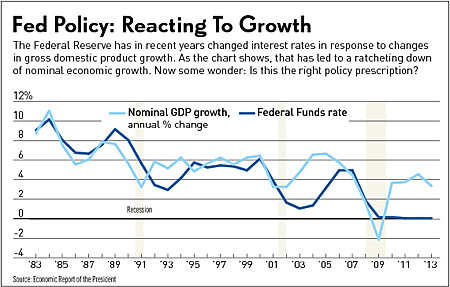 A typical proposal, from James Pethokoukis at the American Enterprise Institute, is for the Fed to keep nominal GDP growing at a steady rate of 5%. But trying to keep NGDP growing at a 5% pace means inflation would have to speed up during recessions and decline in booms.

If we had experimented with a 5% NGDP target in the past, it would mean that from 1983 to 2000, the Fed should have tightened policy more aggressively than it did during every single year but 1991.

Yet those were years of strong economic growth and declining inflation. Far from being an "easy money" period, the federal funds rate was 3.6 percentage points higher than inflation.

Swings in nominal GDP growth can be erratic, partly because of inventory cycles, foreign trade disruptions and government-spending spikes outside the Fed's control.

If the Fed decided to react to nominal GDP gyrations, then consumers, firms and investors might react badly to good news in quarterly GDP reports, anticipating that high rates must follow even ephemeral spurts in real growth.

News of any possibility of exceeding the 5% speed limit would be a strong incentive for investors to panic and for consumers and retailers to stockpile durable goods before interest rates go up.

If the Fed raised interest rates whenever nominal GDP exceeded 5%, they might just cut off the peaks in real GDP and leave the valleys.

Monetary policy is far more effective in getting people to postpone spending than borrowing when they have good reasons to save.

We know that the Fed has the power to crush real GDP — look at what happened after the fed funds rate hit 19% in January 1981.

But we do not know if Fed policy could or should induce over-leveraged families and firms to spend income they don't have.

The currently fashionable fascination with a 5% (or higher) growth target for NGDP is that it suggests the Fed should have eased more than it did in every year since 2007. Yet it's hard to imagine the Fed trying any harder than it has to stimulate demand after 2008.

The fed funds rate has been more than a percentage point below the inflation rate for years. Annual growth of the M2 money supply from 2008 to 2013 was a brisk 6.7%.

The problem with Fed policy has not been the target but the instruments used to hit the target. You can't hit a bull's-eye with a shotgun or a squirt gun. And you can't hit two targets (inflation and unemployment) with just one gun.

To the extent that Fed efforts reduced interest rates for the private sector (rather than just for Uncle Sam), such lower interest rates may have raised the demand for loans, but they also reduced the supply. Bond yields did not rise when the Fed bought fewer bonds, raising doubts that QE even accomplished its goal of twisting (flattening) the yield curve.

If it did succeed in flattening the yield curve, a flatter curve is normally associated with slower nominal growth, because banks borrow short and lend long. And super-low interest rates directly reduced the incomes of those, including seniors, holding liquid assets for security.

At the moment, neither an inflation target nor a nominal GDP target suggest that the Fed needs to discourage the growth of money or credit — regardless of how much unemployment falls as people drop out of the labor force.

If and when inflation and nominal GDP targets send conflicting messages, however, inflation is the one that matters. It can never be a matter of indifference whether the growth of NGDP consists of rapid real growth with little inflation (as in 1998), or rapid inflation with negative real growth (as in 1982).

In the end, economic growth depends on incentives to expand and improve labor and capital. Sustained economic progress has essentially nothing to do with central banking so long as inflation is held in check. The Fed can print bank reserves, but it can't print jobs.