What do you do if the facts don’t support your beliefs? If you are honest, you will rethink what you previously believed. If you are a Keynesian economist, though, like New York Times columnist Paul Krugman, you make silly assertions. In his Jan. 31 column, Mr. Krugman said he wants to see “some example, somewhere, of austerity policies that succeeded.”

Mr. Krugman seems to have forgotten that the government share of GDP dropped after Reagan was able to get most of his policies through the Democrat‐​controlled Congress (which Mr. Krugman would define as austerity). The economy boomed and employment soared. Likewise, when government spending was reduced as a share of GDP during the Clinton administration and the Republican Congress, the economy and employment boomed.

What do you do if the facts don’t support your beliefs?

Perhaps the most dramatic example of the success of what Mr. Krugman calls “austerity policies” is Sweden. Sweden expanded its welfare state and government spending dramatically in the 1960s, ‘70s, and ‘80s, until government spending as a percentage of GDP reached 67 percent by 1992, the public debt reached 70 percent, and the deficit was 11 percent of GDP. Meanwhile, per‐​capita income fell from fourth‐​highest in the world to 14th. The Swedes reversed course in the mid‐​1990s, chopping the relative size of government by a quarter, cutting the top marginal tax rate by 27 points, and this year, cutting the corporate income‐​tax rate to 22 percent (in contrast to the U.S. rate of 35 percent).

As a result of the economic reforms, Swedish debt is now only 37 percent of GDP, and the country is running a budget surplus. In its Feb. 2 report on the Swedish economic renewal, the Economist magazine notes that over the past two decades, “This allowed a country with a small, open economy to recover quickly from the financial storm of 2007-08.” 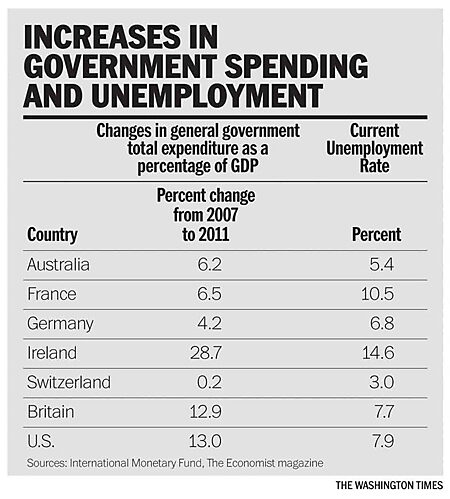 Like Sweden, Canada had allowed government to get too large by the mid‐​1990s, and growth stagnated. Canada cut the relative size of its government by about 20 percent, cut taxes, including the corporate income tax that is now only 15 percent, and moved to other pro‐​growth policies. The result is that rather than continuing to fall further behind the United States, it has been gaining on us. One positive sign is that the Canadian dollar has risen from a low of about 60 cents to be approximately equal to the U.S. dollar.

Mr. Krugman particularly complains that “harsh spending cuts” have not worked in Ireland or the United Kingdom. After their banking crisis, the Irish increased government spending as a percentage of GDP by almost 30 percent and now have cut that back so government spending is “only” about 16 percent higher than it was in the full employment days of 2007 — not exactly most people’s definition of austerity. The British, despite talking about cutting government spending, have yet to reduce it by even one full percentage point from 2011, and are still spending 11 percent more of their GDP on government than they were in 2007. Where is the “austerity,” Mr. Krugman?

Most countries had a bump up in government spending as a percentage of GDP during the financial crisis of 2008-09, and the private sector actually shrank in many countries. Many developed countries tried some measure of orthodox Keynesian “fiscal stimulus” — that is, increasing government spending. Those countries that quickly pulled it back or did not engage in it at all have had much better growth and employment than those who are still spending at much higher levels than they were in 2007. Keynesian‐​leaning economists predicted that France, the United Kingdom and the United States should have had much higher growth for each of the past three years than they did, which is what happens when forecast models are based on bad theory.

The accompanying chart shows the result of the Keynesian experiment for major developed economies, plus Ireland, Australia and Switzerland (in particular) as good examples of following more classical Austrian school economic prescriptions.

For those readers who fear that I may have been selective in my source of countries as examples, I suggest you go to the International Monetary Fund website, which contains a very extensive database for almost every country in the world for many years back.

If you have had basic courses in statistics and economics, you will not find it hard to test the proposition of whether big increases in government spending as a percentage of GDP over a few years tend to lead to higher or lower rates of economic growth and unemployment, and vice versa. While Mr. Krugman says he is still looking for examples of where the classical Austrian policies succeeded, I’m still looking for examples of where big‐​spending Keynesian policies succeeded.