Every several years, an acronym of federal climate poobahs produces a new “National Assessment” of climate change effects on the U.S. The latest one, by the National Climate Assessment and Development Advisory Committee (NCADAC) has been sent out for “expert review” to ham‐​and‐​eggers like yours truly.

After seeing it, I should add another thing to the list of things you don’t want to see being made in Washington. The new list now includes legislation, sausage, and climate assessments.

This is the third go‐​round, and as it stands, it’s the worst of the lot.

That’s saying something. The first one, in 2000, used two (out of the dozens available) climate models. One predicted the largest precipitation changes of all, and the other the largest changes in temperature. They were both wrong at the time the Assessment was published, predicting three times as much warming as was observed, and having absolutely no forecast skill estimating changes in precipitation. It seemed impossible, but the temperature predictions were worse than one could get from a table of random numbers, a rare example of what should be called negative knowledge; kinda like getting less than 25% correct on a four‐​way multiple choice test.

You would think $3.5 billion per year of global change science spending would get you some honest background analysis.

The second one, produced by the U.S. Global Change Research Program in 2009, was so bad that I produced an entire look‐​alike document (available here) for direct comparison to the government’s version, available here. The amount of material missing from the federal report was truly mind‐​boggling. Ours had hundreds more endnotes. The feds somehow missed hundreds of scientific papers repeatedly documenting the pervasiveness of the growth‐​enhancing effects of atmospheric carbon dioxide, which are obvious from satellite images of our getting‐​greener planet.

But the new one — the capstone of $3.5 billion per year’s worth of public monies — takes the cake.

These reports only rarely contain blatant lies. Instead, we are fed a mélange of half‐​truths, incomplete statements, and misquoted citations. Who really expects reviewers to dig so deep as to uncover all of these?

Well, I’ve been doing just that for the last six weeks, and will continue until the end of the comment period, which is on April 12. I’ve uncovered some real whoppers, an example of which isn’t going to do much for the sagging reputation of climate types, wounded already by climategate and various data scandals.

Most anthropogenerated climate change is mediated through changes in the two basic variables of temperature and precipitation. Here’s a precipitation forecast, given in Figure 2.12 on page 44 of the 1200‐​page tome. 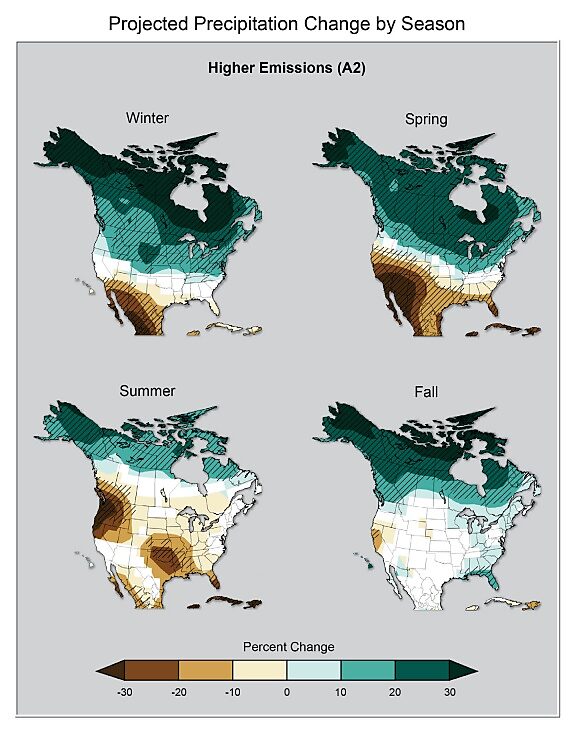 I’m showing the “higher emission” forecast because, in the following analysis, that is the one that cuts the NCADAC the most slack. At any rate, these maps still look like B-A-D stuff’s a‐​brewin’.

Where there are stripes on the map, NCADAC says that “confidence is large” and the changes are all predicted to be the same sign by their suite of 18 models.

But, nowhere in their 1200 pages is there any context or background. One can be highly confident of a forecast change, but the change can also be operationally meaningless. I’m pretty confident tomorrow is going to be a couple of degrees warmer than today, but does that make any difference to me?

So, to provide this background, I looked only at the high‐​confidence state‐​season combinations. I then calculated the standard deviation around the total observed (1901–2011) data and, given the magnitude of the predicted changes through the end of this century, totaled up how many years, with a 50–50 probability, it will take for any change in rainfall to poke its way out of the year‐​to‐​year noise. In other words, how long will it take for any forecast to become a detectable change?

There were 84 separate season‐​state combinations where confidence is large. First, the good news. In nine of these, the predicted change has already come out of the noise. Now the better news — eight of them are precipitation increases, with the most in the spring. Farmers should do handstands over that.

From there on, it’s downhill, fast. On the average, it will be 520 years before a state’s precipitation changes significantly in the summer. In the winter, 330 years. Averaged across all seasons, 297 years. That’s three centuries from now.

You would think $3.5 billion per year of global change science spending would get you some honest background analysis…or maybe you wouldn’t, because, given that detectable statewide rainfall changes are about three centuries away, why would we continue to spend this kind of money on such an overblown bunch of sausage?