Joe Biden is running a quiet campaign when it comes to policy. His messaging focuses on the state of discourse in the US, or on Donald Trump, or on the need for national unity. His pitch is that this election is both a referendum on the current President, but also a test of the “character of the nation” or “who we are”.

Yet anyone who has explored the Biden‐​Harris campaign website will be struck by how detailed the policy platform is. All the talk of character, leadership, the political oxygen sucked up by the President, Covid‐​19, and violence in cities, obscures that Biden is offering a markedly “progressive” agenda. Taken together, his manifesto is a veritable laundry list of policy demands that the left of American politics has pushed over the past five years.

His website section dubbed ‘Big Ideas’ has 29 distinct ‘Plans’, nine ‘Agendas’, four ‘Build Back Better’ proposals, a ‘Roadmap’, a ‘Proposal’ and three other programs. The number of sections is ever‐​growing too, even with notable absences. There is still no tax policy component, for example, although there are tax increases or new tax credits advocated as part of issue‐​specific plans.

All the talk of character, leadership, the political oxygen sucked up by the President, Covid‐​19, and violence in cities, obscures that Biden is offering a markedly “progressive” agenda.

Together, these 47 plans cover most aspects of life, but go far beyond bread‐​and‐​butter issues. We might imagine that any Democratic candidate would propose a Keynesian response to the Covid‐​recession, a public health plan for the pandemic, and proposals for healthcare, childcare, and even “encouraging unions and empowering workers”. But we also find proposals for “environmental justice,” an ‘agenda for the Catholic community’, and ‘middle‐​class competitiveness’, among other things.

Unsurprisingly, very few of each of these plans liberalises economic activity or facilitates private, voluntary cooperation to solve economic or social problems. There’s little here for us classical liberals. With the notable exception of occupational licensing reform, almost all Biden’s policies create new programs or subsidies, new mandates or regulations, or suggest new tax carve‐​outs or government privileges. A better tagline than ‘Build Back Better’ — the slogan Biden has used, Boris Johnson‐​like, to describe what he wants to achieve post‐​Covid — might be ‘Build Bigger Government’.

None of this means Biden is a ‘Trojan Horse for Socialism’ as Donald Trump has claimed. The former Vice‐​President doesn’t want government to own the means of production, nor even introduce the wealth taxes and Medicare‐​for‐​all beloved of the harder left. Nor does he go as far as the continental‐​style corporatism that would have been offered by, say, Elizabeth Warren — making businesses full lapdogs of the state. Yet his agenda would represent a sharp shift left for the country and is quintessentially progressive: using the state’s redistributive and regulatory power to shape economic and societal outcomes to conform with leftish conceptions of how the world should look.

Historian Niall Ferguson has described it as an old‐​school tax‐​and‐​spending platform, bringing, as a recent analysis from Penn Wharton has shown, much more of the latter than the former. And there’s truth to this. Scarred from left‐​wing criticism of Obama‐​Biden delivering insufficient stimulus in 2008/09, Biden’s team has briefed that he would go as large as possible on a coronavirus stimulus package if elected with a Democratic Congress. When you add this to the permanent spending plans proposed, conservative budget wonk Brian Riedl estimates Biden would add $11 trillion in US federal spending over the next decade. That averages to around five percentage points of current GDP per year–a much larger uplift than proposed by other recent Democratic presidential candidates.

But spending alone doesn’t account for the growing scope of government activity he proposes, particularly on regulation. On the labour market, for example, Biden wants at least a $15 federal minimum wage, federal subsidies for “short‐​time” working, and a legal overhaul to empower unions. He would have renewed the $600 per week pandemic unemployment insurance benefits that paid 69% of unemployed workers more than they were earning prior to Covid‐​19.

He wants an activist industrial strategy to dovetail with a mercantilist trade policy to encourage more activity in manufacturing. Almost in a throwaway line, his website suggests implementing “a broad definition of “employee” and tough enforcement to end the misclassification of workers as independent contractors”. This sounds an awful lot like the controversial AB-5 law in California that is crushing the gig economy.

These interventions, combined, constitute radical changes to the US labour market — an area of policy, let’s not forget, that most economists believed was working very well until the pandemic hit. Yet there are similarly large changes proposed for energy and healthcare too, not to mention his apeing Trump’s retrogressive trade policy.

Now, my colleague Scott Lincicome is right to warn us that presidential platforms often prove a poor guide to policies delivered in office. The US isn’t a parliamentary system. But at the very least this manifesto signals what Biden the candidate would like to achieve in government, or, perhaps in this case, what Biden’s campaign thinks those seeking out the platform online want to see.

Biden is said to represent the centre of the Democratic party. If so, his platform shows just how far the party has lurched to the left over the past decade. At times, his agenda reads like a negotiation with the ascendant left. The resulting document is a trenchant progressivism — an agenda firmly based on the idea that planners and regulators can coerce us in the service of eliminating injustices, spreading opportunity, and protecting us from all sorts of market failures. The giveaway is the repeated use of the verb “to mobilize” — a term used by the left to convey the urgency by which we all should prepare to organise society in the service of progressive objectives.

The Biden Agenda: What Would a Biden Administration Do on Trade? 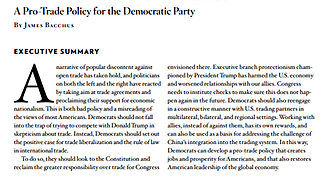 Democrats and Trade 2021: A Pro‐​Trade Policy for the Democratic Party

Biden Wants to Return to a ‘Normal’ Foreign Policy. That’s the Problem