If China were a Eurozone country, it would likely be regarded as the next victim of the bond vigilantes.

The People's Republic has more than doubled its stock of private credit relative to GDP in the last ten years, even as output grew at annual rates exceeding 6.5 per cent. Indeed, China accounts for fully one-third of the global increase in private debt since the financial crisis.

Only Ireland and Spain, at the height of their ill-fated housing booms, can rival the Chinese credit explosion in rapidity and scale. 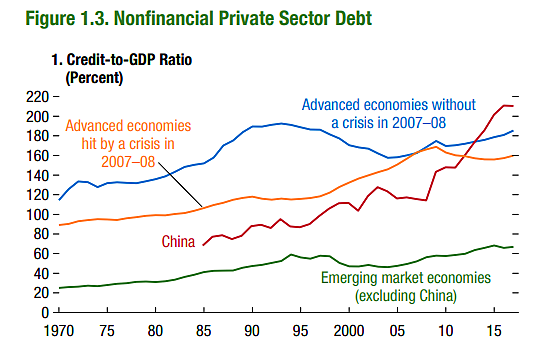 Investors might be reassured if Chinese credit markets were free and transparent. But that is manifestly not the case. Lending is dominated by the "Big Four" state-owned banks that were spun off from the People's Bank of China in the 1980s, as market reforms got under way. They still account for 60 per cent of bank assets, most of which are loans to state-owned industrial enterprises, often extended according to political rather than business criteria.

The retail side doesn't look much better. Until October of 2015, bank deposit interest rates were capped. Such financial repression not only fattened bank profits at the expense of their depositors, but it also encouraged Chinese savers to reach for yield by buying houses, speculating in illiquid stocks of largely state-owned companies, and acquiring investment products in the country's burgeoning shadow banking sector. All three markets have of late shown signs of overheating.

If China were a Eurozone country, it would likely be regarded as the next victim of the bond vigilantes.

Not all is bad news. Non‐​performing loans, which in the wake of the 1997 Asian financial crisis represented an eye‐​popping 25 per cent of total loans, have been brought down to manageable levels through a mixture of public and private recapitalisation, and the purchase on favourable terms of toxic assets. But even here, Chinese taxpayers have had to pick up the tab for the bad decisions of state cronies.

And it hasn’t been the astute management of Communist Party chiefs that has helped the country avoid a financial crash so far, but the breathtaking growth rates that China averaged between the early 1990s and 2008. When an economy is growing at 10 per cent per year, the weight of bad loans can halve in ten years, even with the absolute value of bad loans growing annually at 3 per cent.

But a number of things have changed since 2008. Firstly, Chinese growth seems to have permanently slowed. Official growth rates have hovered around 6.5 per cent since 2015, one‐​third below the pre‐​crisis norm.

Even that may be an overestimate according to sceptics, who argue that local government statisticians have incentives to inflate output figures, and that the preponderance of state‐​owned enterprises whose production is only partly market‐​based makes assessing true value‐​added more difficult than it is in the West. Li Keqiang, a former Premier, himself distrusted official GDP statistics and advised analysts to use alternative measures, such as freight volumes and electricity generation.

A slower growth rate makes a given burden of bad loans harder to shoulder. If it is accompanied by a $20 trillion increase in the stock of private debt, as has happened in China since 2008, the chances to outgrow any large bad bets become even slimmer. Anecdotal evidence of empty apartment blocks in ghost cities, and of a factory slowdown as US tariffs start to bite, supports the case that this time may indeed be different from the past.

Yet there are reasons to be hopeful. The October 2015 interest‐​rate liberalisation made financial repression a thing of the past. Local governments, whose budget constraints were dramatically loosened in 2009 in a bid to stimulate the Chinese economy, have had to retrench as banks made lending terms stricter under pressure from the central government.

Increased foreign participation in China’s financial sector, through direct stakes in banks and insurers, and greater links between mainland and foreign stock markets, will hopefully improve the corporate governance of firms.

All of them combined will make it less likely for credit to continue to flow to unprofitable firms, for asset bubbles to be stoked by interest‐​rate meddling, and for listed companies to be run for the benefit of insiders rather than that of shareholders.

Whether these measures came too late to save China from an extensive writedown of bad debts is an altogether different question. Both short‐​term factors, in the form of rising trade tensions, and the long‐​term prospect of rapid population ageing as a result of the Communist Party cataclysmic one‐​child policy (now thankfully defunct), will complicate dealing with the country’s mounting debt pile.

China is a middle‐​income country — its GDP per capita still just one‐​seventh that of the United States — with rich‐​country indebtedness and demographic trends. There are large income differences between the richer eastern provinces, which liberalised first and have continued to do so rapidly, and the western regions which have lagged on market reform. But the point remains that China will soon grapple with problems that historically have confronted only more mature economies.

Nor should Europe and America be complacent, let alone gleeful, about Chinese difficulties. The People’s Republic is now the world’s largest economy, accounting for 18.7 per cent of global output at last count. Even if its links to the rest of the world are more tenuous than those of Western countries, a Chinese credit crunch will be felt further afield — and we will all suffer for it.