Those of us who perseverate on climate change couldn’t help but notice that U.S. temperatures in 2012 were really warm; boosted, in large part, by the virtual lack of a second half of last winter. At the same time, global readings weren’t particularly weird, given the run of the last couple of decades.

Despite the fact that much of the original data are REBAR (Reprocessed Beyond All Recognition), it’s still safe to say that the last twenty years average out as the warmest in the instrumental record, which is reliable for about 120 years.

Global readings weren’t particularly weird, given the run of the last couple of decades.

What gives with 2012 in the U.S.? Start with the fact that the “U.S. history” is restricted to the coterminous 48 states. Geographically small‐​sized anomalies (both hot and cold) of major proportions show up every year, and 2012 picked on us. A similar sized one was the 2003 European heat wave, one of the deadliest in modern history, which was embedded in what, hemispherically, was an unremarkable summer.

When speaking of U.S. temperatures, there’s no real reason to restrict analyses to the coterminous states, especially given the fact that Alaska comprises a bit more than 17 per cent of our total land area.

Alaska’s statewide history, which the National Climatic Data Center (NCDC) supplies back to 1918, doesn’t look very much like what we have come to expect, given daily climategeddon reports emanating from the Arctic. Here it is: 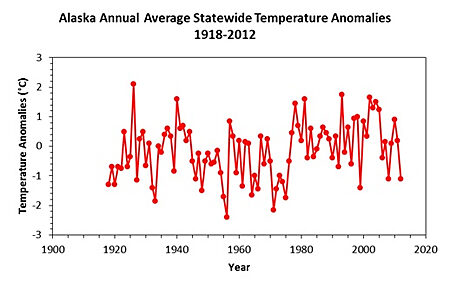 What’s noteworthy about Alaska’s history is the step‐​change that takes place around 1977, something recognized (in hindsight, 15 years later) as the “Great Pacific Climate Shift”. As has repeatedly been emphasized by the people at the Alaska Climate Research Center at the University in Fairbanks, there’s simply no net warming averaged across the State since then. There is a sharp warming along the Arctic coast in the late summer and fall—due largely to recession of late summer ice—but even that’s not enough to push ths statewide trend into positive territory since the Shift. 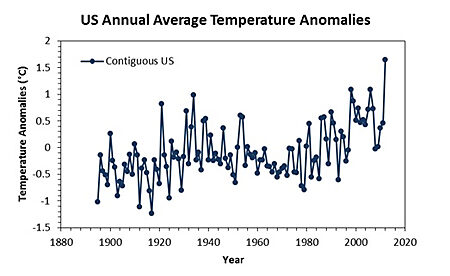 It’s safe to say that 2012 just didn’t beat the coterminous‐​48 record—more like it got crushinated.

There’s an ongoing debate as to whether 1934, 1998 or 2006 is the previous record holder—different analyses (think REBAR) keep them switching places, but, having said that, the next one cooler than those years is only a couple of tenths of a degree (C) behind. The difference between 2012 and 1934, 1998 or 2006 is over three time that amount.

So now let’s add the two records together, weighting for relative area, with Alaska at .17 of the total and and the conterminous 48 the remaining .83 (Hawaii, at .002 of the national area, is inconsequential): 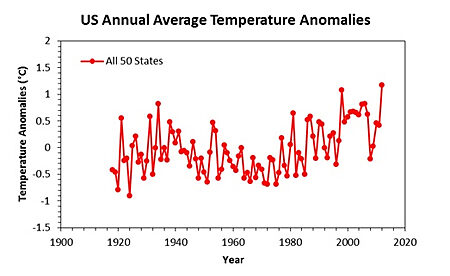 A couple of things jump out. The addition of the Alaska data clearly shows 1998 as warmer than 1934. 2006 becomes unremarkable, and 2012 beats 1998 by less than a tenth of a degree (C). So much for crushinating the record—it was barely bested.

Mine US Minerals — Don’t Undermine Them