Economists generally like to separate factors that impact the business cycle from factors that affect long run economic growth. It’s often assumed that monetary policy can impact the cycle but not long‐​term growth. While there is some truth to this claim, I will show that improvements in monetary policy can impact long‐​term economic growth, at least according to one commonly used definition.

First we need to consider a subtle distinction between two different ways that a change in "growth" might occur. Consider the roughly 3 percent trend rate of real GDP growth in the United States over the past 150 years. In the 1930s real output fell well below the trend line, and in the early 1940s output rose far above the trend line. But long-term growth has been relatively stable in the United States, more so than many other countries. 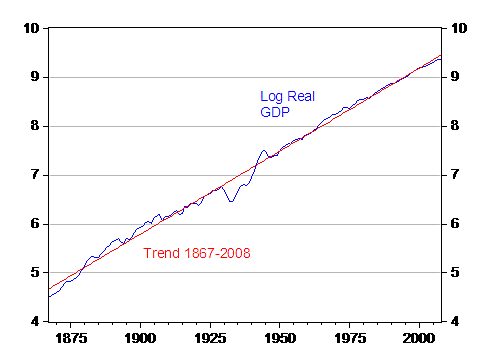 When people talk about boosting economic growth, they are actually describing two very different phenomena. One would be vertical shift upward in the long-run trend line, without any change in slope. This might be accomplished by improvements in economic efficiency. For instance the countries of Western Europe have per capita GDP's (PPP) of roughly 60 to 80 percent of U.S. per capita GDP. Some economists believe that if these countries reduced explicit taxes on labor, and also the implicit taxes that result from generous benefit programs, then hours worked in Western Europe would rise closer to US levels. This would lead to a one time upward shift in real output, even though the adjustment might occur over many years, and indeed even a few decades. But in the long run, growth would continue at roughly the same rate as the United States.

At other times, talk about boosting economic growth implies an increase in the slope of the output trend line, perhaps from 3 percent per year to 4 percent per year. This is generally viewed as being more difficult to achieve, particularly in the very long run. The only policies that are likely to do this (at least in per capita terms) are those that increase the global rate of technological progress. Of course it is not at all clear that any government has the ability to do this on a sustained basis, although subsidies for basic research in science might conceivably have some impact on the long-term trend rate of growth. In my view, most proposals to boost "growth" are much more likely to produce a one time upward shift in the output trend line, without changing the slope, i.e., the long-term trend rate of growth.

Here I'll suggest two reasons why improved monetary policy may be able to produce the same sort of parallel upward shift in the real output trend line as we see after other supply-side reforms, without changing its slope. First, improved monetary policy can reduce the severity of the business cycle. In basic textbook models this has no impact on the trend line. But more sophisticated models suggest that the business cycle is not symmetric, and that a more stable business cycle would result in a higher average level of employment, and output. Second, cyclical instability often leads governments to enact counterproductive policies in other areas, such as bailouts of failing businesses and increased government spending. These policies also reduce the level of GDP over time, without changing the long run trend rate of growth.

Both the Great Depression and the Great Recession provide almost textbook examples of how monetary policy can reduce economic output. Most economists believe the natural rate of unemployment in the US is about 5 percent. When monetary policy is too expansionary, unemployment falls below 5 percent, but generally not below 3 or 4 percent. Thus during the boom decade of the 1920s, unemployment was only modestly below the natural rate, even during the most prosperous years. And let's not forget that even during the 1920s there were actually three recessions, one short but very deep recession in 1921, and very short and mild recessions in 1924 in 1927. In contrast, the contractionary monetary policy of the early 1930s pushed the unemployment rate up to 25 percent. Admittedly some of this was due to counterproductive labor, tariff and tax policies by President Hoover, but the monetary policy alone (which cut nominal GDP in half) was contractionary enough to cause at least 15 to 20 percent unemployment. And of course unemployment remained high all the way up to 1941. The lost output from the Great Depression was far greater than the extra output associated with the Roaring 20s.

Modern economists have developed models to explain the asymmetry of the business cycle. One factor is obvious; unemployment cannot fall below zero, whereas it can rise far above 5 percent. But there's more to the asymmetry than mathematics. There is some evidence that workers suffer from money illusion, making nominal wage cuts especially difficult. It is true that nominal wages are also sticky in the upward direction, due to long-term labor contracts, but money illusion does not generate an extra degree of stickiness on the upward side as it does when wage cuts are needed. Thus persistently contractionary monetary policies can lead to rather extended periods of high unemployment as we saw in the 1930s and again in the period after the 2008 Lehman crisis. In contrast, overly expansionary policy only boosts output modestly, and for a shorter period of time.

Some new classical economists are skeptical of claims that tight money can lead to persistent periods of high unemployment. I do have some sympathy for this skepticism, as it's hard to provide convincing models of why nominal shocks would have long-term real effects. However, these economists often ignore the way that nominal and real shocks can become entangled. Here I'll provide three examples of how bad monetary policy led to bad supply-side policy, which resulted in a more persistent loss in output than would have otherwise occurred.

After Roosevelt took office in March 1933, monetary policy improved and deflation ended. Of course we were still deep in depression with nearly 25 percent unemployment. Like Hoover, FDR adopted policies that would not have occurred if the economy had not been deeply depressed. Perhaps the most counterproductive policy was the ironically named National Industrial Recovery Act, which dramatically raised wage rates and aborted the brisk recovery in industrial production that followed the devaluation of the dollar. He also dramatically increased government spending and raised income tax rates even higher than Hoover. Firms were encouraged to form cartels and to restrict output. As late as mid-1940 unemployment was far above 10 percent, seven years after Roosevelt took office.

Another example occurred in Argentina between 1990 and 2014. Between 1990 and 1997, economic growth in Argentina was quite rapid. This reflected improvements in the supply-side of the economy resulting from neoliberal economic policy reforms. After 1997, however, the Argentine peso became increasingly overvalued. This was partly due to the fact that Argentina's competitors, such as Brazil and Russia, sharply depreciated their currency in the wake of the East Asian crisis of 1997 – 98. In addition, the US dollar strengthened during the high-tech boom of the late 1990s. Because Argentina had fixed its currency to the dollar using a rigid currency board arrangement, it was politically difficult to devalue the currency. Especially with the public having fresh memories of the hyperinflation of the 1980s.

Although this policy error was understandable, it resulted in falling nominal GDP and mass unemployment. As in the 1930s, the public wrongly blamed free market capitalism for what was actually a monetary policy failure. The result was a more left-wing government, which sharply devalued the currency, much as Roosevelt did in 1933. Despite the bad supply-side policies enacted by the populist left-wing government, the currency devaluation led to a sharp rebound in real economic growth. But this was fool's gold, as the statist policy interventions gradually undermined the neoliberal reforms of the 1990s, and by 2014 Argentina was again teetering on the edge of bankruptcy.

The most recent example occurred in the United States. Between mid-2008 and mid-2009, policy errors by the Federal Reserve allowed nominal GDP to fall about 4% below trend. This led to mass unemployment, which triggered all sorts of counterproductive policies. Just as in the Great Depression, the counterproductive policies began under a conservative Republican president and accelerated under a more left-wing Democratic president. Even as early as 2008, President Bush was enacting all sorts of bad supply-side initiatives, including ineffective fiscal stimulus (with no positive supply-side aspect) in the spring of 2008, extended unemployment compensation in the summer of 2008, and bailouts of failing automakers and banks in the latter part of the year.

President Obama continued many of Bush’s policies and indeed sharply accelerated some of them, extending unemployment insurance to a record 99 weeks. Obama also sharply increased tax rates on capital income and accelerated the pace at which the government created new regulations. And of course there was also the massive fiscal stimulus program, which actually had little or no impact on output due to monetary offset. Nonetheless, Obama’s fiscal stimulus leaves a legacy of debt, which must be serviced in the future by distortionary taxes that will create a drag on growth. In contrast, free-market policies did better during the long period of fairly stable nominal GDP growth, from 1984 to 2007.

I would certainly not claim that monetary policy is the most important determinant of the long-run growth rate in the economy. The textbooks are correct that its main impact is on the business cycle. There are other policy reforms that would do more. But it does offer one of the cheapest ways of boosting growth. Unlike fiscal programs such as infrastructure, there is virtually no cost to improving monetary policy. And unlike supply-side tax cuts, there are no significant political barriers.

Elsewhere (2014) I've argued that a policy of nominal GDP targeting would smooth out the business cycle and undercut many of the arguments for counterproductive policies such as fiscal stimulus and/or bailouts. After all, if the Fed sets its policy instruments aiming at $18 trillion in nominal spending for 2015, then the effect of bailing out one company would simply be to steal jobs from another. And any increase in government spending would be offset by tighter money, and a reduction in private spending.

We need to convince other economists that nominal GDP targeting is the way to go. Once we do so, the Fed will follow the consensus.

Scott Sumner. How Nominal GDP Targeting Could Have Prevented the Crash of 2008.” In Boom and Bust Banking: The Causes and Cures of the Great Recession, edited by David Beckworth, 2012, pp. 129-64, The Independent Institute, Oakland, CA.

“Why the Fiscal Multiplier is Roughly Zero.” Mercatus on Policy, Mercatus Center, 2013.

A More Future‐​Focused Government Would Have Radical Policy Implications