The Economic Freedom of the World: 2017 Annual Report, copublished by the Fraser Institute and the Cato Institute, features a wealth of new data on economic freedom worldwide — and for the first time, the report adjusts for inequality in economic freedom in countries that do not afford equal rights to men and women. Since restrictions on the economic freedom of women significantly limit the size of that country’s markets and its potential growth, the authors reason, a measure of economic freedom should take into account whether all members of a society are economically free. 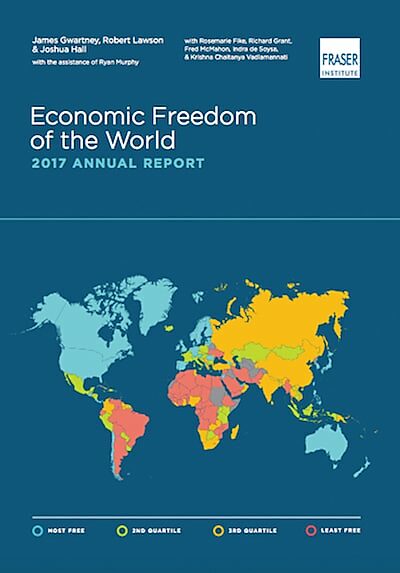 While many countries were not affected by this adjustment, some countries, such as Qatar, Saudi Arabia, Bahrain, and the United Arab Emirates, saw their ranking drop by more than 20 places. The index’s authors based their adjustment on World Bank data on gender disparity, which considers questions such as whether men and women have equal property rights and equal inheritance rights and whether married women can open bank accounts, get jobs, and sign contracts in the same way as married men. The report also reviews the trends in gender disparity since 1970 — gender equality has been on the rise in the past few decades, and they find a positive relationship between economic freedom and gender equality.

The United States ranked 11th in this year’s report — up a bit from last year’s 13th (when adjusted for gender disparity), but still far below its 2000 ranking, when it stood in 4th place. Hong Kong and Singapore remained the top two most economically free countries, followed by New Zealand, Switzerland, Ireland, the United Kingdom, Mauritius, Georgia, Australia, and Estonia.

The report also features a timely chapter on the relationship between economic freedom and support for anti-immigrant populist parties. Many believe that the success of these parties follows from high immigration levels, or from increased economic liberalism, which create more competition and give rise to nativist sentiments. But the authors do not find support for these theories. Instead they find that countries with less economic freedom and high welfare spending are more likely to support nativist, populist parties.

Throughout the world, the Economic Freedom of the World report continues to demonstrate the clear connection between economic freedom and other types of freedom and prosperity. The income of the poorest 10 percent of a country’s population is much higher in economically freer countries, for example, and greater economic freedom is associated with more political rights and civil liberties.