As the presidential campaign heats up, you can count on a renewed, energetic debate over voter identification (ID) laws. Interestingly, few Americans are aware that the Constitution does not guarantee the right of individuals to vote for president. Under Article II, the manner of choosing presidential electors is up to the states. But, said the Supreme Court in Bush v. Gore (2000), “[W]hen the state legislature vests the right to vote for President in its people, the right to vote … is fundamental.” That means government has a high burden to defend voting restrictions.

To legitimize a voter ID requirement, a state would have to show: (1) there’s significant voter fraud, (2) the law would fix the problem, and (3) there’s no better way to accomplish the same ends without voter IDs. It’s not up to voters to prove they are entitled to vote; it’s up to government to prove it’s justified in stopping them from voting. Still, some proponents of voter IDs make this case: We have to show an ID to drive, cross the border, board a plane, cash a check, and buy liquor. Why not an ID to vote?

First, consider drivers’ licenses: Unlike voting, there’s no express constitutional protection for the right to drive. Driving can be dangerous; a license confirms that the driver possesses basic skills so as not to harm innocent bystanders. Second, crossing our borders: Nearly all legal scholars agree that the federal government is constitutionally empowered to restrict immigration. By contrast, the government is constitutionally barred from most discriminatory voter restrictions. Third, boarding a plane: There’s no guaranteed right to fly; and airlines, as private entities, impose numerous restrictions — including, most obviously, the price of a ticket. The government’s ID requirement was asserted after 9/11 as a national security matter. Fourth, cashing a check: The Constitution constrains government, not private entities. So restrictions imposed by private banks aren’t constitutionally barred. Further, if anyone could withdraw money from anyone else’s account, the potential for rampant fraud would be selfevident. Fifth, buying liquor: An ID attests to legal age. For voting, age is established at registration.

Even if no voter ID is required, you cannot simply walk into a polling booth and vote. You have to be registered and provide a name, which is checked against the registration list. You may also be asked for an address, personal information, and maybe a signature to compare with registration documents. Fourteen states require nothing more. If those states had a problem, you’d expect to see multiple voters using the same name, or would‐​be voters using names not on the registration lists. And yet, academic researchers, government investigators, and multiple federal courts have found negligible evidence of voterimpersonation fraud.

Despite the lack of evidence, proponents of voter IDs ask, “What’s the big deal about requiring an ID?” Almost everyone has one; and the rest can get one easily and inexpensively. But a study from the Brennan Center at New York University indicates that roughly 11 percent of Americans over age 18 — that’s 21 million citizens — don’t have a photo ID. And half of married women have names that don’t match the names on their birth certificates.

Even if IDs were readily available and free, that would not validate requiring everyone to obtain an ID before voting — any more than it would validate requiring an ID to speak at a rally. Voting, like speaking, is a fundamental right, which must not be compromised unless there’s an identified problem that an ID would cure. Repeated studies show that in‐​person fraud — the only kind that can be caught by voter ID laws — is essentially nonexistent. The real problems include bogus counts, absentee ballot abuse, outdated voting machines, hours‐​long lines, and cyberattacks — none of which can be redressed by an ID. What, then, should be the framework for assessing the need for voter ID laws? Several points seem obvious. First, opponents of voter ID laws do not condone fraud. But they oppose ID laws that haven’t been proved necessary. Second, voters should not be compelled to obtain an ID unless it would remedy a demonstrated problem. Third, no one dismisses the possibility of fraud. But let’s see evidence, not just anecdotes: How much fraud? Where? How often? Is the incidence sufficient to insist on an ID from everyone who wishes to vote? How do jurisdictions where IDs are required compare with jurisdictions where they aren’t required? Have there been significant reductions in fraud since voter ID laws were implemented? That’s the kind of data we should demand when government proposes to encroach on an expressly conferred right. 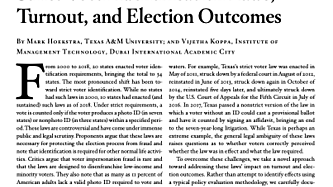