Part of Cato’s mission is to change the intellectual landscape in the belief that public policy is downstream of ideas. As part of that effort, the Institute’s scholars spend much of the year crisscrossing the country to address students on campus, bringing the ideas of liberty to the next generation. Addressing a wide variety of fields, these presentations often offer students new perspectives not heard in the classroom. 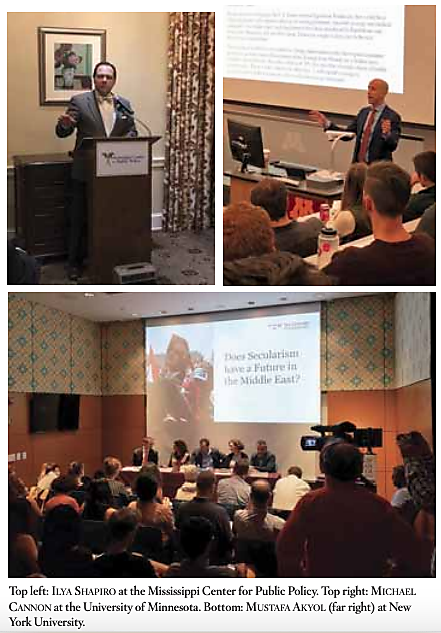 Matthew Feeney is the director of Cato's Project on Emerging Technologies, where his work touches on hot-button topics such as internet regulation, privacy, and the Fourth Amendment. During the 2018–19 academic year, Feeney spoke to students at Northern Illinois University during a symposium on the "gig economy," discussing how regulators have responded to the emergence of companies such as Uber for ridesharing and Airbnb for short-term lodging. At Florida Gulf Coast University, he participated in a three-way debate on conservatism, progressivism, and libertarianism sponsored by the university's Students for Liberty, College Democrats, and College Republicans. In addition to Feeney's defense of libertarian principles, the event sought to highlight the potential for civic discourse between ideological opponents.

Walter Olson serves as a senior fellow at Cato's Robert A. Levy Center for Constitutional Studies and is known for his writing on the American legal system and on political topics such as judicial nominations and gerrymandering. With his unique libertarian perspective, he has been invited to address events hosted both by progressive LGBT-rights organizations and by religious conservatives, a rare combination. (See also "Adoption and the Anti-discrimination Wars," Cato Policy Report, Sep./Oct. 2018.) In October, Olson participated in a panel discussion hosted by Lambda Law Alliance at the University of Virginia School of Law on LGBT participation in electoral politics, as well as in Federalist Society events on nondiscrimination and employment law at Washburn University School of Law and the University of Kansas School of Law. With nominations to both the Supreme Court and lower federal courts featured heavily in the news at the time, Olson also spoke at The Catholic University of America's Columbus School of Law for its law review's symposium on federal courts.

Cato scholars are also frequently invited to speak about books they have written. Cato senior fellow Michael Tanner recently published a book, The Inclusive Economy: How to Bring Wealth to America’s Poor (Cato, 2018), to bring a fresh perspective to debates over anti-poverty policy and to break out of the usual left-right stalemate. Because this topic is of particular interest to students preparing to enter careers in public policy, Tanner spoke at the University of Vermont, the University of Texas, the University of Michigan, the University of Wisconsin, and Northwood University during the 2018–2019 academic year.

Student groups and professors are always welcome to invite Cato scholars to speak on their campus. With dozens of scholars across a range of public policy topics, Cato has a libertarian expert ready to address just about any area of interest. In addition to directly contacting relevant scholars, invitations can be submitted through the speaker request form on cato.org.