Back in 1977, the Communists controlled a third of the world, textbooks said that the Soviet Union would soon have a larger GNP than the United States, and the federal government’s most recent accomplishments were Vietnam, Watergate, and stagflation.

It was in that environment that Ed Crane and Charles Koch decided to create a libertarian think tank. This year we’re celebrating the Cato Institute’s 40th anniversary. As I’ve written in this space before, there have been policy ups and downs in those 40 years. Libertarians are a disgruntled bunch and usually focus on the downs— out-of-control spending, increasingly governmentdominated health care, a soaring incarceration rate, and so on. We often forget about the ups—the end of the draft, lower marginal tax rates, deregulation in the Carter-Reagan years, more social tolerance, and equal rights.

Today I’ll just focus on Cato’s growth in those 40 years. We’ve grown from about 15 employees to 150, with commensurate budget growth. We’ve gone from rented office space in San Francisco to a 70,000-square-foot building that we designed and built in downtown Washington. Ed Crane has said that his central insight for libertarian success was to put libertarians in suits and ties. And that was part of the original formula we followed. 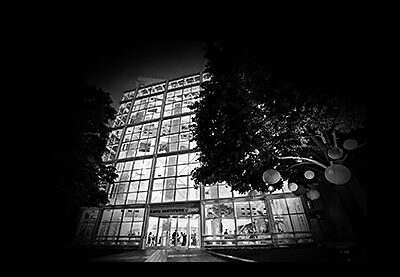 Commitment to libertarian principles
From the beginning, our task was to apply the ideas of John Locke and Adam Smith, the American Founders, Ludwig von Mises and F. A. Hayek, Ayn Rand, and Murray Rothbard to contemporary policy issues. Our focus was always on public policy, but we also had an interest in the underlying ideas of liberty. Programs such as Cato University, research seminars for new employees and interns, books such as The Libertarian Mind and The Encyclopedia of Libertarianism, and, more recently, the website Libertarianism.org explore classical liberal and libertarian ideas.

Building on those principles, our analysts have written about a wide range of issues—economics, civil liberties, personal freedom, the rule of law, foreign and defense policy—in more than 300 books, 1,500 studies, and 2,000 articles in journals.

Usually people liked our principled approach, even if they disagreed with some of our scholars’ policy positions. But not always. Some of our friends didn’t like our scholars’ opposition to the first Gulf War. Executives at Microsoft appreciated our criticisms of the antitrust case against the company, but not our criticisms of software patents and “net neutrality,” although they were rooted in the same freemarket principles. Some of our friends at other free-market think tanks advocated the individual mandate and helped Mitt Romney develop the precursor of Obamacare.

Independence
We also value our independence. That means we seek and accept no government funding, we are strictly nonpartisan and aligned with no special interest, and we don’t line up with either the red team on the right or the blue team on the left. Sometimes that left us almost alone—proposing private accounts for Social Security in 1980, for instance, or warning about the danger of a war in Iraq as early as 2001.

It’s that independence—or what George Will called our “contrarian spirit” on the occasion of our 25th anniversary—that has garnered respect across the ideological spectrum. Ezra Klein, founder of Vox.com, said in 2012, “When I read Cato’s take on a policy question, I can trust that it is informed by more than partisan convenience. The same can’t be said for other think tanks in town... . Cato’s credibility is derived from its independence.”

Radical ideas, mainstream presentation
From the beginning, we intended to present some pretty radical ideas—not radical by the standards of the Declaration of Independence and the Constitution, but by 1970s public policy standards—and we knew that it was important to present them in a mainstream way. So suits and ties, yes. But also well-researched studies—scholarly, accessible, and nonpolemical, with professional editing and design. And in our events and journals, we tried to generate a conversation among libertarian scholars and moreestablishment thinkers and policymakers. Not to mention a signature building on Massachusetts Avenue.

We can point to a lot of specific accomplishments over our 40 years—the 300 books, our pathbreaking conferences in the Soviet Union and the People’s Republic of China, our annual conferences on monetary policy and Supreme Court jurisprudence, our three-hour educational freedom documentary appearing right now on public television stations—but I think our major achievement has been creating a presence for libertarian ideas in Washington and in the national policy debate.

And that’s the foundation we want to build on for the next 40 years.

A More Future‐​Focused Government Would Have Radical Policy Implications