Three or four years ago people were talking about a libertarian moment — and we played a role in creating that moment (see “Mainstreaming Libertarianism,” Cato Policy Report, July/​August 2014). Now we’ve had Trump and Sanders and Hillary Clinton — and Corbyn and LePen — and people are talking about nationalism and socialism and protectionism. 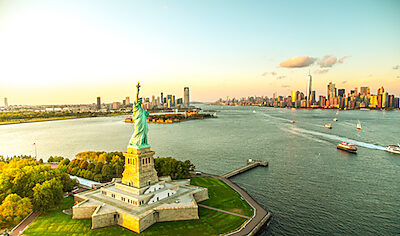 Ideas and threats we thought were dead are back from the ash‐​heap of history, with authoritarianism on both the left and right. Not just in Russia and China, but also in Turkey, Egypt, Hungary, Venezuela, the Philippines, maybe India — and too close for comfort in France and Austria. And even here in the land of the free we have elected a president who seems to have no respect for the Constitution or the rule of law. He’s not the first in that respect, but his personal disdain seems something new.

Globalization, as we’ve discussed in many books and articles, is a great boon to the world. It means more specialization and division of labor, which makes rich countries richer and brings poor countries out of crushing poverty. But economic progress inevitably means change. And change can be painful. Think of the transition from 90 percent of American workers working on farms, to about 2 percent today. Now we’re in similar transitions from manufacturing to services and robots.

Some people get hurt in such transitions. And when people perceive a decline in their income or their relative social status, they often want help, and they want to blame someone. That can mean both a demand for government programs and the scapegoating of villains — whether it’s the bankers, the trusts, the Jews, the Chinese, or the Mexicans. This is just the opposite of the individualist liberalism that we defend and advance. These instincts can result in bad policy, or worse — closed borders, pogroms, authoritarianism.

In the 1930s there were complaints that liberalism was ineffectual, unable to deal with the economic crisis. And as we know, the response then was disastrous. One complaint then — which we also hear these days — is that Congress can’t get anything done. That’s an attitude that often precedes a turn to authoritarianism. In the United States and Europe, fewer young people tell pollsters that it’s essential to live in a democracy. Nearly 50 percent of young Americans say it would be a good idea to have “a strong leader who doesn’t have to bother with Congress or elections.”

This reminds me of something Hayek wrote in The Road to Serfdom. He said that in the stage that precedes the suppression of democracy, you hear demands “for quick and determined central government action … dissatisfaction with the slow and cumbersome course of democratic processes … Action for action’s sake [becomes] the goal. It is then the man or the party who seems strong and resolute enough to ‘get things done’ who exercises the greatest appeal.”

Can American institutions resist these pressures? I remain optimistic — despite all these challenges, it’s still true that around the world, more people in more countries than ever before in history enjoy religious freedom, personal freedom, democratic governance, the freedom to own and trade property, the chance to start a business, equal rights, a higher standard of living, and a longer life expectancy. Immigration flows are always from less‐​free to more‐​free countries, creating some challenges but also demonstrating a broad preference for liberal societies.

There’s also this: the rise of liberalism and the Industrial Revolution revealed to people that progress is possible, that economic change can bring rising standards of living. Once people realized that, they wanted growth to continue. In the long run, people will not reject the institutions that produce growth and progress.

Socialism doesn’t deliver the goods. Cronyism and tax‐​and‐​spend policies reduce economic growth. When people get a taste of growth, they want it to continue. And the economic freedom that leads to growth also gives people a taste for making their own decisions, which tends to spill over into a demand for political, cultural, and lifestyle choices.

We are reminded once again that we need a positive vision of liberalism, how it is rooted in American values, and how it makes lives better. We want everyone to flourish, to be free to pursue happiness in his or her, or indeed hir, own way.